There are numerous coordination compounds that have been synthesised and characterised.

In the earlier days, the compounds were named after their discoverers. For example, K[PtCl3(C2H4)] was called Zeise’s salt and [Pt(NH3)4][PtCl4] is called Magnus’s green salt etc...

There are numerous coordination compounds that have been synthesised and characterised. The International Union of Pure and Applied Chemistry (IUPAC) has developed an elaborate system of nomenclature to name them systematically. The guidelines for naming coordination compounds based on IUPAC recommendations (2005) are as follows:

The cation is named first, followed by the anion regardless of weather the ion is simple or complex. For example

2. The simple ions are named as in other ionic compounds. For example,

3. To name a complex ion, the ligands are named first followed by the central metal atom/ion. When a complex ion contains more than one kind of ligands they are named in alphabetical order.

a. Naming the ligands:

i. The name of anionic ligands ends with the letter 'o' and the cationic ligand ends with 'ium'. The neutral ligands are usually called with their molecular names with fewer exceptions namely, H2O (aqua), CO (carbonyl), NH3 (ammine) and NO (nitrosyl). 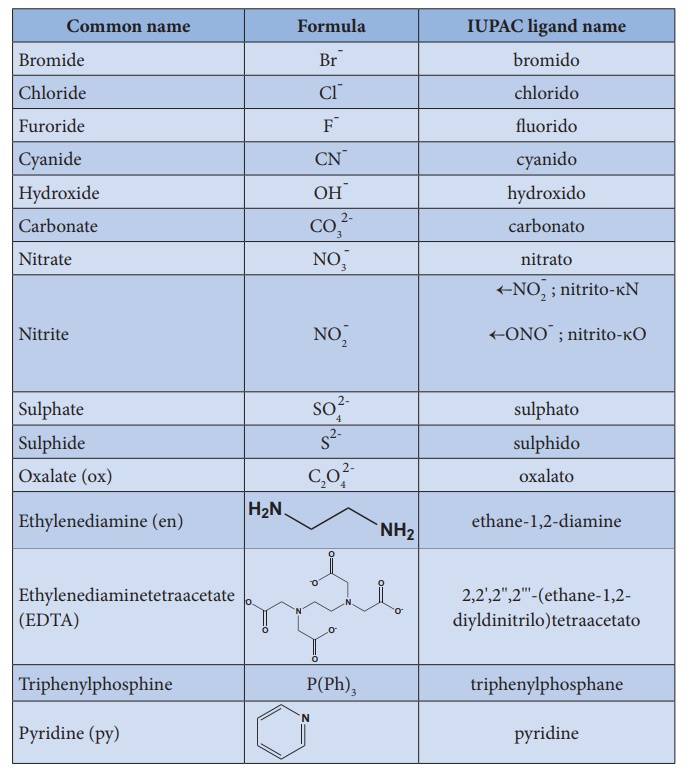 iii. If the coordination entity contains more than one ligand of a particular type, the multiples of ligand (2, 3, 4 etc...) is indicated by adding appropriate Greek prefixes (di, tri, tetra, etc...) to the name of the ligand. If the name of a ligand itself contains a Greek prefix (eg. ethylenediamine), use an alternate prefixes (bis, tris, tetrakis etc..) to specify the multiples of such ligands. These numerical prefixes are not taken into account for alphabetising the name of ligands.

b. Naming the central metal:

In cationic/neutral complexes, the element name is used as such for naming the central metal atom/ion, whereas, a suffix 'ate' is used along with the element name in anionic complexes. The oxidation state of the metal is written immediately after the metal name using roman numerals in parenthesis. 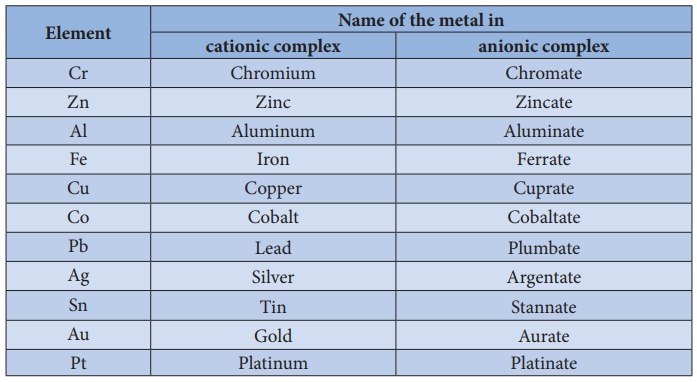 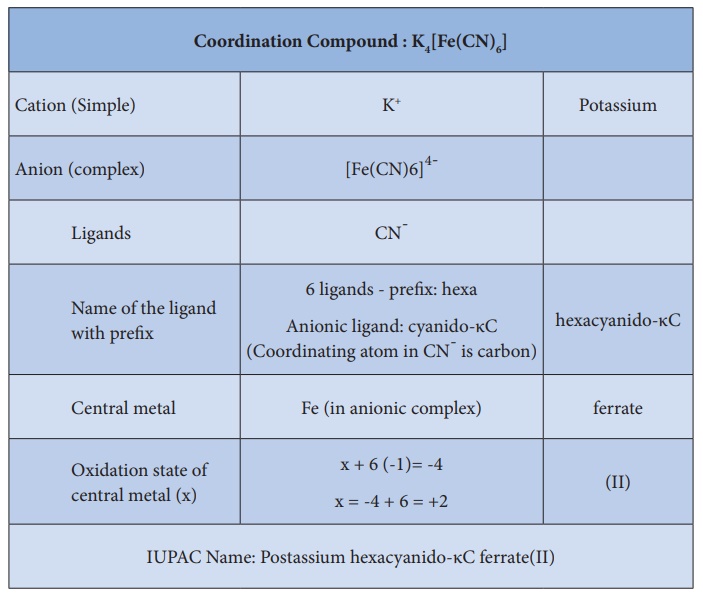 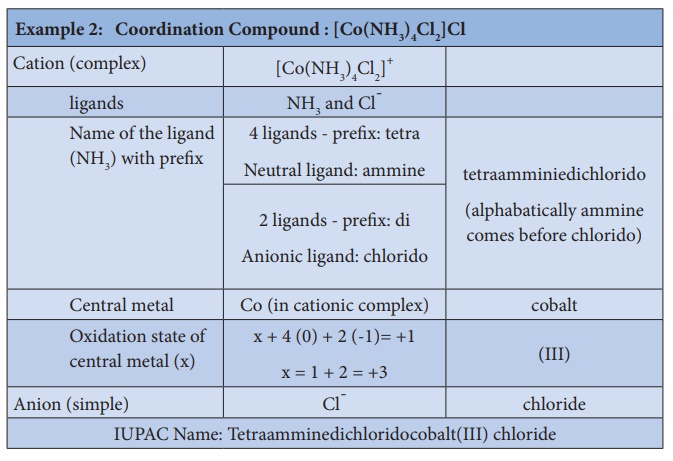 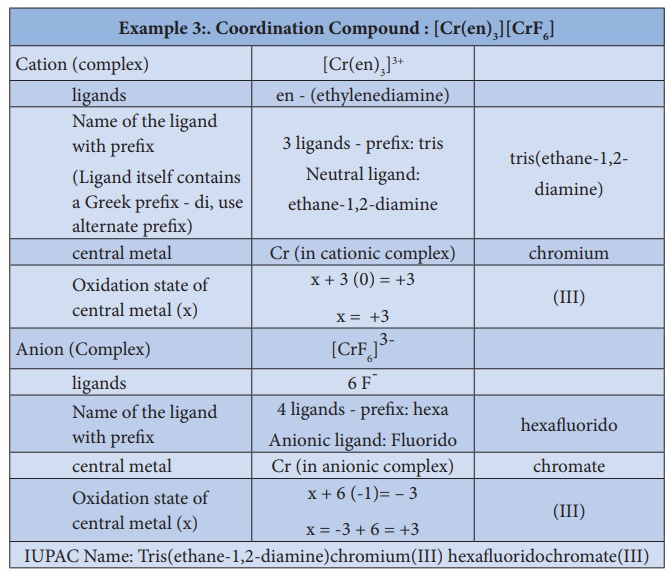 More examples with names are given in the list below for better understanding of IUPAC Nomenclature: 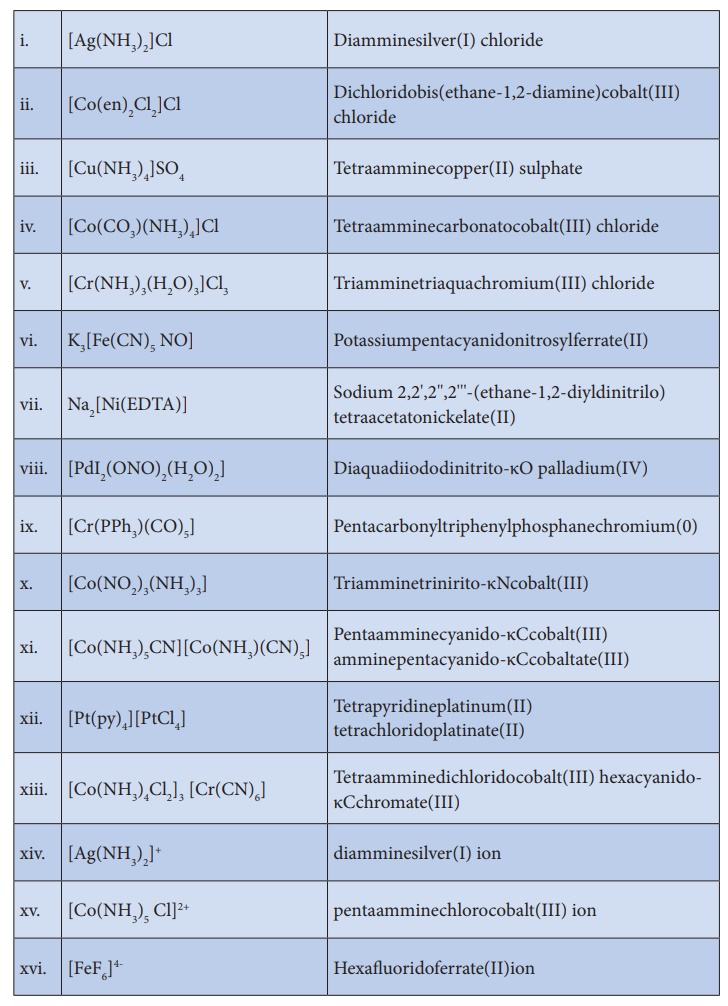