Myelinated and Unmyelinated Nerve Fibers. Figure 5–15shows a cross section of a typical small nerve, revealing many large nerve fibers that constitute most of the cross-sectional area.

Myelinated and Unmyelinated Nerve Fibers. Figure 5–15shows a cross section of a typical small nerve, revealing many large nerve fibers that constitute most of the cross-sectional area. However, a more careful look reveals many more very small fibers lying between the large ones. The large fibers are myelinated, and the small ones are unmyelinated. The average nerve trunk contains about twice as many unmyelinated fibers as myelinated fibers. 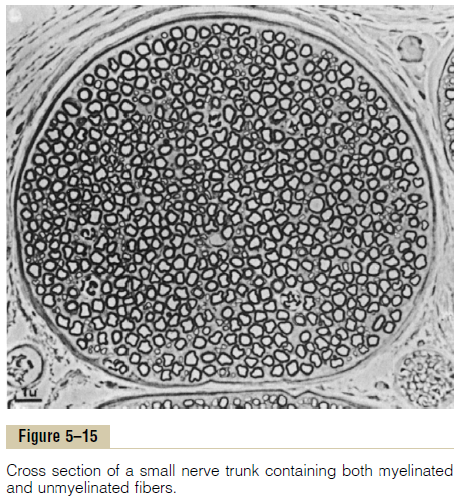 Figure 5–16 shows a typical myelinated fiber. The central core of the fiber is the axon, and the membrane of the axon is the membrane that actually conducts the action potential. The axon is filled in its center with axo-plasm, which is a viscid intracellularfluid. Surroundingthe axon is a myelin sheath that is often much thicker than the axon itself. About once every 1 to 3 milli-meters along the length of the myelin sheath is a nodeof Ranvier. 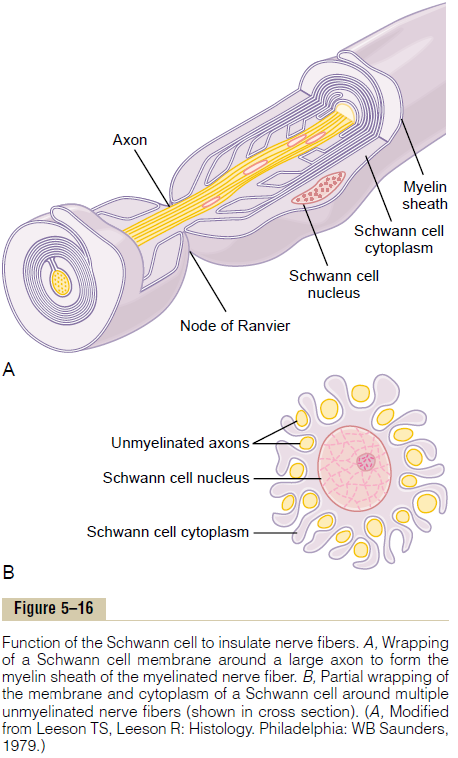 The myelin sheath is deposited around the axon by Schwann cells in the following manner: The membrane of a Schwann cell first envelops the axon. Then the Schwann cell rotates around the axon many times, laying down multiple layers of Schwann cell membrane containing the lipid substance sphingomyelin. This sub-stance is an excellent electrical insulator that decreases ion flow through the membrane about 5000-fold. At the juncture between each two successive Schwann cells along the axon, a small uninsulated area only 2 to 3 micrometers in length remains where ions still canflowwith ease through the axon membrane between the extracellular fluid and the intracellular fluid inside the axon. This area is called the node of Ranvier.

“Saltatory” Conduction in Myelinated Fibers from Node to Node.

Even though almost no ions can flow through the thick myelin sheaths of myelinated nerves, they can flow with ease through the nodes of Ranvier. Therefore, action potentials occur only at the nodes. Yet the action poten-tials are conducted from node to node, as shown in Figure 5–17; this is called saltatory conduction. That is, electrical current flows through the surrounding extra-cellular fluid outside the myelin sheath as well as through the axoplasm inside the axon from node to node, exciting successive nodes one after another. Thus, the nerve impulse jumps down the fiber, which is the origin of the term “saltatory.” 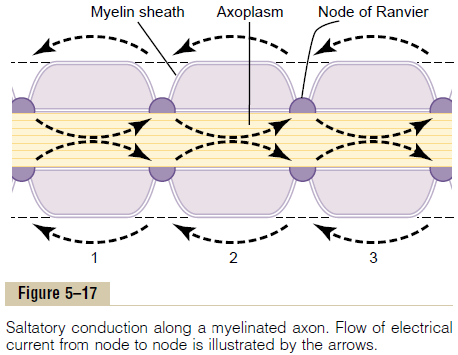 Saltatory conduction is of value for two reasons. First, by causing the depolarization process to jump long intervals along the axis of the nerve fiber, this mecha-nism increases the velocity of nerve transmission in myelinated fibers as much as 5- to 50-fold. Second, saltatory conduction conserves energy for the axon because only the nodes depolarize, allowing perhaps 100 times less loss of ions than would otherwise be nec-essary, and therefore requiring little metabolism for re-establishing the sodium and potassium concentration differences across the membrane after a series of nerve impulses.

Still another feature of saltatory conduction in large myelinated fibers is the following: The excellent insulation afforded by the myelin membrane and the 50-fold decrease in membrane capacitance allow repolar-ization to occur with very little transfer of ions.

Velocity of Conduction in Nerve Fibers. The velocity of con-duction in nerve fibers varies from as little as 0.25 m/sec in very small unmyelinated fibers to as great as 100 m/ sec (the length of a football field in 1 second) in very large myelinated fibers.