The resting membrane potential of large nerve fibers when not transmitting nerve signals is about –90 millivolts.

The resting membrane potential of large nerve fibers when not transmitting nerve signals is about –90 millivolts. That is, the potential inside thefiber is 90 millivolts more negative than the potential in the extra-cellular fluid on the outside of the fiber. In the next few paragraphs, we explain all the factors that determine the level of this resting potential, but before doing so, we must describe the transport properties of the resting nerve membrane for sodium and potassium. 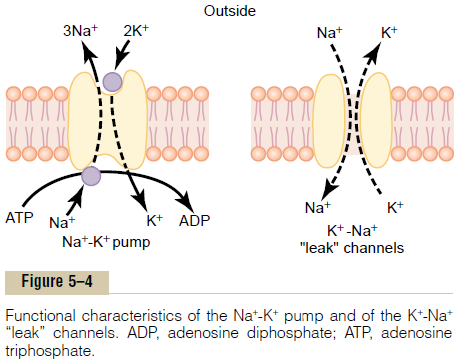 The Na+-K+ also causes large concentration gradi-ents for sodium and potassium across the resting nerve membrane. These gradients are the following:

Leakage of Potassium and Sodium Through the Nerve Mem- brane. The right side of Figure 5–4 shows a channelprotein in the nerve membrane through which potas-sium and sodium ions can leak, called a potassium-sodium (K+-Na+) “leak” channel. The emphasis is onpotassium leakage because, on average, the channels are far more permeable to potassium than to sodium, normally about 100 times as permeable. As discussed later, this differential in permeability is exceedingly important in determining the level of the normal resting membrane potential.

Figure 5–5 shows the important factors in the estab-lishment of the normal resting membrane potential of–90 millivolts. They are as follows.

Contribution of the Potassium Diffusion Potential. In Figure5–5A, we make the assumption that the only move-ment of ions through the membrane is diffusion of potassium ions, as demonstrated by the open channels between the potassium symbols (K+) inside and outside the membrane. Because of the high ratio of potassium ions inside to outside, 35:1, the Nernst

Contribution of Sodium Diffusion Through the Nerve Membrane.

Contribution of the Na+-K+ Pump. In Figure 5–5C, theNa+-K+ pump is shown to provide an additional con-tribution to the resting potential. In this figure, there is continuous pumping of three sodium ions to the outside for each two potassium ions pumped to the inside of the membrane. The fact that more sodium ions are being pumped to the outside than potassium to the inside causes continual loss of positive charges from inside the membrane; this creates an additional degree of negativity (about –4 millivolts additional) on the inside beyond that which can be accounted for by diffusion alone. Therefore, as shown in Figure 5–5C, the net membrane potential with all these factors operative at the same time is about –90 millivolts.