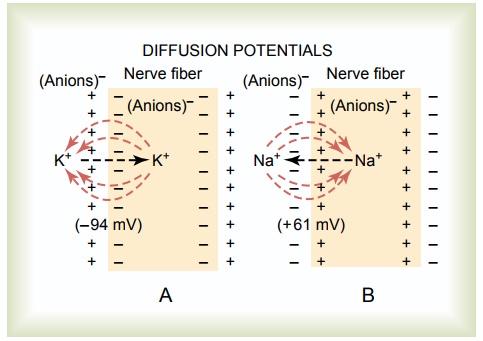 “Diffusion Potential” Caused by an Ion Concentration Difference on the Two Sides of the Membrane.

“Diffusion Potential” Caused by an Ion Concentration Difference on the Two Sides of the Membrane. In Figure 5–1A,the potassium concentration is greatinsidea nervefiber membrane but very low outside the membrane. Let us assume that the membrane in this instance is permeable to the potassium ions but not to any other ions. Because of the large potassium concentration gradient from inside toward outside, there is a strong tendency for extra numbers of potassium ions to diffuse outward through the membrane. As they do so, they carry positive electrical charges to the outside, thus creating electropositivity outside the membrane and electronegativity inside because of negative anions that remain behind and do not diffuse outward with the potassium. Within a millisecond or so, the potential difference between the inside and outside, called the diffusionpotential, becomes great enough to block further net potassium diffusion to theexterior, despite the high potassium ion concentration gradient. In the normal mammalian nerve fiber, the potential difference required is about 94 millivolts,with negativity inside the fiber membrane. 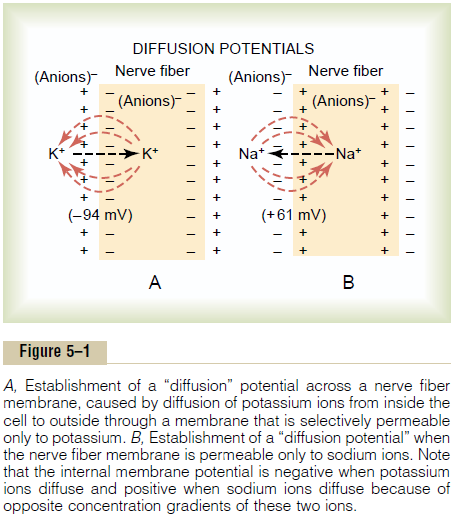 Figure 5–1B shows the same phenomenon as in Figure 5–1A, but this time with high concentration of sodium ions outside the membrane and low sodium inside. These ions are also positively charged. This time, the membrane is highlypermeable to the sodium ions but impermeable to all other ions. Diffusion of the positively charged sodium ions to the inside creates a membrane potential of opposite polarity to that in Figure 5–1A, with negativity outside and positiv-ity inside. Again, the membrane potential rises high enough within milliseconds to block further net diffusion of sodium ions to the inside; however, this time, in the mammalian nerve fiber, the potential is about 61 millivolts positive insidethe fiber.

Thus, in both parts of Figure 5–1, we see that a concentration difference of ions across a selectively permeable membrane can, under appropriate condi-tions, create a membrane potential. In later sections, we show that many of the rapid changes in membrane potentials observed during nerve and muscle impulse transmission result from the occurrence of such rapidly changing diffusion potentials.

where EMF is electromotive force.

When a membrane is permeable to several different ions, the diffusion potential that develops depends on three factors: (1) the polarity of the electrical charge of each ion, (2) the permeability of the membrane (P) to each ion, and (3) the concentrations (C) of the respective ions on the inside (i) and outside (o) of the membrane. Thus, the following formula, called the  Goldman equation, or the Goldman-Hodgkin-Katz equation, gives the calculated membrane potential onthe inside of the membrane when two univalent posi-tive ions, sodium (Na+) and potassium (K+), and one univalent negative ion, chloride (Cl–), are involved.

Let us study the importance and the meaning of this equation. First, sodium, potassium, and chloride ions are the most important ions involved in the develop-ment of membrane potentials in nerve and muscle fibers, as well as in the neuronal cells in the nervous system. The concentration gradient of each of these ions across the membrane helps determine the voltage of the membrane potential.

Second, the degree of importance of each of the ions in determining the voltage is proportional to the mem-brane permeability for that particular ion. That is, if the membrane has zero permeability to both potassium and chloride ions, the membrane potential becomes entirely dominated by the concentration gradient of sodium ions alone, and the resulting potential will be equal to the Nernst potential for sodium. The same holds for each of the other two ions if the membrane should become selectively permeable for either one of them alone.