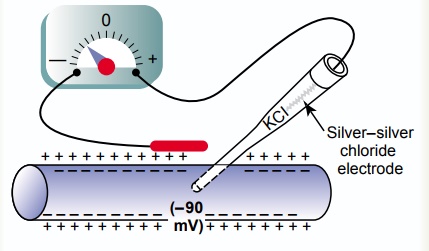 The method for measuring the membrane potential is simple in theory but often difficult in practice because of the small size of most of the fibers.

The method for measuring the membrane potential is simple in theory but often difficult in practice because of the small size of most of the fibers. 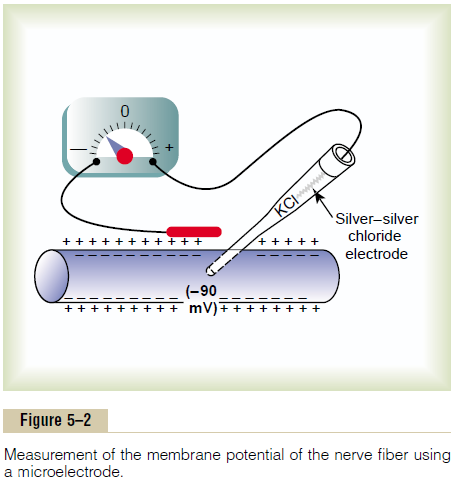 Figure 5–2 shows a small pipette filled with an electrolyte solution. The pipette is impaled through the cell membrane to the interior of the fiber. Then another electrode, called the “indifferent electrode,” is placed in the extracellular fluid, and the potential difference between the inside and outside of the fiber is measured using an appropri-ate voltmeter. This voltmeter is a highly sophisticated electronic apparatus that is capable of measuring very small voltages despite extremely high resistance to elec-trical flow through the tip of the micropipette, which has a lumen diameter usually less than 1 micrometer and a resistance more than a million ohms. For record-ing rapid changes in the membrane potential during transmission of nerve impulses, the microelectrode is connected to an oscilloscope.

The lower part of Figure 5–3 shows the electrical potential that is measured at each point in or near the nerve fiber membrane, beginning at the left side of the figure and passing to the right. As long as the electrode is outside the nerve membrane, the recorded potential is zero, which is the potential of the extracellular fluid. Then, as the recording electrode passes through the voltage change area at the cell membrane (called the electrical dipole layer), the potential decreases abruptlyto –90 millivolts. Moving across the center of the fiber, the potential remains at a steady –90-millivolt level but reverses back to zero the instant it passes through the membrane on the opposite side of the fiber. 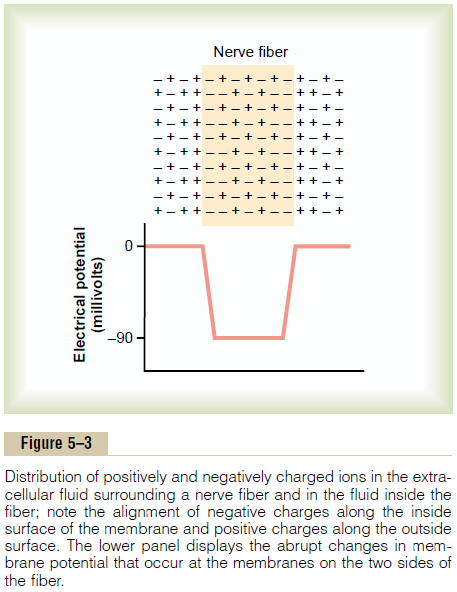 To create a negative potential inside the membrane, only enough positive ions to develop the electrical dipole layer at the membrane itself must be transported outward. All the remaining ions inside the nerve fiber can be both positive and negative, as shown in the upper panel of Figure 5–3. Therefore, an incredibly small number of ions needs to be transferred through the membrane to establish the normal “resting potential” of –90 millivolts inside the nerve fiber; this means that only about 1/3,000,000 to 1/100,000,000 of the total positive charges inside the fiber needs to be transferred. Also, an  equally small number of positive ions moving from outside to inside the fiber can reverse the potential from –90 millivolts to as much as +35 millivolts within as little as 1/10,000 of a second.