Rhythmicity of Some Excitable Tissues-Repetitive Discharge

Repetitive self-induced discharges occur normally in the heart, in most smooth muscle, and in many of the neurons of the central nervous system.

RHYTHMICITY OF SOME EXCITABLE TISSUES—REPETITIVE DISCHARGE

Repetitive self-induced discharges occur normally in the heart, in most smooth muscle, and in many of the neurons of the central nervous system. These rhyth-mical discharges cause (1) the rhythmical beat of the heart, (2) rhythmical peristalsis of the intestines, and (3) such neuronal events as the rhythmical control of breathing.

Also, almost all other excitable tissues can discharge repetitively if the threshold for stimulation of the tissue cells is reduced low enough. For instance, even large nerve fibers and skeletal muscle fibers, which normally are highly stable, discharge repetitively when they are placed in a solution that contains the drug veratrine or when the calcium ion concentration falls below a critical value, both of which increase sodium permeability of the membrane. 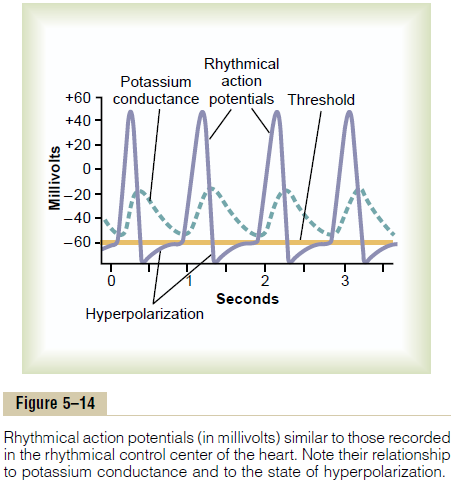 For spontaneous rhythmicity to occur, the membrane even in its natural state must be permeable enough to sodium ions (or to calcium and sodium ions through the slow calcium-sodium channels) to allow automatic membrane depolarization. Thus, Figure 5–14 shows that the “resting” membrane potential in the rhythmi-cal control center of the heart is only –60 to –70 milli-volts. This is not enough negative voltage to keep the sodium and calcium channels totally closed. Therefore, the following sequence occurs: (1) some sodium and calcium ions flow inward; (2) this increases the mem-brane voltage in the positive direction, which further increases membrane permeability; (3) still more ions flow inward; and (4) the permeability increases more, and so on, until an action potential is generated. Then, at the end of the action potential, the membrane re-polarizes. After another delay of milliseconds or seconds, spontaneous excitability causes depolariza-tion again, and a new action potential occurs sponta-neously. This cycle continues over and over and causes self-induced rhythmical excitation of the excitable tissue.

Why does the membrane of the heart control center not depolarize immediately after it has become re-polarized, rather than delaying for nearly a second before the onset of the next action potential? The answer can be found by observing the curve labeled “potassium conductance” in Figure 5–14. This shows that toward the end of each action potential, and con-tinuing for a short period thereafter, the membrane becomes excessively permeable to potassium ions. The excessive outflow of potassium ions carries tremen-dous numbers of positive charges to the outside of the membrane, leaving inside the fiber considerably more negativity than would otherwise occur.

This continues for nearly a second after the preceding action poten-tial is over, thus drawing the membrane potential nearer to the potassium Nernst potential. This is a state called hyperpolarization, also shown in Figure 5–14. As long as this state exists, self–re-excitation will not occur. But the excess potassium conductance (and the state of hyperpolarization) gradually disappears, as shown after each action potential is completed in the figure, thereby allowing the membrane potential again to increase up to the threshold for excitation. Then, suddenly, a new action potential results, and the process occurs again and again.