Nerve signals are transmitted by action potentials, which are rapid changes in the membrane potential that spread rapidly along the nerve fiber membrane.

The upper panel of Figure 5–6 shows the changes that occur at the membrane during the action poten-tial, with transfer of positive charges to the interior of the fiber at its onset and return of positive charges to the exterior at its end. The lower panel shows graphi-cally the successive changes in membrane potential over a few 10,000ths of a second, illustrating the explosive onset of the action potential and the almost equally rapid recovery. 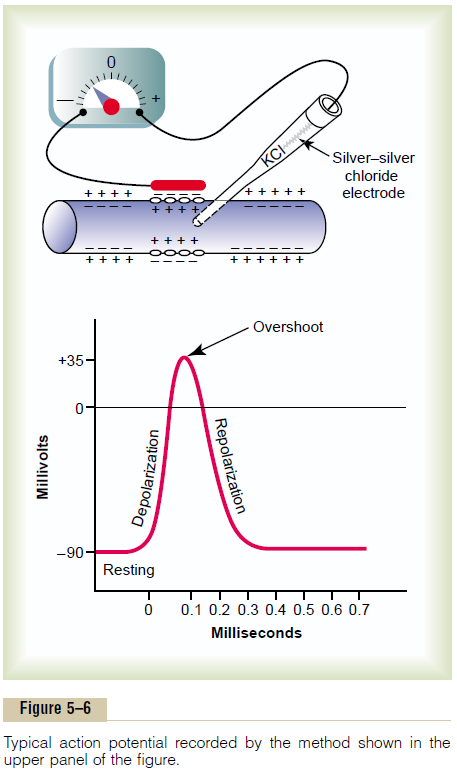 The successive stages of the action potential are as follows.

Depolarization Stage. At this time, the membrane sud-denly becomes very permeable to sodium ions, allow-ing tremendous numbers of positively charged sodium ions to diffuse to the interior of the axon. The normal “polarized” state of –90 millivolts is immediately neu-tralized by the inflowing positively charged sodium ions, with the potential rising rapidly in the positive direction. This is called depolarization. In large nerve fibers, the great excess of positive sodium ions moving to the inside causes the membrane potential to actu-ally “overshoot” beyond the zero level and to become somewhat positive. In some smaller fibers, as well as in many central nervous system neurons, the potential merely approaches the zero level and does not over-shoot to the positive state.

Repolarization Stage. Within a few 10,000ths of a secondafter the membrane becomes highly permeable to sodium ions, the sodium channels begin to close and the potassium channels open more than normal. Then, rapid diffusion of potassium ions to the exterior re-establishes the normal negative resting mem-brane potential. This is called repolarization of the membrane.

To explain more fully the factors that cause both depolarization and repolarization, we need to describe the special characteristics of two other types of trans-port channels through the nerve membrane: the voltage-gated sodium and potassium channels.

Voltage-Gated Sodium Channel—Activation and Inactivation of the Channel

The upper panel of Figure 5–7 shows the voltage-gated sodium channel in three separate states. This channel has two gates—one near the outside of the channel called the activation gate, and another near the inside called the inactivation gate. The upper left of the figure depicts the state of these two gates in the normal resting membrane when the membrane potential is –90 millivolts. In this state, the activation gate is closed, which prevents any entry of sodium ions to the inte-rior of the fiber through these sodium channels. 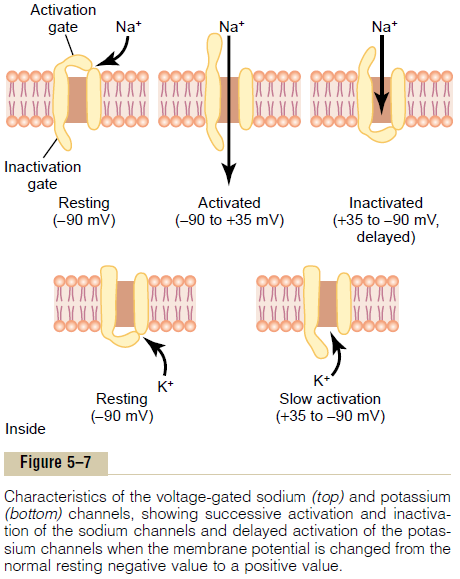 Activation of the Sodium Channel. When the membranepotential becomes less negative than during the resting state, rising from –90 millivolts toward zero, it finally reaches a voltage—usually somewhere between –70 and –50 millivolts—that causes a sudden confor-mational change in the activation gate, flipping it all the way to the open position. This is called the acti-vated state; during this state, sodium ions can pourinward through the channel, increasing the sodium permeability of the membrane as much as 500- to 5000-fold.

That is, the conformational change that flips the inactivation gate to the closed state is a slower process than the con-formational change that opens the activation gate. Therefore, after the sodium channel has remained open for a few 10,000ths of a second, the inactivation gate closes, and sodium ions no longer can pour to the inside of the membrane. At this point, the membrane potential begins to recover back toward the resting membrane state, which is the repolarization process.

Voltage-Gated Potassium Channel and Its Activation

The lower panel of Figure 5–7 shows the voltage-gated potassium channel in two states: during the resting state (left) and toward the end of the action potential (right). During the resting state, the gate of the potas-sium channel is closed, and potassium ions are pre-vented from passing through this channel to the exterior. When the membrane potential rises from –90 millivolts toward zero, this voltage change causes a conformational opening of the gate and allows increased potassium diffusion outward through the channel. However, because of the slight delay in opening of the potassium channels, for the most part, they open just at the same time that the sodium chan-nels are beginning to close because of inactivation. Thus, the decrease in sodium entry to the cell and the simultaneous increase in potassium exit from the cell combine to speed the repolarization process, leading to full recovery of the resting membrane potential within another few 10,000ths of a second.

Research Method for Measuring the Effect of Voltage on Opening and Closing of the Voltage-Gated Channels—The “VoltageClamp.”

The original research that led to quantitativeunderstanding of the sodium and potassium channels was so ingenious that it led to Nobel Prizes for the sci-entists responsible, Hodgkin and Huxley. The essence of these studies is shown in Figures 5–8 and 5–9. 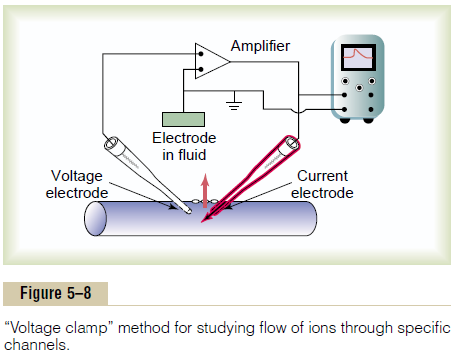 Figure 5–8 shows an experimental apparatus called a voltage clamp, which is used to measureflow of ionsthrough the different channels. In using this apparatus, two electrodes are inserted into the nerve fiber. One of these is to measure the voltage of the membrane poten-tial, and the other is to conduct electrical current into or out of the nerve fiber. This apparatus is used in the following way: The investigator decides which voltage he or she wants to establish inside the nerve fiber. The electronic portion of the apparatus is then adjusted to the desired voltage, and this automatically injects either positive or negative electricity through the current elec-trode at whatever rate is required to hold the voltage, as measured by the voltage electrode, at the level set by the operator. When the membrane potential is suddenly increased by this voltage clamp from –90 millivolts to zero, the voltage-gated sodium and potassium channels open, and sodium and potassium ions begin to pour through the channels. To counterbalance the effect of these ion movements on the desired setting of the intra-cellular voltage, electrical current is injected automati-cally through the current electrode of the voltage clamp to maintain the intracellular voltage at the required steady zero level. To achieve this, the current injected must be equal to but of opposite polarity to the net current flow through the membrane channels. To measure how much current flow is occurring at each instant, the current electrode is connected to an oscillo-scope that records the current flow, as demonstrated on the screen of the oscilloscope in Figure 5–8. Finally, the investigator adjusts the concentrations of the ions to other than normal levels both inside and outside the nerve fiber and repeats the study. This can be done easily when using large nerve fibers removed from some crustaceans, especially the giant squid axon, which in some cases is as large as 1 millimeter in diameter. When sodium is the only permeant ion in the solutions inside and outside the squid axon, the voltage clamp measures current flow only through the sodium channels. When potassium is the only permeant ion, current flow only through the potassium channels is measured. 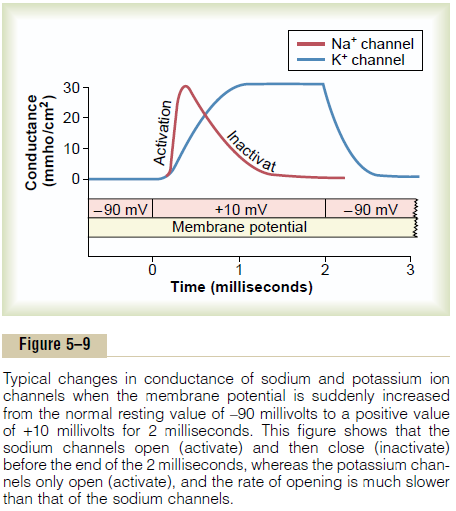 Another means for studying the flow of ions through an individual type of channel is to block one type of channel at a time. For instance, the sodium channels can be blocked by a toxin called tetrodotoxin by applying it to the outside of the cell membrane where the sodium activation gates are located. Conversely, tetraethylam-monium ion blocks the potassium channels when it isapplied to the interior of the nerve fiber.

Figure 5–9 shows typical changes in conductance of the voltage-gated sodium and potassium channels when the membrane potential is suddenly changed by use of the voltage clamp from –90 millivolts to +10 millivolts and then, 2 milliseconds later, back to –90 millivolts. Note the sudden opening of the sodium channels (the activation stage) within a small fraction of a millisecond after the membrane potential is increased to the posi-tive value. However, during the next millisecond or so, the sodium channels automatically close (the inactiva-tion stage).

Note the opening (activation) of the potassium chan-nels. These open slowly and reach their full open state only after the sodium channels have almost completely closed. Further, once the potassium channels open, they remain open for the entire duration of the positive membrane potential and do not close again until after the membrane potential is decreased back to a negative value.

Summary of the Events That Cause the Action Potential 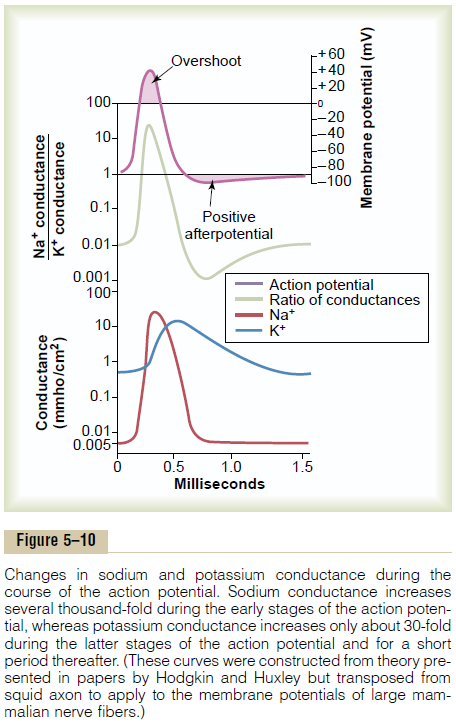