Sonogram Recording of movement of Heart: Principle and working

Principle: It works under the principle of Doppler Effect i.e., there is an apparent change in the frequency between the incident sound waves on the fetus and the reflected sound waves from the fetus.

Sonogram Recording of movement of Heart

It works under the principle of Doppler Effect i.e., there is an apparent change in the frequency between the incident sound waves on the fetus and the reflected sound waves from the fetus.

It consists of a Radio Frequency Oscillator(RFO), for producing 2 MHz of frequency and RFA (Radio Frequency Amplifier) to amplify the receiver signal as shown in the figure. 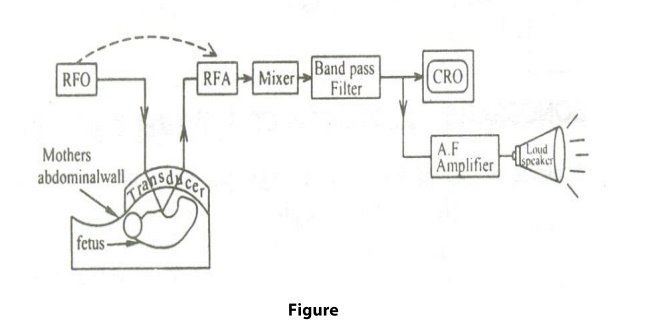 The reflected Ultrasonic waves from the etch are received by the transducer and are amplified by RFA. Both the incident and the received signals are mixed by the mixer and is filtered to distinguish the various types of sound and finally the Doppler shift or change in frequency is measured. The movement o the heart can be viewed visually by CRO or can be heard by the Loud Speaker, after necessary amplification by AF.

During the scanning of the body surface by Ultrasonic transducer, the Ultrasonic waves are transmitted into the patient’s body.

The echoes from the body are collected by the receiver circuit.

Since some echoes come from the depth, they are weak; therefore, proper depth gain compensation is given by DGC circuit.

Then these signals are converted into digital signals by an analog to digital converter and are stored in the memory of the Control Processing Unit (CPU) o a computer.

Meanwhile, the control unit in the CPU receives the signals of transducer position and TV synchronous pulses. These signals generates X plate and Y plate address information’s or the T.V monitor and is also stored in the memory of the CPU.

The stored signals are processed and colour coded and is given to the digital to analog(D/A converter), which converts the digital into analog signal.

Finally the mixing circuit mixes the analog signals and TV synchronous signals properly. The mixed signals are finally fed to the video section of the television monitor as shown in the igure 1.12.

The TV monitor produces the coloured Ultrasonic image of the internal part o the Body.