Some principles of cancer pharmacotherapy

Some principles of cancer pharmacotherapy

•     While in most cases the aim of pharmacotherapy is to modulate cell function, in cancer therapy it is to kill the diseased cells – no prisoners. Selective killing is quite feasible with bacteria, since they are prokaryotic, and their biochemical apparatus contains a substantial num-ber of targets that do not occur in human cells1. It is more challenging yet possible with fungi and parasites. The latter share with our own cells the eukaryotic nature, and so inhibitors of ribosomal protein synthesis, which are very important in antibacterial chemotherapy, are most-ly useless. However, fungi have ergosterol in their cell membranes instead of cholesterol, and both ergosterol and its synthesis are targeted by drugs that thus can be reasonably selective2. In contrast, since tumour cells are derived from normal body cells, they do not normally possess any particular drug target that sets them apart from the healthy cells.

•     Cancers are diverse – they may be derived from near-ly any organ, and there are several types of cancers for each organ. This diversity brings with it an inherent variability in the susceptibility to chemotherapy. Some cancers are susceptible to many cytotoxic agents and can be cured quite efficiently; an example is lymphatic leukemia, especially in childhood that nowadays has a cure rate of approximately 90%. Others – e.g., squamous lung cancer – are virtually intractable if not by surgery. In many cases, the susceptibility cannot be predicted ac-curately beforehand. However, with an increasing num-ber of tumours (particularly leukemias), genetic analysis is being used for exact typing, which helps in the selec-tion of appropriate treatment regimens. 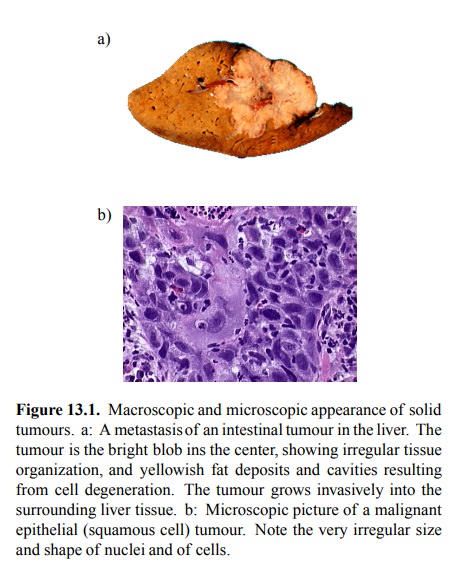 ·   Cancers, even if typically derived from one individual transformed cell, are heterogeneous – due to their in-herent genetic instability. Normal body cells are `good citizens' and obey the commandments enshrined in the genome; the same set of enzymes and receptors (i.e., drug targets), with the same regulation and expression levels, can be expected to occur in any cell of a given type. In contrast, tumours at advanced stages usually de-velop multiple clones with varying chromosomal dele-tions, duplications and translocations that can profound-ly change the prevalence of drug targets and the function of regulatory mechanisms. E.g., breast tumours that ini-tially are susceptible to hormone withdrawal (or compet-itive hormone antagonists) frequently give rise to clones that grow without the hormones; tumours that initially are inhibited by anti-metabolites may develop resistance by changing expression levels of the enzymes involved. 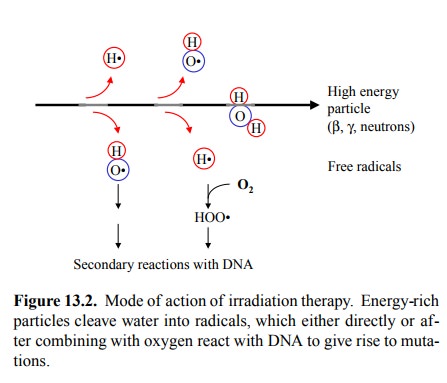 Although we are concerned here with chemotherapy only, it is worth noting that irradiation therapy also has a chem-ical mode of action (Figure 13.2): Energy-rich particles (photons in X- and γ-irradiation, electrons or neutrons in particle irradiation) dispose of their energy in multiple suc-cessive events, giving rise to multiple radicals (mostly de-rived from water) along their path. These, in turn, may di rectly react with macromolecules, or they may react with oxygen to form superoxide radicals, which have a longer lifetime and thus are more likely to find biologically signifi-cant targets (mostly DNA) by diffusion. Oxygen therefore sensitizes cells to radiation, while radical-capturing and re-ducing compounds (e.g, free thiols) will reduce sensitivity. Radio-sensitizing and -protecting drugs for use in conjunc-tion with radiation have been investigated but not found widespread clinical application.