Another class of DNA-damaging drugs are found in nature as antibiotics.

Another class of DNA-damaging drugs are found in nature as antibiotics. Antibiotics are widely used by compet-ing soil microorganisms, both prokaryotic and eukaryotic. While many of them are selectively toxic for prokaryotic cells and therefore of use in antibacterial therapy, an even larger number is toxic for both prokaryotes and eukaryotes, often with higher toxicity for the latter. Several of these an-tibiotics have been useful in biochemical research because they can be used to dissect various stages of gene expres-sion and protein maturation.

The antibiotics used in cancer chemotherapy are most-ly DNA-intercalating agents. An example is provided by daunorubicin (Figure 13.10). This drug molecule has a large, flat polycyclic system, which will intercalate between the stacked base pairs of the DNA. However, there is more to it: The ring is also able to chelate iron, and the complex catalyses the formation of superoxide anions at the expense of glutathione (Figure 13.10b). The highly reactive super-oxide can wreak all kinds of havoc on the DNA in its im-mediate vicinity, including strand breakages10. Another ef-fect is the formation of covalent adducts between the amino group at the sugar moiety and guanine residues in the DNA. In the chapter on drug metabolism, we already saw some-thing similar: The intercalating agent benzpyrene also re-quired covalent reactivity for significant DNA damage to occur, which in that case was brought about by metabolic activation to the epoxide. 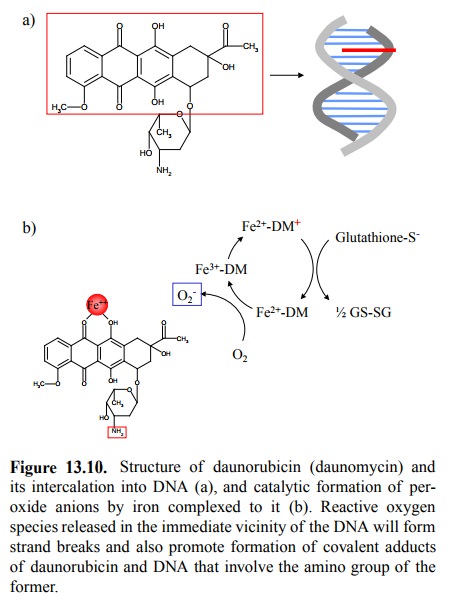