Inhibition of mitosis is caused by drugs that interfere with the polymerization of tubulin.

Inhibition of mitosis is caused by drugs that interfere with the polymerization of tubulin. The polymers of tubulin consist of α,β dimers, assembled in a helical fashion into a hollow fiber. These tubules are dynamically being formed and destroyed as needed by the cell; polymerization is GTP dependent. They are important in molecular transport and motion; broadly speaking, tubulin is to dynein what actin is to myosin. However, tubulin-dynein participates in other processes of molecular motion than actin/myosin, includ-ing the segregation of the chromosomes in mitosis. The mitotic spindle is the tubulin framework assembled for this purpose (Figure 13.15a). Formation of the spindle is inhib-ited by vincristine (Figure 13.15b). This drug molecule has a very nice complex structure, but I have not found any in-formation on how it actually fits to the target protein (tubu-lin). In any event, binding of vincristine still permits the tubulin dimer to associate with the nascent tubule; howev er, it then inhibits the addition of further subunits. Also, it stays rather firmly in place, so that the tubule in effect be-comes `capped' and trapped (Figure 13.15c). Monomeric tubulin becoming saturated with vincristine will also poly-merize into atypical shapes; this, however, seems to be lim-ited to high drug concentrations and not to occur in vivo. Of note, another drug with virtually the same mechanism of action is colchicine, which however is used in the treat-ment of gout rather than cancer. I have not seen any ratio-nal argument for the preferment of either drug in their re-spective applications. 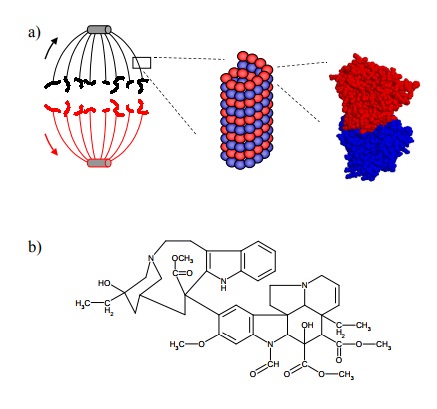 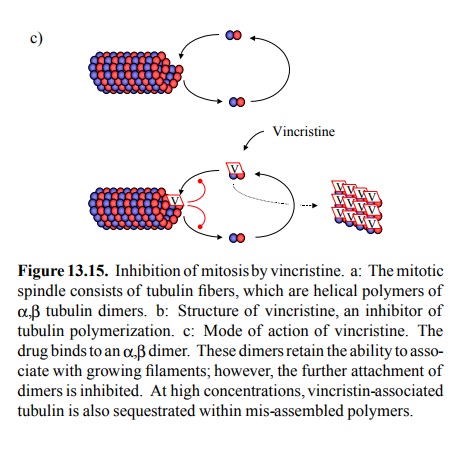 Finally, after learning about the modes of action of all these rat poisons, there remains one nagging question: Why is it that they possess any useful degree of selectivity for can-cer cells as opposed to healthy body cells at all? Sure, the side effects of cytotoxic cancer therapy are considerable, most prominently (and unsurprisingly) affecting the most rapidly proliferating tissues such as bone marrow and in-testinal mucous membranes. Still, in many cases condi-tions can be found in which the tumour suffers a much more pronounced setback than the normal tissues. Several types of tumours, including childhood leukemias and testi-cle tumours, are nowadays being cured by chemotherapy in the majority of cases, without severe long-term damage to the rest of the organism (remember Lance Armstrong?)13. While a high proliferation rate is certainly an important determinant of sensitivity to cytotoxic agents, it is worth pointing out that the mitotic rates of most tumours do not come close to the regeneration rates of the healthy bone marrow – a human being generates a whopping 600 kg of erythrocytes and leukocytes each during a lifetime!