The other major group of enzymes that are involved in the synthesis of eicosanoid mediators are the lipoxygenases.

The other major group of enzymes that are involved in the synthesis of eicosanoid mediators are the lipoxygenases. There are three different such enzyme specificities – 5-, 12-, and 15-lipoxygenase, which introduce a hydroperoxy group at the respective carbons of arachidonic acid. Reduc-tion of these hydroperoxides (HPETEs) leads to hydrox-yl derivatives (HETEs). These apparently are mediators in their own rights, but they can also be further converted to lipoxins by the successive action of different lipoxygenas-es, as illustrated in Figure 12.12b for 15- and 5-lipoxyge-nase. Lipoxins seem to have anti-inflammatory activity.

While the reactive groups in the active sites of cyclooxyge-nases and lipoxygenase are quite different, their catalyticmechanisms are actually similar in that both start out with the abstraction of a hydrogen from the fatty acid and the subsequent combination with an oxygen radical (cf. Fig-ures 12.6 and 12.12). Interestingly, while Cox-1 is com-pletely inactivated by acetylsalicylic acid, acetylated Cox-2 is still able to catalyze the above initial steps and thus function as a lipoxygenase, giving rise to the formation of stereoisomers of physiological HETEs and lipoxins. It has been proposed that these may contribute to the therapeutic effect of acetylsalicylic acid. 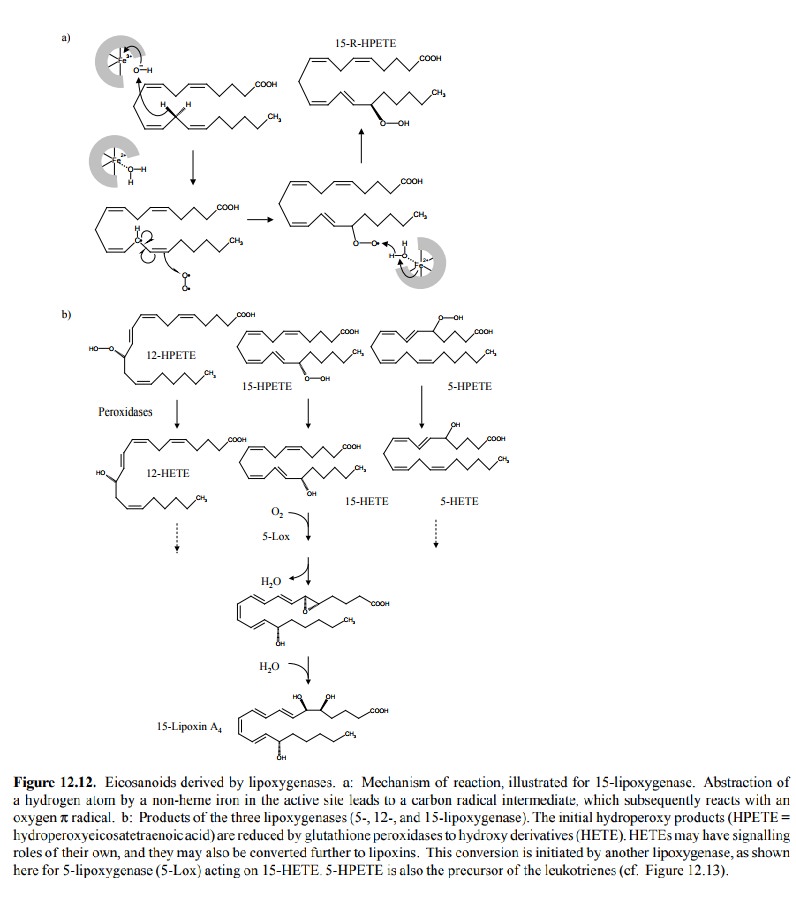 For 5-HPETE, however, there is another important route, which leads to leukotriene A4 and from there to either leukotriene B4 or, by reaction with glutathione and subse-quent cleavage of peptide bonds, to leukotrienes C4, D4 and E4 (Figure 12.13). Leukotrienes (LTD4, in particular) are potent mediators in asthma, arthritis and other chronic aller-gies and inflammatory diseases. Inhibitors of both lipoxy-genase 5 and of leukotriene receptors are available and be-ing successfully used in clinical therapy (Figure 12.14). 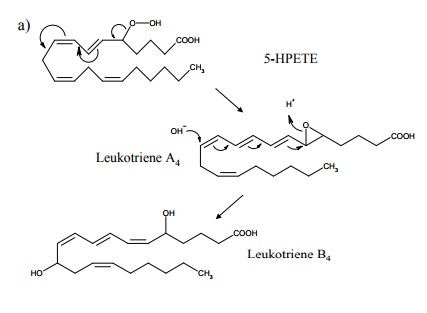 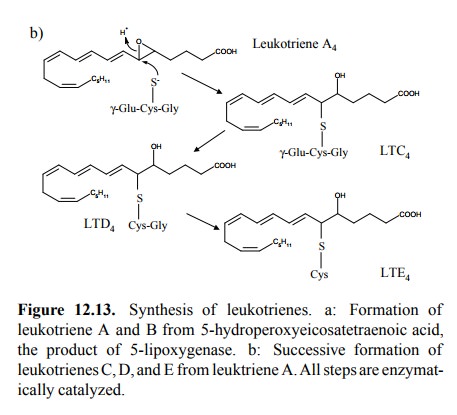 Since lipoxygenases and cyclooxygenases share the same pool of arachidonic acid, one might expect an undesirable increase in the synthesis of leukotrienes upon inhibition of cyclooxygenase (Figure 12.15a). Indeed, it has long been known that patients suffering from asthma may experi-ence clinical deterioration upon use of acetylsalicylic acid, which is in line with a prominent role of leukotrienes as me-diators in this disease. Selective inhibition of Cox-2 should be less freighted with this type of interaction. Moreover, there are inhibitors (still somewhat experimental at present; Figure 12.15b) that inhibit both 5-Lox and Cox-2 but not Cox-1 – a remarkable feat of drug development, given that Cox-1 and Cox-2 are more closely homologous to each oth-er than to lipoxygenase. The complementary effect – in-creased formation of prostaglandin E and thromboxanes upon application of lipoxygenase inhibitors – has been sub-stantiated by laboratory findings, but I am not aware of ev-idence that this has a clinical impact. 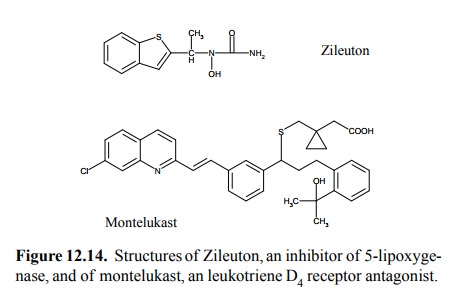 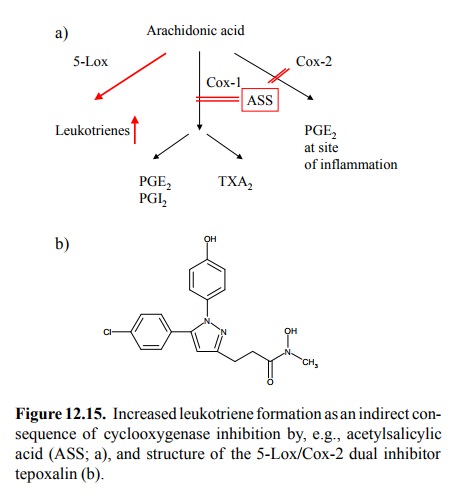 Aside from sophisticated drug design, there is a surprising-ly simple means of favourably influencing the balance of Good and Evil in eicosanoid metabolism: Eating fish. As initially mentioned, aside from arachidonic acid, other mul-tiply non-saturated fatty acids can serve as precursors of eicosanoid mediators as well, in particular eicosapentanoic acid (EPA), which has an additional double bond between C17 and C18. The introduction of this `omega-3' double bond7 does not occur, nor is it reversible, in mammalian metabolism (Figure 12.16a). It does, however, occur in plants, where it contributes to the adjustment of membrane fluidity in cold environments. Accordingly, we find high concentrations of EPA in algae from cold water, and from the animals (fish) feeding on them. A high intake of this type of food will lead to a partial replacement of arachidon-ic acid in our own cell membranes by EPA, and therefore to an increased fraction of EPA derivatives in our eicosanoids (Figure 12.16b). Some of the EPA derived mediators are as active as those derived from arachidonic acid. However, it appears that this does not apply to thromboxane (TXA3) and leukotrienes (LTD5 and similar). Since these are the major culprits among the eicosanoids in sustaining inflammation and triggering thrombocyte aggregation, the result of a diet rich in fish and seaweed should be a reduction in inflam-mation and thrombocyte aggregation, a longer life, grumpy heirs, and impoverished physicians. 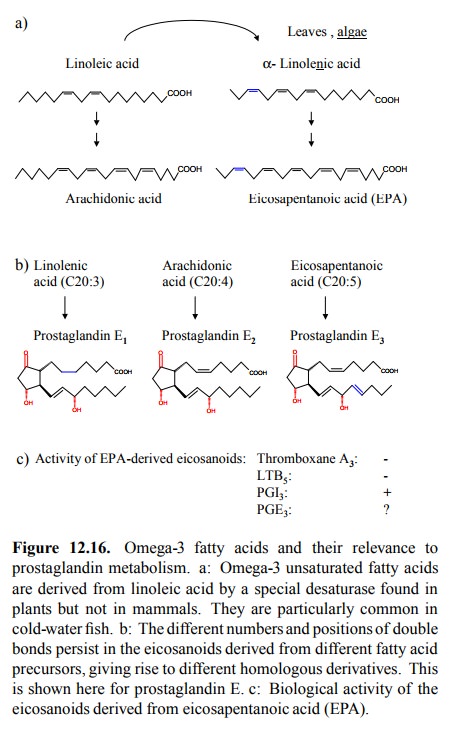 Now, does this work? There are some intriguing statis-tics to support this: While in western countries 40% of all deaths are due to atherosclerosis (in which both inflamma-tion and thrombocyte aggregation are important), this num-ber stands at 7% among Greenland eskimos and at 12% in Japan; both countries have more fish and less meat in their diets. However, it should go without saying that we cannot precisely gauge the contribution of EPA and related fatty acids to this remarkable statistics.