Cyclooxygenase occurs in three isoforms in the mammalian organism:

Cyclooxygenase occurs in three isoforms in the mammalian organism:

•     Cox-1 is constitutively expressed and responsible for most of the `housekeeping' functions of eicosanoids, including processes such as calcium metabolism in the bone, and stomach mucous membrane maintenance. It is also responsible for synthesis of thromboxanes in thrombocytes and of prostacyclin (PGI) in endothelial cells, which have antagonistic function in thrombocyte aggregation and activation (see later).

•     Cox-2 is inducible and mostly expressed in inflammato-ry cells; it is considered the main culprit in the release of prostaglandins at sites of inflammation. Since anti-in-flammatory therapy is the main therapeutic application of Cox inhibitors, there is considerable interest in the development of drugs selectively acting on this form.

•     Cox-3 is a splice variant of Cox-1. It has been characterized in the brain of dogs. Its selective inhibition by ac-etaminophen, along with the antipyretic and analgesic5 activity of that drug, suggests a major role of Cox-3 in triggering fever and pain. However, if the homologous splice sites were used with a primary transcript of the human Cox-1 gene, this would give rise to an mRNA containing a premature stop codon. It is not clear at present whether humans actually do possess a third vari-ant of Cox at all.

Most of the drugs that inhibit cyclooxygenase do inhib-it both Cox-1 and Cox-2; this applies to drugs such as di-clofenac, indomethacine, and acetylsalicylic acid. More re-cent developments have led to selective inhibitors of Cox Crystal structures of inhibitors bound to Cox-1 and Cox-2have been obtained, and they can be used together with mutagenesis experiments to understand the molecular in-teractions of inhibitor molecules with the active site. Such knowledge is useful, since it allows the development of more selective or more effective inhibitors to proceed in a targeted way.

As an example, the binding of diclofenac to the active site of Cox-2 is shown; its carboxyl group binds to the serine 530 residue (Figure 12.8a). In contrast, the carboxyl group of indomethacin points to arginine 120 and Tyr 355, much in the same way as the carboxylate of arachidonic acid does (not shown). Results from mutagenesis experiments cor-respond well with these findings (Figure 12.8b): While re placement of arginine 120 or tyrosine 355 strongly reduces the inhibitory potency of indomethacin but not diclofenac, the opposite behaviour is observed with the removal of ser-ine 530. All three residues are important with a third in-hibitor (piroxicam; Figure 12.9). 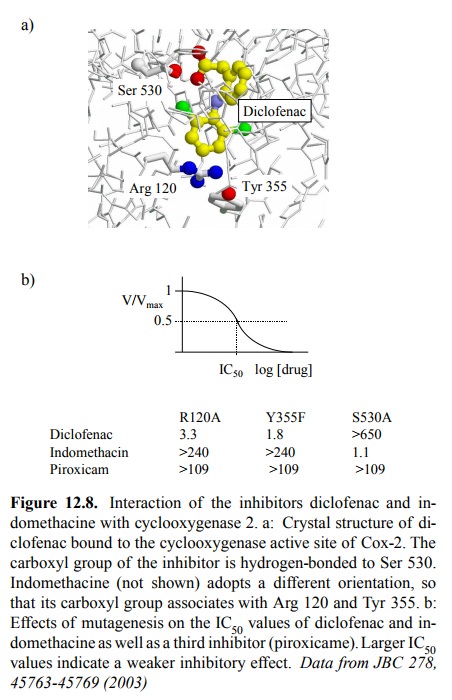 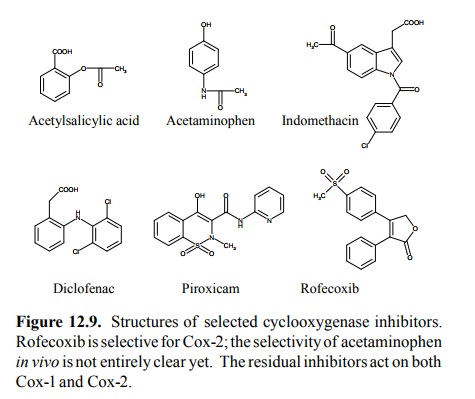 The covalent, irreversible mode of action of acetylsali-cylic acid is important in its use for inhibiting thrombocyte aggregation in patients with cardiovascular disease (more specifically, atherosclerosis). This is a practically very im portant application, since atherosclerosis is a very common disease, particularly in western countries.

Thrombocyte aggregation is promoted by thromboxanes, which are synthesized in thrombocytes, and is inhibited by prostaglandins I and E, which are released by endothelial cells (Figure 12.10a). As all of these are derived via Cox-1, we need to selectively inhibit Cox 1 in thrombocytes but not endothelial cells. How can such selectivity be possibly achieved? The solution to this dilemma lies in the different lifetimes of Cox-1 in the two cell types: In endothelial cells, the enzyme is turned over within hours; inactivated enzyme molecules will thus be replaced by newly synthesized ones. Thrombocytes, however, don't have a nucleus and there-fore lack protein synthesis; irreversibly inactivated enzyme molecules will therefore never be replaced (Figure 12.10b). If we properly adjust the dosage of acetylsalicylic acid, we can indeed maintain the enzyme activity in the endothelium yet efficiently inhibit it in the thrombocytes. Increasing the dosage, indeed, will reduce the beneficial drug effect, since both PGI/PGE and TXA synthesis will now be inhibited. 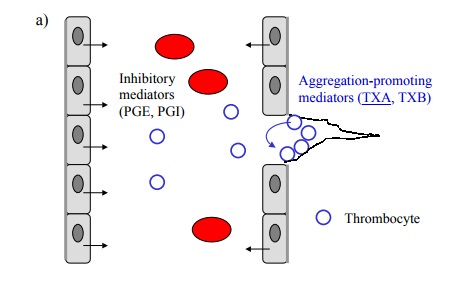 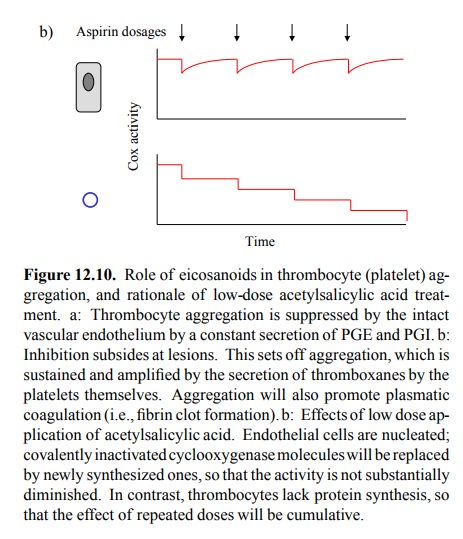 Another, more recent principle of limiting thrombocyte aggregation consists in the use of thromboxane receptor blockers. Examples are shown in Figure 12.11a. There even are drugs (presently experimental) that potently inhib-it both the thromboxane receptor and the enzyme throm-boxane A synthase. It is rather intriguing that one such drug molecule (BM-573, Figure 12.11b) could be obtained by only slight modification of a precursor (torasemide) that has only weak inhibitory activity at the receptor, and lacks any obvious similarity with thromboxane altogether. 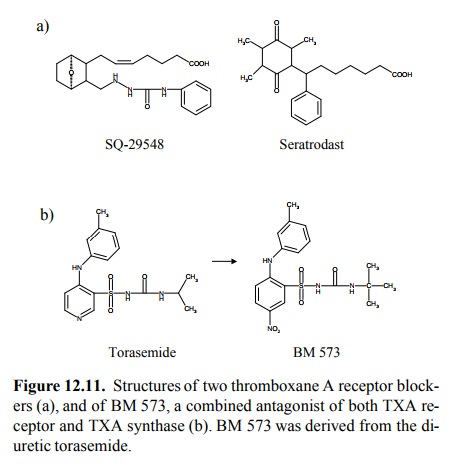