Eicosanoid mediators are derived from arachidonic acid (eicosatetraenoic) and related poly-unsaturated fatty acids, such as acid eicosapentanoic acid. These fatty acids are mainly found as constituents of phospholipids in cellular membranes (Figure 12.1a), and it is from there that they are mobilized for eicosanoid mediator synthesis. The major classes of eicosanoids are prostaglandins, thromboxanes, and leukotrienes. Eicosanoids are very widespread in the mammalian organism – most cells synthesize them. 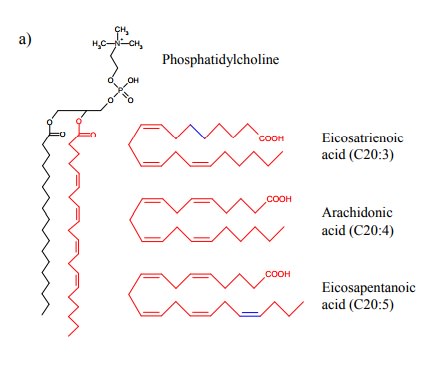 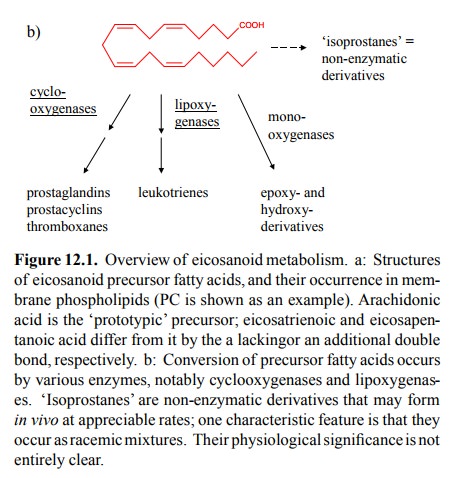 Figure 12.1. Overview of eicosanoid metabolism. a: Structures of eicosanoid precursor fatty acids, and their occurrence in mem-brane phospholipids (PC is shown as an example). Arachidonic acid is the `prototypic' precursor; eicosatrienoic and eicosapen-tanoic acid differ from it by the a lackingor an additional double bond, respectively. b: Conversion of precursor fatty acids occurs by various enzymes, notably cyclooxygenases and lipoxygenas-es. `Isoprostanes' are non-enzymatic derivatives that may form in vivo at appreciable rates; one characteristic feature is that they occur as racemic mixtures. Their physiological significance is not entirely clear.

Eicosanoids are involved in normal physiological processes such as:

•     Bone metabolism (deposition and mobilization of calci-um1: PGE and PGF

•     Thrombocyte aggregation and activation (stimulated by TXA, inhibited by PGE and PGI)

As you can see, the individual eicosanoid mediators typical-ly have multiple roles; from this, we can already infer that drugs acting on the eicosanoid metabolism will be prone to side effects.

Eicosanoid receptors are G protein-coupled receptors; known effector mechanisms include activation or inhibi-tion of adenylate cyclase and activation of phospholipase C. Duration of action is usually short; inactivation occurs by oxidative metabolism either locally or in the lung, which is strategically placed for complete clearance of the circulat-ing blood volume.