The first step in the formation of eicosanoid mediators consists in the release of the precursor fatty acids from the membrane phospholipids.

The first step in the formation of eicosanoid mediators consists in the release of the precursor fatty acids from the membrane phospholipids. This release may happen along several possible metabolic routes (Figure 12.2a). The ma-jor physiological mechanism of release consists in the acti-vation of a cytosolic phospholipase A2 (cPLA2) by Ca++ in response to an extracellular signal. cPLA2 then attaches to the nuclear (and probably ER) membranes, which appear to be the major reservoir of arachidonic acid and its analogs. 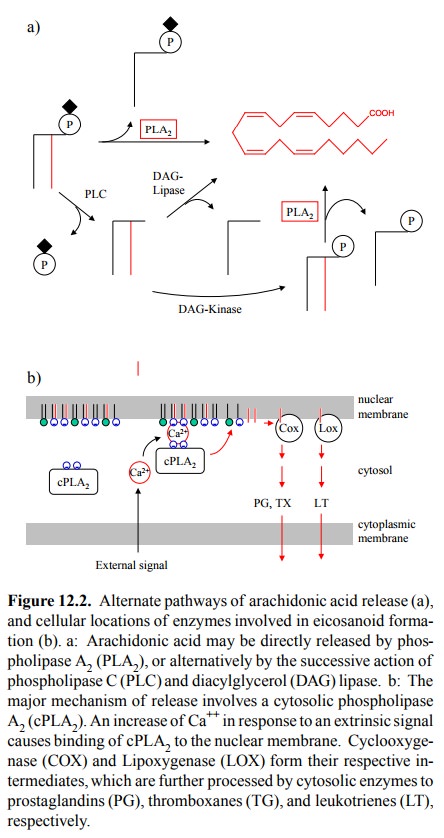 Figure 12.2. Alternate pathways of arachidonic acid release (a), and cellular locations of enzymes involved in eicosanoid forma-tion (b). a: Arachidonic acid may be directly released by phos-pholipase A2 (PLA2), or alternatively by the successive action of phospholipase C (PLC) and diacylglycerol (DAG) lipase. b: The major mechanism of release involves a cytosolic phospholipase A2 (cPLA2). An increase of Ca++ in response to an extrinsic signal causes binding of cPLA2 to the nuclear membrane. Cyclooxyge-nase (COX) and Lipoxygenase (LOX) form their respective in-termediates, which are further processed by cytosolic enzymes to prostaglandins (PG), thromboxanes (TG), and leukotrienes (LT), respectively.

The formation of the most important eicosanoid deriva-tives of arachidonic acid and its analogs is initiated by cy-clooxygenases (Cox) and lipoxygenases (Lox):

•      Cyclooxygenase, also called prostaglandin H synthase, converts arachidonic acid first into prostaglandin G 2 (PGG2) and then PGH2. PGH2 is the common precur-sor of prostaglandins E2 and F2, and of prostaglandin I2 (prostacyclin). It is also the precursor of thrombox-ane A2 (TXA2). Therefore, cyclooxygenase is the single most important enzyme and drug target in eicosanoid metabolism.

Lipoxygenase 5 converts arachidonic acid into 5-hydroperoxy-eicosatetraenoic acid (5-HPETE), which is the precursor of leukotrienes. Leukotrienes are formed mainly in leukocytes, e.g. macrophages and granulocytes, and they are potent pro-inflammatory me-diators. Suppression of leukotriene synthesis with in-hibitors of lipoxygenases is a fairly recent therapeutic principle in the treatment of asthma and chronic inflam-mation.

•     12- and 15-HPETE are formed by the correspond-ing lipoxygenases 12 and 15. They can be reduced to hydroxy- eicosatetraenoic acids (HETEs) and further converted to lipoxins (cf Figure 12.12). H have their own receptors and physiological roles, but they are not presently in the focus of interest of drug therapy or de-velopment.

The major `classical' drug target in prostaglandin metabolism is cyclooxygenase, which occurs in several isoforms: Cox-1, Cox-2, and apparently in some mam-mals Cox-3. This is due to the central role of its product prostaglandin H2 as a precursor of multiple eicosanoid me-diators (Figure 12.4). 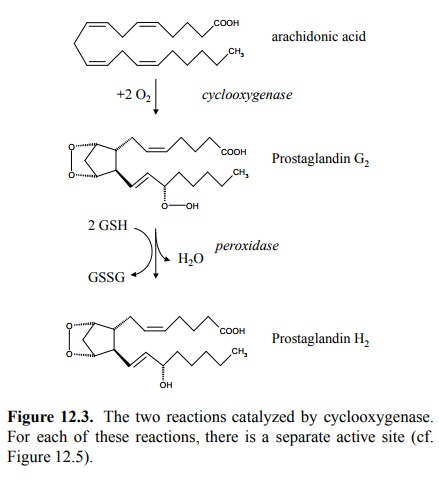 The synthesis of PGH2 occurs in two separate successive reactions (Figure 12.3), for which there are two separate active sites on the cyclooxygenase molecule2. The first re-action – also referred to as the cycloxygenase reaction – in-troduces two peroxy groups, one endoperoxide (forming a ring with carbons 9-11) and a hydroperoxide attached to po sition 15. The resulting product– prostaglandin G 2 – is quite unstable, yet it is able to dissociate from the enzyme and to rebind to the second active site of the same or another en-zyme molecule. There, the hydroperoxide is reduced to a simple hydroxy group, at the expense of two equivalents of reduced glutathione. This second step is called the peroxi-dase reaction. 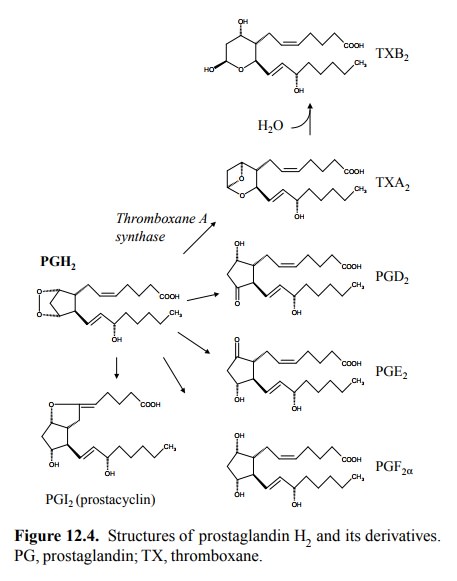 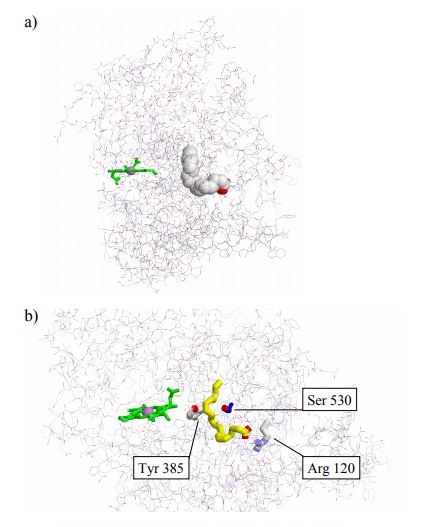 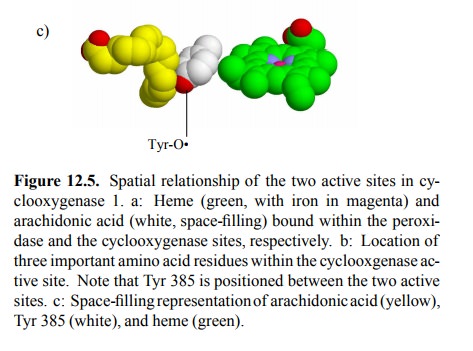 This tyrosyl radical will not exist in a newly translated en-zyme molecule, and once it is there, it may be lost due to capture of a hydrogen from somewhere else than the sub-strate. There thus has to be a mechanism for its forma-tion or regeneration. This mechanism is provided by the heme in the peroxidase active site. The heme radical cation, which forms as an intermediate during the peroxidase reac-tion, can abstract a hydrogen atom from the tyrosine -OH group, which thus may act as a reductant in place of one of the glutathione molecules normally functioning as cosub-strates (Figure 12.7b). 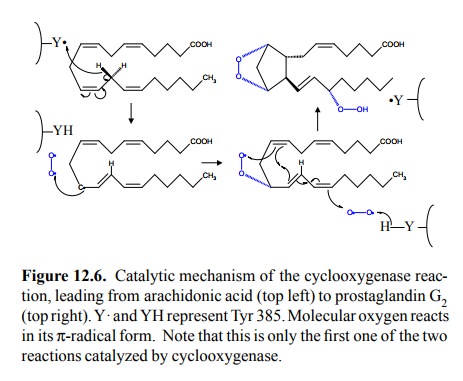 The peroxidase reaction (Figure 12.7a) can function in the absence of cyclooxygenase activity, because the intermedi-ate product (prostaglandin G2) can be provided by another enzyme molecule. In accord with this model, a sample of cyclooxygenase, when expressed recombinantly and in the absence of arachidonic acid substrate, will initially be in-active, but it will exhibit `burst' kinetics upon first contact with arachidonic acid, due to the cascading activation of more and more enzyme molecules by PGG24. 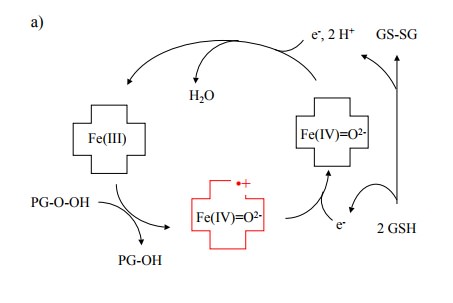 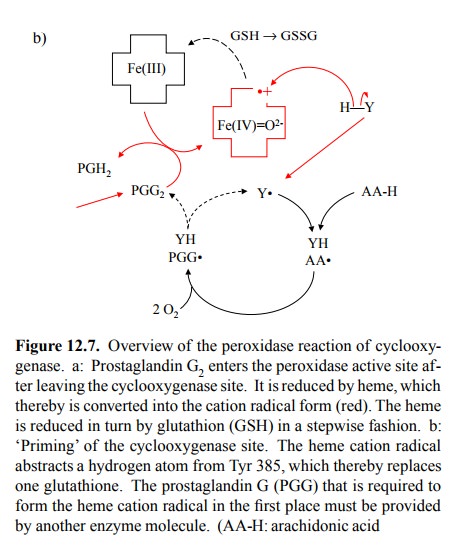