Inhibitors of NOS, while widely used in experimental re-search, are still in under investigation for clinical application.

Inhibitors of NOS, while widely used in experimental re-search, are still in under investigation for clinical application. As mentioned above, the release of endogenous NO may be pathologically enhanced in septicaemia, leading to septic shock. Treatment with NOS inhibitors has been sug-gested as early as ten years ago but is still in the experimen-tal stage. Inhibitors of iNOS are also of interest (and at the stage of animal experiments) in the treatment of chronic in-flammatory diseases, e.g. rheumatoid arthritis. Some such drugs are derivatives of arginine (Figure 11.13a). Interest-ingly, very simple alkyl derivatives of isothiourea are very potent inhibitors of NOS (Figure 11.13b). For clinical use it would, of course, be very favourable to have isoform-se-lective inhibitors. Some experimental inhibitors that indeed do show some preference for iNOS and nNOS, respectively, are shown in Figure 11.13c. In particular, selective inhibi-tion of iNOS should be advantageous in septic shock and in chronic inflammatory diseases. Data from animal models of septicaemia and of arthritis are promising. 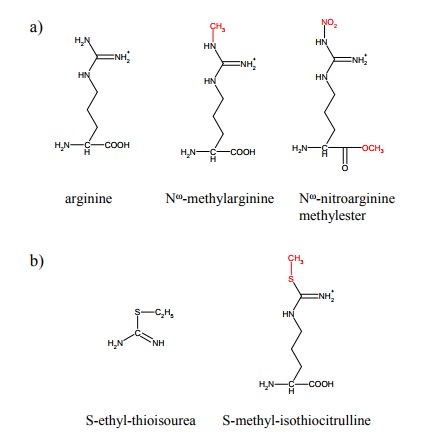 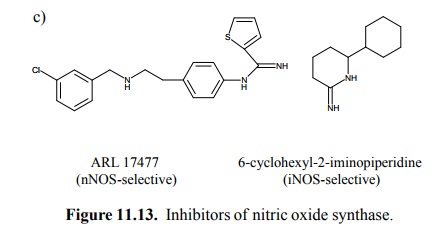 Finally, a discussion of nitric oxide would not be complete without mentioning one of the most successful drugs of the past decade – sildenafil 10, more widely known under its trade name (Viagra). Sildenafil is an inhibitor of the phos-phodiesterase subtype 5, which is selective for cGMP (Fig-ure 11.14). This enzyme removes cGMP and thus termi-nates the action of NO (if protein nitrosylation is neglect-ed). Sildenafil was not developed with its now-famous ap-plication in mind; instead, the idea was to come up with an-other vasodilatator. Its enhancing effect on penile erection gave rise to the discovery that NO actually is the transmitter that triggers this process. Thus, without NO, no one of us would even be here today! 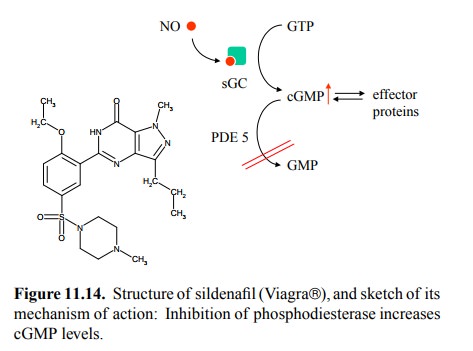 In theory, it should be possible to further augment the effect of sildenafil with nitrate drugs, shouldn't it? However, this cannot be recommended11 – it has been tried and resulted in heart attacks. Sildenafil may also cause disturbances of colour vision; this is due to the role of cGMP-gated chan-nels in the excitation of the sensory cells of the retina.