Biochemical mechanisms of NO signaling

How does NO signalling work? As mentioned above, NO is generated within the cytosol of the endothelial cell (or, in the CNS, the presynaptic cell).

Biochemical mechanisms of NO signaling

How does NO signalling work? As mentioned above, NO is generated within the cytosol of the endothelial cell (or, in the CNS, the presynaptic cell). As it is able to cross cell membranes with ease, it will diffuse into neighbour-ing cells, i.e the smooth muscle cells (in the blood ves-sel walls) or the post-synaptic nerve cells (in the case of nNOS). There, it will bind to a heme group that is attached to the enzyme called `soluble guanylate cyclase' (sGC). NO binding will activate sGC, which will result in the syn-thesis of cyclic guanosine monophosphate (cGMP) from GTP, in a manner analogous to adenylate cyclase, which as we've seen forms cAMP from ATP. However, the molec-ular mechanism of sGC activation by NO is quite special: Binding of NO to one side of the heme moiety of sGC will break the bond of the heme iron to a histidine residue on the opposite side, which in turn triggers the conformation-al change that leads to activation (Figure 11.5a). The heme moiety seems to be there solely for the purpose of NO bind-ing but not to be part of the active site. 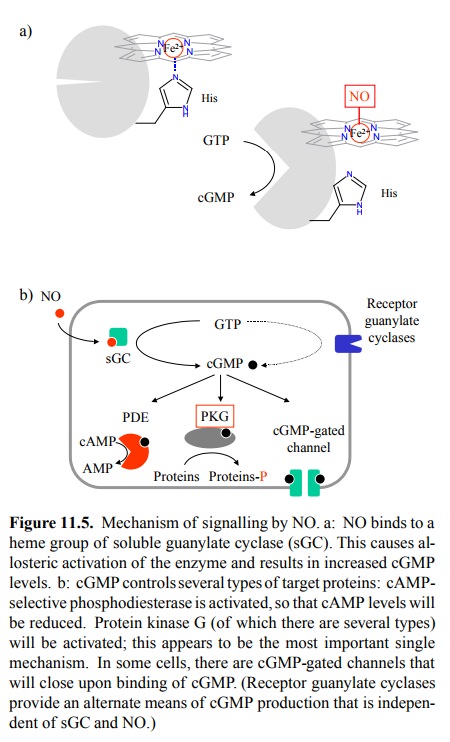 cGMP is a second messenger with a variety of effector mechanisms (Figure 11.5b), the foremost one of which is the activation of a cognate protein kinase2, commonly referred to as `protein kinase G' (PKG; G for cGMP-dependent). In addition, cGMP also controls ligand-gated ion channels in sensory cells as well as in nerve cells and smooth muscle cells; not much is know on the contribution of such channels to NO signalling. Finally, cGMP activates phosphodiesterase, which will inactivate cAMP by cleav-age to AMP. Thus, cGMP is somewhat of an antagonist of cAMP.

How does cGMP bring about relaxation of vascular smooth muscle? Several mechanisms, all of which involve PKG, have been proposed; none of them is at present certain to be `the' major one. Moreover, while several relevant changes in protein phosphorylation have been observed, it is not clear at present whether they are caused by PKG directly or by intervening secondary kinases. 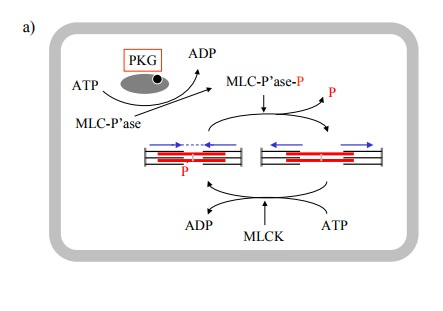 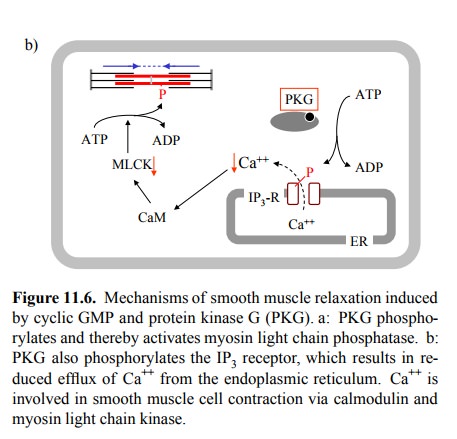 Another plausible candidate effector molecule for cGMP / PKG is the IP3 receptor channel in the endoplasmic reticu-lum (Figure 11.6b). Its phosphorylation reduces release of Ca++ from the ER in response to, e.g., adrenergic stimuli (recall that α1-receptors signal through IP3 / Ca++). The two mechanisms combined would cause both decreased phos-phorylation and increased dephosphorylation of myosin light chains. There is also experimental evidence indicat-ing that phospholipase C is inhibited by PKG, which would lead to inhibited formation of IP3, and that Ca++-ATP'ases in both the ER and the cytoplasmic membrane may be acti-vated. Since Ca++-ATP'ases remove Ca++ from the cytosol, this would further reduce the availability of Ca++ for con-traction. While all these mechanisms appear plausible, it is impossible at present to assess their relative importance in the effect of cGMP- and NO-mediated signalling. Howev-er, given the very strong relaxing effect of NO on the vas cular smooth muscle, it is reasonable to assume that more than one mechanism contributes significantly.

The second aspect of NO that needs to be considered is its chemical reactivity. In fact, NO binds similarly well to the heme moieties in hemoglobin and in guanylate cyclase, and reaction with hemoglobin is often considered a major mechanism of inactivation of NO. However, NO bound to non-oxygenated heme may be released again, so that hemoglobin may actually serve as a carrier. Alternative-ly, NO may be transferred from heme to protein cysteine sulfhydryl groups. One quite reactive such cysteine residue is located within hemoglobin itself. By removing NO from heme, the cysteine becomes S-nitrosylated itself.

Heme does, however, not seem to be required for protein S-nitrosylation to occur. The precise chemistry is unsettled; Figure 11.7a gives one hypothetic reaction scheme. Here, S-nitrosylation generates one equivalent of superoxide, which in turn (and particularly so at high concentrations of NO) may react with another molecule of NO to generate peroxynitrite. Peroxynitrite is very reactive and may oxi-dize other sites in proteins, or it may give rise to O-nitrosy-lation of protein tyrosine side chains. 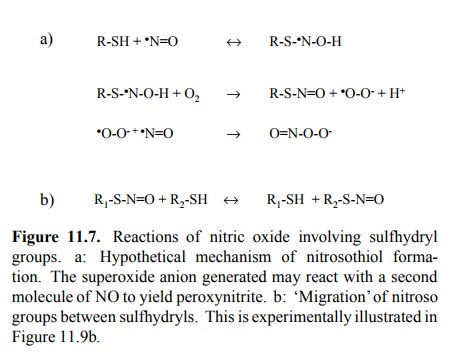 While different reaction mechanisms for S-nitrosylation have been proposed, a common motif in all of those I have seen is the participation of oxygen, which makes sense, as the hydrogen of the sulfhydryl group must be disposed of. NO groups can also be transferred from one sulfhydryl group to another (Figure 11.7b), so that covalently bound NO is rarely ever excluded from further circulation. This also means that protein S-nitrosylation should be reversible by way of transferring the nitrosyl group to a low-molec-ular weight thiol compound such as, e.g., free cysteine or glutathione.

That S-nitrosylation indeed occurs in vivo is illustrated in Figure 11.8. In the experiment depicted, the S-nitrosylated proteins have been visualized using an antibody that specifi cally recognizes the -S-N=O group as its epitope. This anti-body is targeted with a secondary antibody, which in turn is coupled to an enzyme. The latter releases a coloured, insol-uble product from a soluble `chromogenic' precursor (Fig-ure 11.8a). Localized precipitation of the insoluble stain will thus highlight the distribution and extent of protein S-nitrosylation. 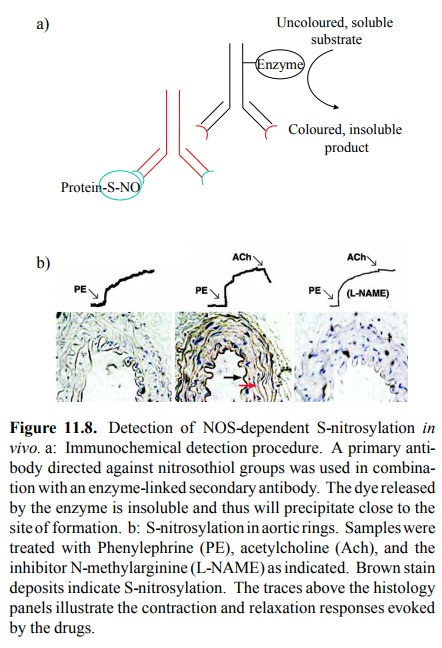 As expected, the most intensely stained region is the en-dothelium itself (Figure 11.8b, middle panel); this makes sense, as the concentration of NO should be highest at the site of formation. However, the surrounding smooth mus-cle tissue is stained as well, suggesting that indeed S-nitro-sylation might contribute to the muscle relaxation triggered by NO. That nitrosylation is indeed due to the activity of NOS, and that detection is reliable is evident from the fact that in the presence of an inhibitor of NOS no stain is accu-mulated (Figure 11.8b, right panel). 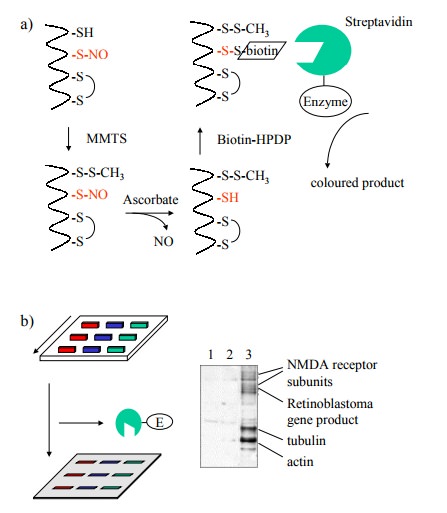 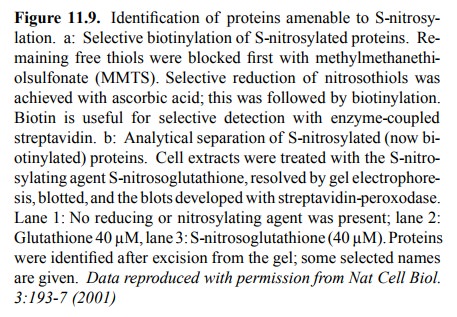 Does S-nitrosylation really have a regulatory role in the cell? This raises the question how specific protein S-ni-trosylation might be. From the non-enzymatic nature of the chemistry discussed above, one might expect S-nitro-sylation to be a very indiscriminate process, which would amount to a lot of `noise' in the signal – and thus, probably, no real signal at all, just noise. The number and identity of proteins affected by S-nitrosylation has been studied using a rather ingenious experimental approach, outlined in Fig-ures 11.9 and 11.10. In these experiments, the nitrosylated sulfhydryl groups were derivatized with biotin, which fa-cilitates selective detection and / or purification 3. The chal-lenge here consists in avoiding those cysteine residues that are either free or part of disulfide bonds. The free ones were first blocked with the reagent methylmethanethiol-sulfonate (MMTS). While one way to reduce nitrosothiol groups would be reaction with an excess of low molecular weight thiol (such as dithiothreitol or 2-mercaptoethanol), this would also reduce the disulfide bonds (both the cystines and the newly formed MMTS derivatives). Selective reduc-tion of nitrosothiols only can be achieved using ascorbic acid; in this way, only the formerly nitrosylated cysteines will be amenable to biotinylation. Biotinylated proteins can be selectively detected, after gel electrophoresis and blot-ting, with strepavidin that is coupled to an enzyme, again using a chromogenic substrate (Figure 11.9). 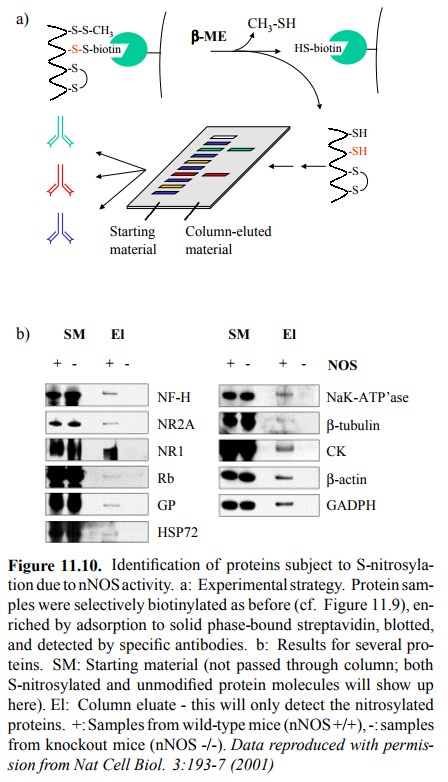 Figure 11.9b shows that a spectrum of proteins is affect-ed by S-nitrosylation within a sample from neuronal cells. The nitrosylating agent, in this case, was not NO itself but S-nitroso-glutathione, illustrating the fact that indeed the NO moiety may travel easily between sulfhydryl groups (cf Figure 11.7b). Given the fact that most proteins should have one or more free cysteine residues, the number of proteins that are detectably labeled is surprisingly small. Stained bands were recovered from the blots and identified by `pro-teomics' methods, i.e. proteolytic fragmentation, mass spectrometry, and Edman degradation. Some of the names of identified proteins seem to `ring a bell' with respect to possible involvement in signal transduction cascades – e.g., ion channels (including the NMDA subtype glutamate re-ceptor); others, however, don't (e.g. tubulin, actin4).

The same authors also examined the S-nitrosylation of pro-teins by nNOS, in neuronal tissue from mice (Figure 11.10). Conversion of nitrosylated to biotinylated cysteines was done as above. Biotinylation was, in this case, used to ex-tract the (formerly) nitrosylated proteins from the total mix-ture of cellular proteins by selective binding to solid-phase attached streptavidin. After retrieving the bound material by reduction with excess free thiol, the samples were run on a gel, blotted, and individual proteins detected using an tibodies directed not against S-N=O (it's no longer there, is it) but against those proteins themselves. Figure 11.10b shows a roundup of several nitrosylated proteins. For com-parison, the starting material (the total protein extract, with-out pre-selection by streptavidin binding) was run next to the samples retrieved from the streptavidin column. Fur-thermore, dependency of nitrosylation on NOS activity was confirmed by parallel processing of samples from nNOS knockout mice (nNOS -/-).

What does all this tell us?

It has been claimed that S-nitrosylation may have a similar-ly fundamental regulatory role as protein phosphorylation has. Is this claim substantiated by the findings presented? My personal impression is that it is not. However, this area is presently under intense investigation, and protein nitro sylation is considered by many as a viable mechanism of signal transduction.