Role of NO in macrophages

S- and O-nitrosylation are, however, very likely important in the second function of NO – i.e., in killing microbes by macrophages (Figure 11.11).

Role of NO in macrophages

S- and O-nitrosylation are, however, very likely important in the second function of NO – i.e., in killing microbes by macrophages (Figure 11.11). Macrophages are the most potent phagocytic cells in the immune system, in charge of dealing with hardy microbes such as mycobacteria, which are completely resistant to other phagocytic cells such as granulocytes. In these cells, the NO concentrations are sub-stantially higher than in nerve or endothelial cells. While reactive oxygen species have a substantial bactericidal ef-fect in the absence5 of NO, the latter enhances the ability of macrophages to kill bacteria. This may partially be due again to the ability of NO to cross membranes with ease, which would let it penetrate the interior of the microbial cell; most other effector molecules (including, e.g., they very toxic superoxide anion) cannot do this. Inside the mi-crobial cell NO might again act by binding to heme, e.g. within the microbial respiratory chain. In addition, NO also reacts with molecular oxygen or reactive oxygen species to yield peroxynitrite or N2O3, which will broaden the spectrum of antibacterial reactivity within and without the macrophage6 or microbes. 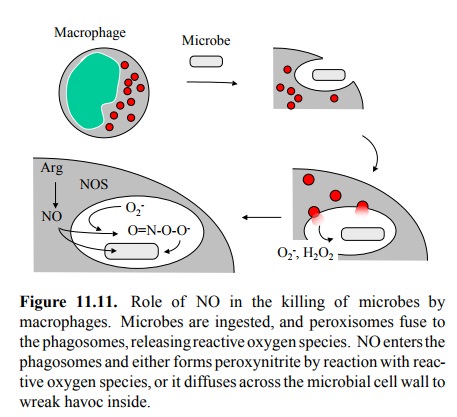 Why does inflammatory NO release matter here? In states of severe infection, patients may develop a state of patho-logically low blood pressure, known as septic shock7, which frequently is the ultimate cause of death. One of the mech-anisms that are considered to be responsible is the massive release of NO from macrophages. Accordingly, one of the therapeutic strategies that are being tried in septic shock consists in the application of NOS inhibitors .