The pharmacological activity of nitric oxide was recog-nized before it was identified as a physiological mediator it-self.

The pharmacological activity of nitric oxide was recog-nized before it was identified as a physiological mediator it-self. This discovery was made during an investigation into the nature of the so-called `endothelium-derived relaxing factor' (EDRF). The activity of EDRF can be triggered by the application of acetylcholine to the aorta of experimen-tal animals. In the aorta (as well as other blood vessels), not only the smooth muscle itself but also the endothelium is supplied with cholinergic nerve terminals and accord-ingly possesses acetylcholine receptors, which are of the muscarinic type (Figure 11.1a). After cutting the aorta into strips (Figure 11.1b), the endothelium can be removed me-chanically or enzymatically1. Aortic strips with or without endothelium will both respond with contraction to nora-drenaline or α-selective adrenergic agonists. However, if acetylcholine is applied subsequently, only the strip that re-tains its endothelium will respond with relaxation, whereas the one without will stay contracted. Thus, the endothelium is required for the relaxation of the smooth muscle to occur (Figure 11.2a). If a strip with the endothelium removed is placed next to one retaining the endothelium, and the entire assembly is exposed to first norepinephrine and then acetyl-choline, the endothelium-less strip will still relax, indicat-ing that EDRF is a diffusible substance (Figure 11.2b). 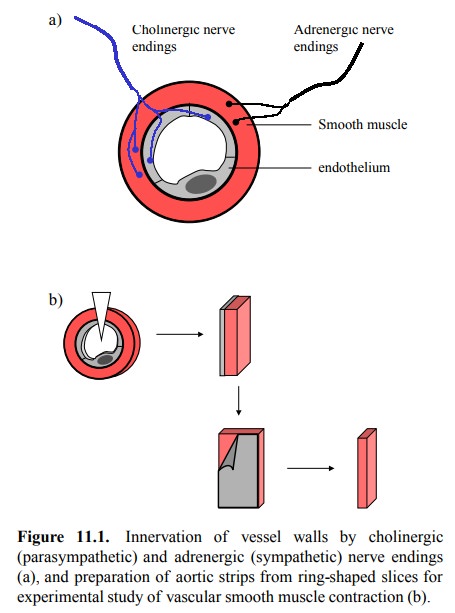 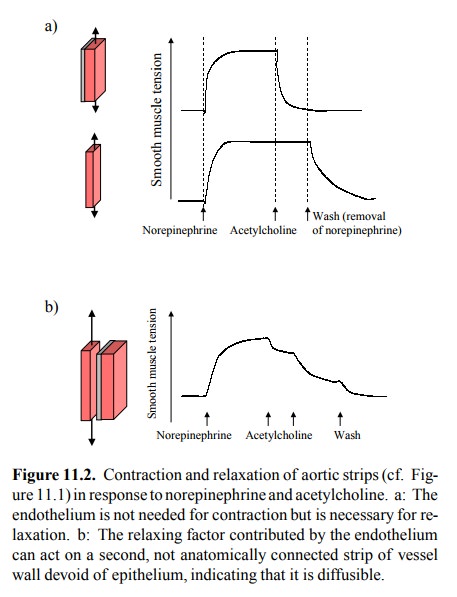 Approximately at the same time that EDRF was identi-fied as NO, it was found that the common mode of action of several drugs containing nitrate or similar functional groups consisted in the release of nitric oxide. The identi-ty of EDRF and NO was initially suspected based on cir-cumstantial evidence: Both NO and EDRF were found to bind to and be inactivated by hemoglobin (Figure 11.3a). Furthermore, the effects of both were augmented by super-oxide dismutase. This enzyme scavenges superoxide an-ions by disproportionation into O2 and H2O2. Since super-oxide reacts very rapidly with NO, superoxide dismutase will increase the lifetime and biological effect of NO (Fig-ure 11.3b). The identity was finally established by the direct detection of NO in biological samples using a chemilumi-nescence assay (Figure 11.3c). 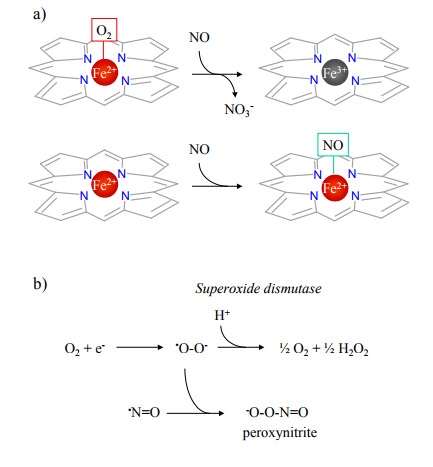 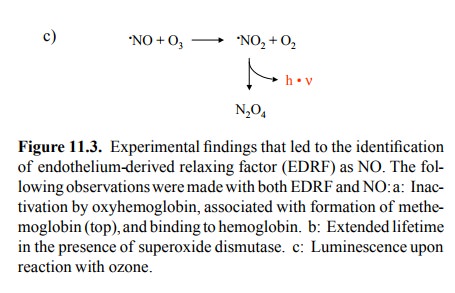