Some Special Aspects of Somatosensory Function

Some Special Aspects of Somatosensory Function

Function of the Thalamus in Somatic Sensation

When the somatosensory cortex of a human being is destroyed, that person loses most critical tactile sensibilities, but a slight degree of crude tactile sensibility does return. Therefore, it must be assumed that the thalamus (as well as other lower centers) has a slight ability to discriminate tactile sensation, even though the thalamus normally functions mainly to relay this type of information to the cortex.

Conversely, loss of the somatosensory cortex has little effect on one’s perception of pain sensation and only  a moderate effect on the perception of temperature. Therefore, there is much reason to believe that the lower brain stem, the thalamus, and other associated basal regions of the brain play dominant roles in discrimination of these sensibilities. It is interesting that these sensibilities appeared very early in the phylogenetic development of animals, whereas the critical tactile sensibilities and the somatosensory cortex were late developments.

In addition to somatosensory signals transmitted from the periphery to the brain, corticofugal signals are trans-mitted in the backward direction from the cerebral cortex to the lower sensory relay stations of the thala-mus, medulla, and spinal cord; they control the intensity of sensitivity of the sensory input.

Corticofugal signals are almost entirely inhibitory, so that when sensory input intensity becomes too great, the corticofugal signals automatically decrease transmission in the relay nuclei. This does two things: First, it decreases lateral spread of the sensory signals into adja-cent neurons and, therefore, increases the degree of sharpness in the signal pattern. Second, it keeps the sensory system operating in a range of sensitivity that is not so low that the signals are ineffectual nor so high that the system is swamped beyond its capacity to dif-ferentiate sensory patterns. This principle of corticofu-gal sensory control is used by all sensory systems, not only the somatic system.

Segmental Fields of Sensation— The Dermatomes

Each spinal nerve innervates a “segmental field” of the skin called a dermatome. The different dermatomes are shown in Figure 47–14. They are shown in the figure as if there were distinct borders between the adjacent der-matomes, which is far from true because much overlap exists from segment to segment. 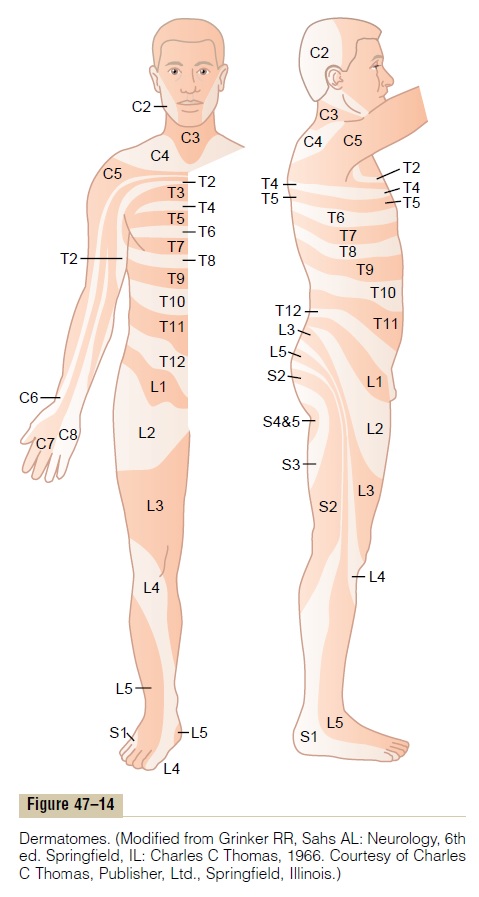 The figure shows that the anal region of the body lies in the dermatome of the most distal cord segment, der-matome S5. In the embryo, this is the tail region and the most distal portion of the body. The legs originate embryologically from the lumbar and upper sacral seg-ments (L2 to S3), rather than from the distal sacral seg-ments, which is evident from the dermatomal map. One can use a dermatomal map as shown in Figure 47–14 to determine the level in the spinal cord at which a cord injury has occurred when the peripheral sensations are disturbed by the injury.