The position senses are frequently also called proprioceptive senses. They can be divided into two subtypes:

The position senses are frequently also called proprioceptive senses. They can be divided into two subtypes:

(1) static position sense, which means conscious per-ception of the orientation of the different parts of the body with respect to one another, and (2) rate ofmovement sense, also called kinesthesia or dynamic proprioception.

Position Sensory Receptors. Knowledge of position, bothstatic and dynamic, depends on knowing the degrees of angulation of all joints in all planes and their rates of change. Therefore, multiple different types of recep-tors help to determine joint angulation and are used together for position sense.

For determining joint angulation in mid ranges of motion, among the most important receptors are the muscle spindles. They are also exceedingly importantin helping to control muscle movement. When the angle of a joint is changing, some muscles are being stretched while others are loosened, and the net stretch information from the spindles is transmitted into the computational system of the spinal cord and higher regions of the dorsal column system for deciphering joint angulations.

At the extremes of joint angulation, stretch of the ligaments and deep tissues around the joints is an addi-tional important factor in determining position. Types of sensory endings used for this are the pacinian cor-puscles, Ruffini’s endings, and receptors similar to the Golgi tendon receptors found in muscle tendons.

The pacinian corpuscles and muscle spindles are especially adapted for detecting rapid rates of change. It is likely that these are the receptors most responsi-ble for detecting rate of movement. 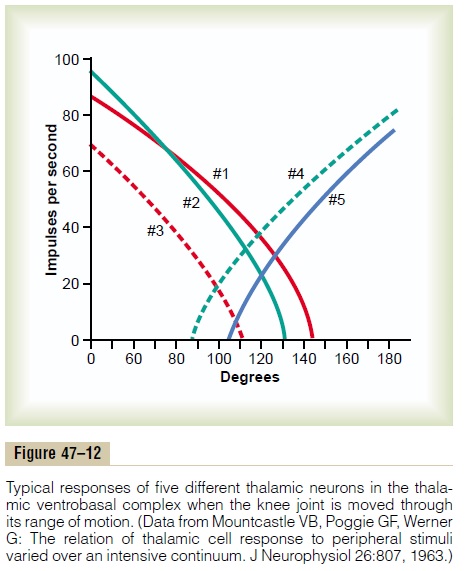