The ultimate goal of most sensory stimulation is to apprise the psyche of the state of the body and its surroundings.

The ultimate goal of most sensory stimulation is to apprise the psyche of the state of the body and its surroundings. Therefore, it is important that we discuss briefly some of the principles related to transmission of sensory stimulus intensity to the higher levels of the nervous system.

The first question that comes to mind is, how is it pos-sible for the sensory system to transmit sensory experi-ences of tremendously varying intensities? For instance, the auditory system can detect the weakest possible whisper but can also discern the meanings of an explo-sive sound, even though the sound intensities of these two experiences can vary more than 10 billion times; the eyes can see visual images with light intensities that vary as much as a half million times; and the skin can detect pressure differences of 10,000 to 100,000 times.

As a partial explanation of these effects, Figure 46–4 in the previous shows the relation of the recep-tor potential produced by the pacinian corpuscle to the intensity of the sensory stimulus. At low stimulus inten-sity, slight changes in intensity increase the potential markedly, whereas at high levels of stimulus intensity, further increases in receptor potential are slight. Thus, the pacinian corpuscle is capable of accurately measur-ing extremely minute changes in stimulus at low-intensity levels, but at high-intensity levels, the change in stimulus must be much greater to cause the same amount of change in receptor potential. 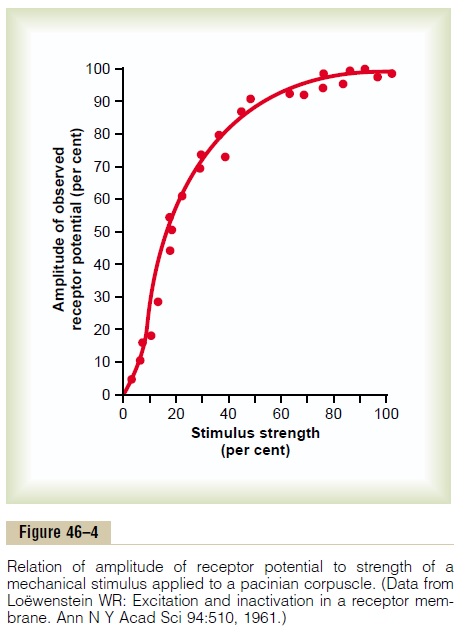 The transduction mechanism for detecting sound by the cochlea of the ear demonstrates still another method for separating gradations of stimulus intensity. When sound stimulates a specific point on the basilar membrane, weak sound stimulates only those hair cells at the point of maximum sound vibration. But as the sound intensity increases, many more hair cells in each direction farther away from the maximum vibratory point also become stimulated. Thus, signals are trans-mitted over progressively increasing numbers of nerve fibers, which is another mechanism by which stimulus intensity is transmitted to the central nervous system. This mechanism, plus the direct effect of stimulus inten-sity on impulse rate in each nerve fiber, as well as several other mechanisms, makes it possible for some sensory systems to operate reasonably faithfully at stimulus intensity levels changing as much as millions of times.

Importance of the Tremendous Intensity Range of Seensory Reception. Were it not for the tremendous intensityrange of sensory reception that we can experience, the various sensory systems would more often than not be operating in the wrong range. This is demonstrated by the attempts of most people, when taking photographs with a camera, to adjust the light exposure without using a light meter. Left to intuitive judgment of light inten-sity, a person almost always overexposes the film on bright days and greatly underexposes the film at twi-light. Yet, that person’s own eyes are capable of dis-criminating with great detail visual objects in bright sunlight or at twilight; the camera cannot do this without very special manipulation because of the narrow criti-cal range of light intensity required for proper exposure of film.