On entering the spinal cord through the spinal nerve dorsal roots, the large myelinated fibers from the spe-cialized mechanoreceptors divide almost immediately to form a medial branch and a lateral branch.

On entering the spinal cord through the spinal nerve dorsal roots, the large myelinated fibers from the spe-cialized mechanoreceptors divide almost immediately to form amedial branch and a lateral branch, shown by the right-hand fiber entering through the spinal root in Figure 47–2. The medial branch turns medially first and then upward in the dorsal column, proceeding by way of the dorsal column pathway all the way to the brain. 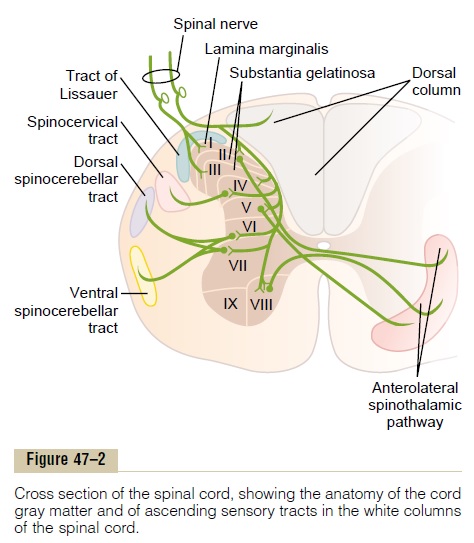 The lateral branch enters the dorsal horn of the cord gray matter, then divides many times to provide termi-nals that synapse with local neurons in the intermediate and anterior portions of the cord gray matter. These local neurons in turn serve three functions: (1) A major share of them give off fibers that enter the dorsal columns of the cord and then travel upward to the brain.(2) Many of the fibers are very short and terminate locally in the spinal cord gray matter to elicit local spinal cord reflexes,. (3) Others give rise to the spinocerebellar tracts, which we will discuss in relation to the function of the cerebellum.

The Dorsal Column–Medial Lemniscal Pathway. Note in Figure 47–3 that nerve fibers entering the dorsal columns pass uninterrupted up to the dorsal medulla, where they synapse in the dorsal column nuclei (the cuneate and gracile nuclei). From there, second-order neurons 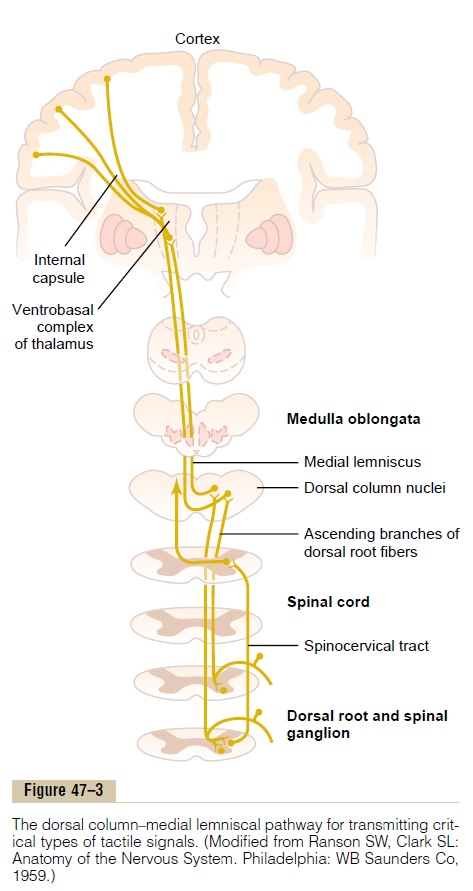 decussate immediately to the opposite side of the brain stem and continue upward through the medial lemnisci to the thalamus. In this pathway through the brain stem, each medial lemniscus is joined by additional fibers from the sensory nuclei of the trigeminal nerve; these fibers subserve the same sensory functions for the head that the dorsal column fibers subserve for the body.

In the thalamus, the medial lemniscal fibers terminate in the thalamic sensory relay area, called the ventrobasalcomplex. From the ventrobasal complex, third-order nerve fibers project, as shown in Figure 47–4, mainly tothe postcentral gyrus of the cerebral cortex, which is called somatic sensory area I (as shown in Figure 47–6, these fibers also project to a smaller area in the lateral parietal cortex called somatic sensory area II). 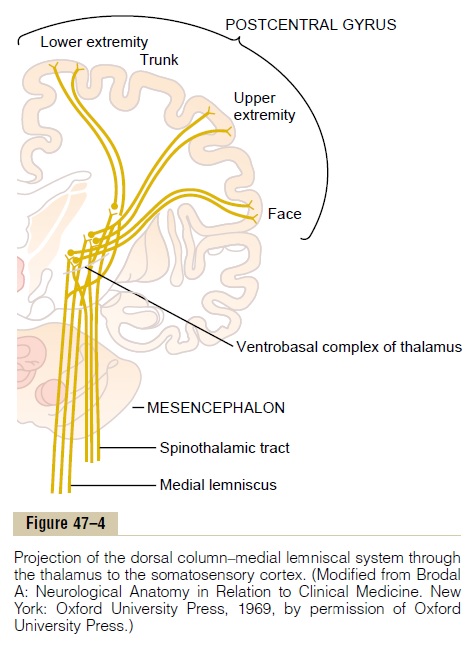 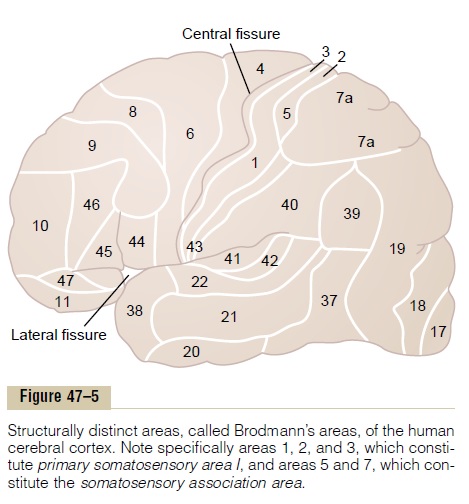 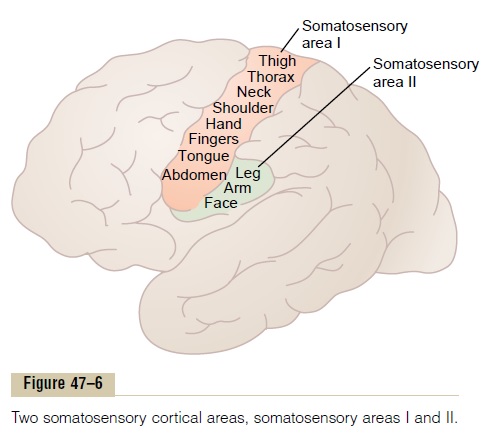 One of the distinguishing features of the dorsal column–medial lemniscal system is a distinct spatial orientation of nerve fibers from the individual parts of the body that is maintained throughout. For instance, in the dorsal columns of the spinal cord, the fibers from the lower parts of the body lie toward the center of the cord, whereas those that enter the cord at progres-sively higher segmental levels form successive layers laterally.