Detection and Transmission of Tactile Sensations

Interrelations Among the Tactile Sensations of Touch, Pressure, and Vibration. Althoughtouch, pressure, and vibration are frequently classified as separate sensations, they are all detected by the same types of receptors.

Detection and Transmission of Tactile Sensations

Interrelations Among the Tactile Sensations of Touch, Pressure, and Vibration. Althoughtouch, pressure, and vibration are frequently classified as separate sensations, they are all detected by the same types of receptors. There are three principal differences among them: (1) touch sensation generally results from stimulation of tactile receptors in the skin or in tissues immediately beneath the skin; (2) pressure sensation generally results from deformation of deeper tissues; and (3) vibration sensation results from rapidly repetitive sensory signals, but some of the same types of receptors as those for touch and pressure are used.

Tactile Receptors. There are at least six entirely different types of tactile recep-tors, but many more similar to these also exist.; their special characteristics are the following.

Second, a touch receptor with great sensitivity is the Meissner’s corpuscle (illustrated in Figure 46–1), anelongated encapsulated nerve ending of a large (type Aβ) myelinated sensory nerve fiber. Inside the capsu-lation are many branching terminal nerve filaments. These corpuscles are present in the nonhairy parts of the skin and are particularly abundant in the finger-tips, lips, and other areas of the skin where one’s ability to discern spatial locations of touch sensations is highly developed. Meissner’s corpuscles adapt in a fraction of a second after they are stimulated, which means that they are particularly sensitive to movement of objects over the surface of the skin as well as to low-frequency vibration. 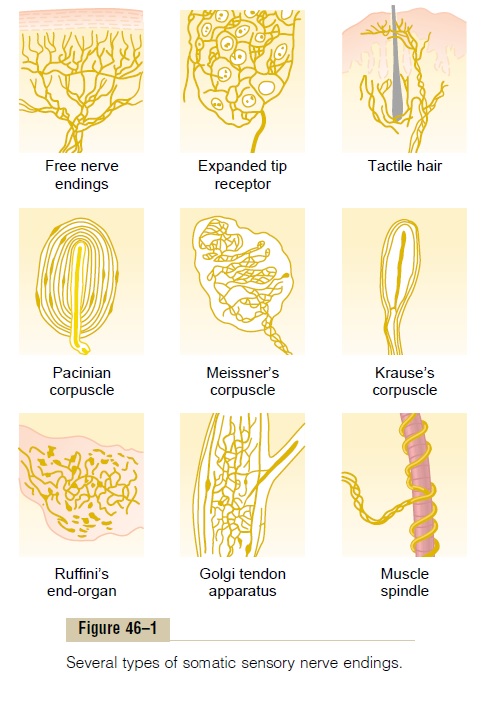 Third, the fingertips and other areas that contain large numbers of Meissner’s corpuscles usually also contain large numbers of expanded tip tactile receptors, one type of which is Merkel’s discs, shown in Figure 47–1. The hairy parts of the skin also contain moder-ate numbers of expanded tip receptors, even though they have almost no Meissner’s corpuscles. These receptors differ from Meissner’s corpuscles in that they transmit an initially strong but partially adapting signal and then a continuing weaker signal that adapts only slowly. Therefore, they are responsible for giving steady-state signals that allow one to determine continuous touch of objects against the skin. 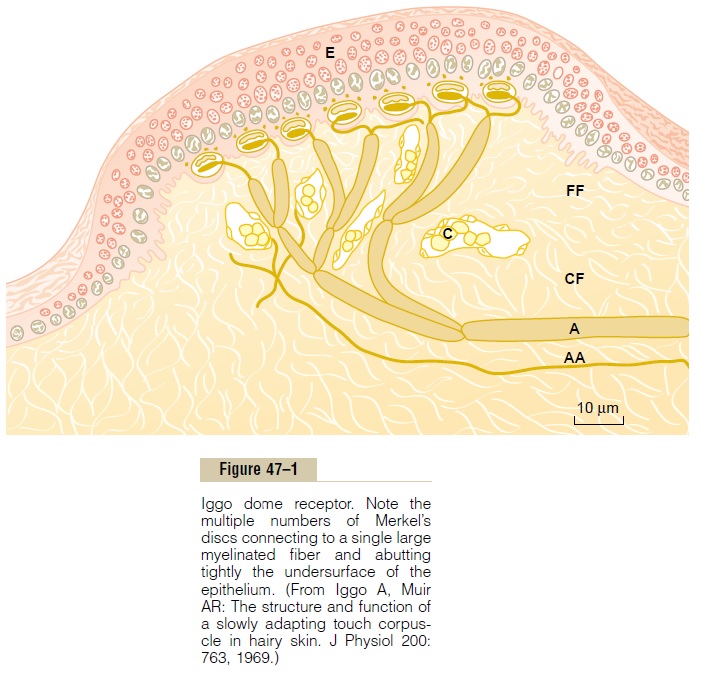 Merkel’s discs are often grouped together in a receptor organ called the Iggo dome receptor, which projects upward against the underside of the epithe-lium of the skin, as also shown in Figure 47–1. This causes the epithelium at this point to protrude outward, thus creating a dome and constituting an extremely sensitive receptor. Also note that the entire group of Merkel’s discs is innervated by a single large myelinated nerve fiber (type Aβ). These receptors, along with the Meissner’s corpuscles discussed earlier, play extremely important roles in localizing touch sensations to specific surface areas of the body and in determining the texture of what is felt.

Fourth, slight movement of any hair on the body stimulates a nerve fiber entwining its base. Thus, each hair and its basal nerve fiber, called the hair end-organ, are also a touch receptor. This receptor adapts readily and, like Meissner’s corpuscles, detects mainly (a) movement of objects on the surface of the body or (b) initial contact with the body.

Fifth, located in the deeper layers of the skin and also in still deeper internal tissues are many Ruffini’send-organs, which are multibranched, encapsulatedendings, as shown in Figure 46–1. These endings adapt very slowly and, therefore, are important for signaling continuous states of deformation of the tissues, such as heavy prolonged touch and pressure signals. They are also found in joint capsules and help to signal the degree of joint rotation.

Sixth, pacinian corpuscles, lie both immediately beneath the skin and deep in the fascial tissues of the body. They are stimulated only by rapid local compression of the tissues because they adapt in a few hundredths of a second. Therefore, they are particularly important for detecting tissue vibration or other rapid changes in the mechanical state of the tissues.

Some tactile free nerve endings transmit by way of type C unmyelinated fibers at velocities from a frac-tion of a meter up to 2 m/sec; these send signals into the spinal cord and lower brain stem, probably sub-serving mainly the sensation of tickle.

Thus, the more critical types of sensory signals— those that help to determine precise localization on the skin, minute gradations of intensity, or rapid changes in sensory signal intensity—are all transmit-ted in more rapidly conducting types of sensory nerve fibers. Conversely, the cruder types of signals, such as crude pressure, poorly localized touch, and especially tickle, are transmitted by way of much slower, very small nerve fibers that require much less space in the nerve bundle than the fast fibers.

All tactile receptors are involved in detection of vibra-tion, although different receptors detect different fre-quencies of vibration. Pacinian corpuscles can detect signal vibrations from 30 to 800 cycles per second because they respond extremely rapidly to minute and rapid deformations of the tissues, and they also trans-mit their signals over type Aβ nerve fibers, which can transmit as many as 1000 impulses per second. Low-frequency vibrations from 2 up to 80 cycles per second, in contrast, stimulate other tactile receptors, especially Meissner’s corpuscles, which are less rapidly adapting than pacinian corpuscles.

Neurophysiologic studies have demonstrated the exis-tence of very sensitive, rapidly adapting mechano-receptive free nerve endings that elicit only the tickle and itch sensations. Furthermore, these endings are found almost exclusively in superficial layers of the skin, which is also the only tissue from which the tickle and itch sensations usually can be elicited. These sen-sations are transmitted by very small type C, unmyeli-nated fibers similar to those that transmit the aching, slow type of pain.

The purpose of the itch sensation is presumably to call attention to mild surface stimuli such as a flea crawling on the skin or a fly about to bite, and the elicited signals then activate the scratch reflex or other maneuvers that rid the host of the irritant. Itch can be relieved by scratching if this removes the irritant or if the scratch is strong enough to elicit pain. The pain signals are believed to suppress the itch signals in the cord by lateral inhibition.