Basic Neuronal Circuit in the Dorsal Column–Medial Lemniscal System. The lower part of Figure 47–9 shows the basic organization of the neuronal circuit of the spinal cord dorsal column pathway, demonstrating that at each synaptic stage, divergence occurs. The upper curves of the figure show that the cortical neurons that discharge to the greatest extent are those in a central part of the cortical “field” for each respective receptor. Thus, a weak stimulus causes only the centralmost neurons to fire. A stronger stimulus causes still more neurons to fire, but those in the center discharge at a considerably more rapid rate than do those farther away from the center. 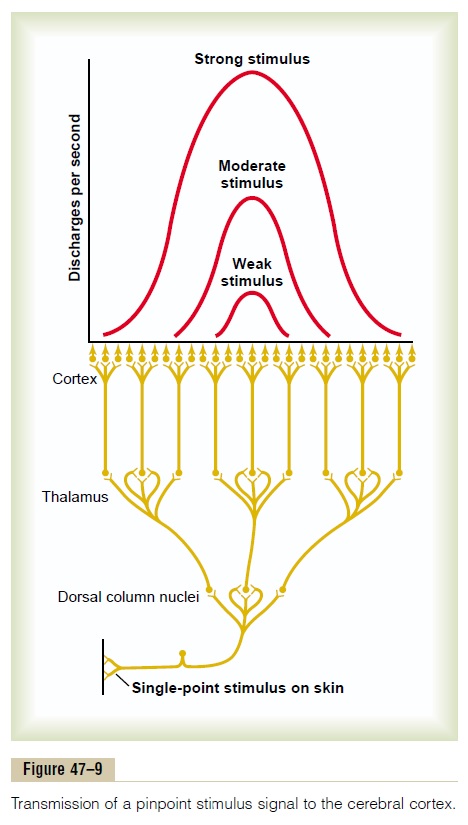 Two-Point Discrimination. A method frequently used totest tactile discrimination is to determine a person’s so-called “two-point” discriminatory ability. In this test, two needles are pressed lightly against the skin at the same time, and the person determines whether two points of stimulus are felt or one point. On the tips of the fingers, a person can distinguish two separate points even when the needles are as close together as 1 to 2 millimeters. However, on the person’s back, the needles must usually be as far apart as 30 to 70 millimeters before two separate points can be detected. The reason for this difference is the different numbers of specialized tactile receptors in the two areas.

Figure 47–10 shows the mechanism by which the dorsal column pathway (as well as all other sensory pathways) transmits two-point discriminatory infor-mation. This figure shows two adjacent points on the skin that are strongly stimulated as well as the areas of the somatosensory cortex (greatly enlarged) that are excited by signals from the two stimulated points. The blue curve shows the spatial pattern of cortical excitation when both skin points are stimulated simul-taneously. Note that the resultant zone of excitation has two separate peaks. These two peaks, separated by a valley, allow the sensory cortex to detect the pres-ence of two stimulatory points, rather than a single point. The capability of the sensorium to distinguish this presence of two points of stimulation is strongly influenced by another mechanism, lateral inhibition. 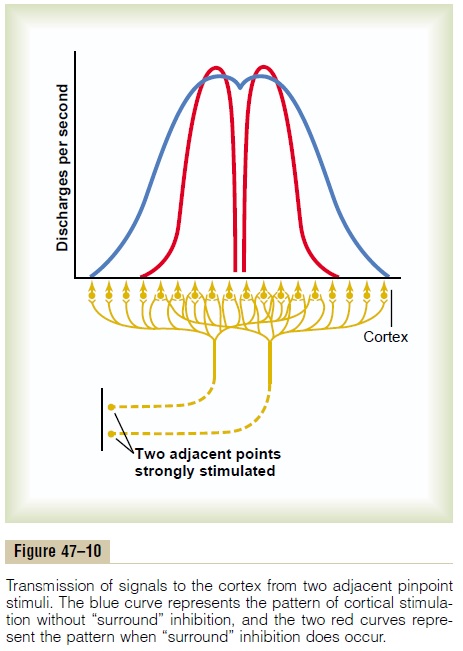 Effect of Lateral Inhibition (Also Called Surround Inhibition) to Increase the Degree of Contrast in the Perceived Spatial Pattern. As pointed out, virtually every sensory pathway, when excited, gives rise simultane-ously to lateral inhibitory signals; these spread to the sides of the excitatory signal and inhibit adjacent neurons. For instance, consider an excited neuron in a dorsal column nucleus. Aside from the central excitatory signal, short lateral pathways transmit inhibitory signals to the surrounding neurons. That is, these signals pass through additional interneurons that secrete an inhibitory transmitter.

The importance of lateral inhibition is that it blocks lateral spread of the excitatory signals and, therefore, increases the degree of contrast in the sensory pattern perceived in the cerebral cortex.

In the case of the dorsal column system, lateral inhibitory signals occur at each synaptic level—for instance, in (1) the dorsal column nuclei of the medulla, (2) the ventrobasal nuclei of the thalamus, and (3) the cortex itself. At each of these levels, the lateral inhibition helps to block lateral spread of the excitatory signal. As a result, the peaks of excitation stand out, and much of the surrounding diffuse stimu-lation is blocked. This effect is demonstrated by the two red curves in Figure 47–10, showing complete separation of the peaks when the intensity of lateral inhibition is great.

The dorsal column system also is of particular impor-tance in apprising the sensorium of rapidly changing peripheral conditions. Based on recorded action potentials, this system can recognize changing stimuli that occur in as little as 1/400 of a second.

Vibratory Sensation. Vibratory signals are rapidlyrepetitive and can be detected as vibration up to 700 cycles per second. The higher-frequency vibratory signals originate from the pacinian corpuscles in the skin and deeper tissues, but lower-frequency signals (below about 200 per second) can originate from Meissner’s corpuscles as well. These signals are trans-mitted only in the dorsal column pathway. For this reason, application of vibration (e.g., from a “tuning fork”) to different peripheral parts of the body is an important tool used by neurologists for testing func-tional integrity of the dorsal columns.