The somatoform disorders class was created for clinical utility, not on the basis of an assumed common etiology or mechanism.

The somatoform disorders are a major diagnostic class in the Diagnostic and Statistical Manual of Mental Disorders, Fourth Edition, Text Revision (DSM-IV-TR) (American Psychiatric Association, 2000) that groups together conditions characterized by physical symptoms suggestive of but not fully explained by a general medical condition or the direct effects of a substance. In this class, symptoms are not intentionally produced and are not attributable to another mental disorder. To warrant a diagnosis, symptoms must be clinically significant in terms of causing distress or impairment in important areas of functioning. As summarized in Table 54.1, the disorders included in this class are somatization disorder, undifferentiated somatoform disorder, conversion dis-order, pain disorder, hypochondriasis, body dysmorphic disorder and somatoform disorder not otherwise specified (NOS). 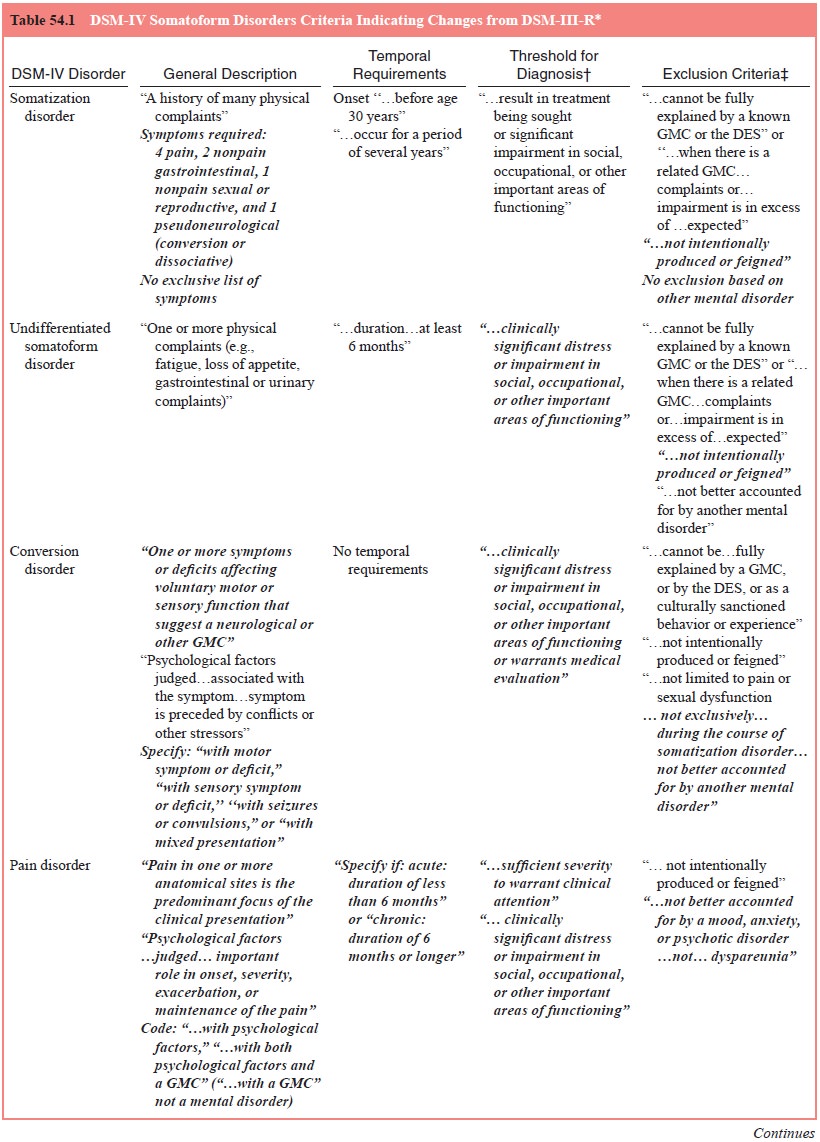 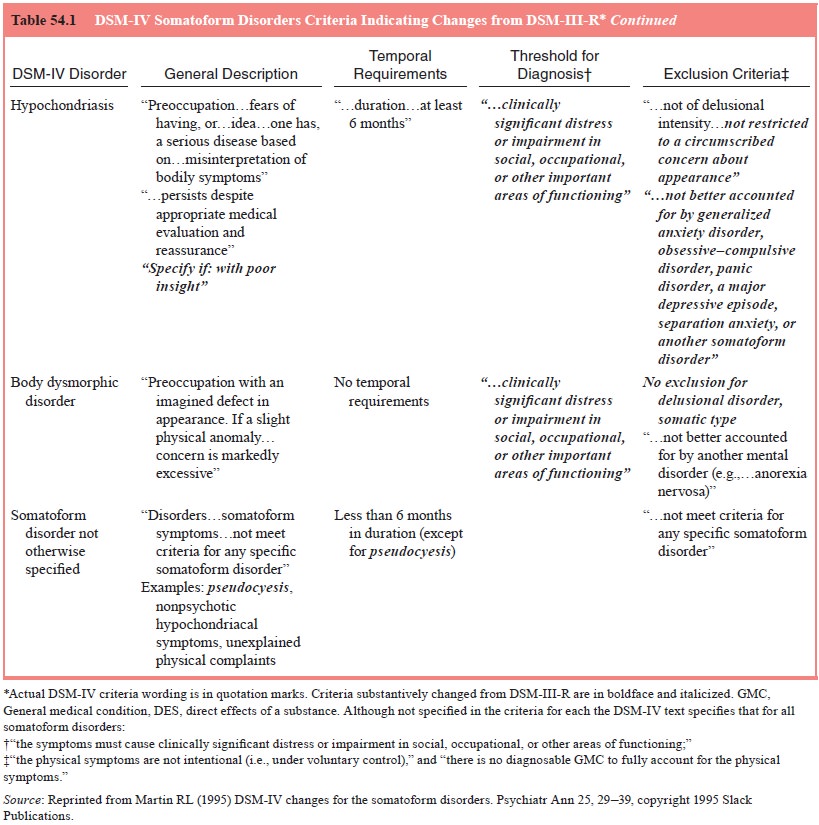 The somatoform disorders class was created for clinical utility, not on the basis of an assumed common etiology or mech-anism. In DSM-IV-TR terms, it was designed to facilitate the differential diagnosis of conditions in which the first diagnostic concern is the need to “exclude occult general medical conditions or substance-induced etiologies for the bodily symptoms”. As shown in Figure 54.1, only after such explanations are reasonably excluded should somatoform disorders be considered. 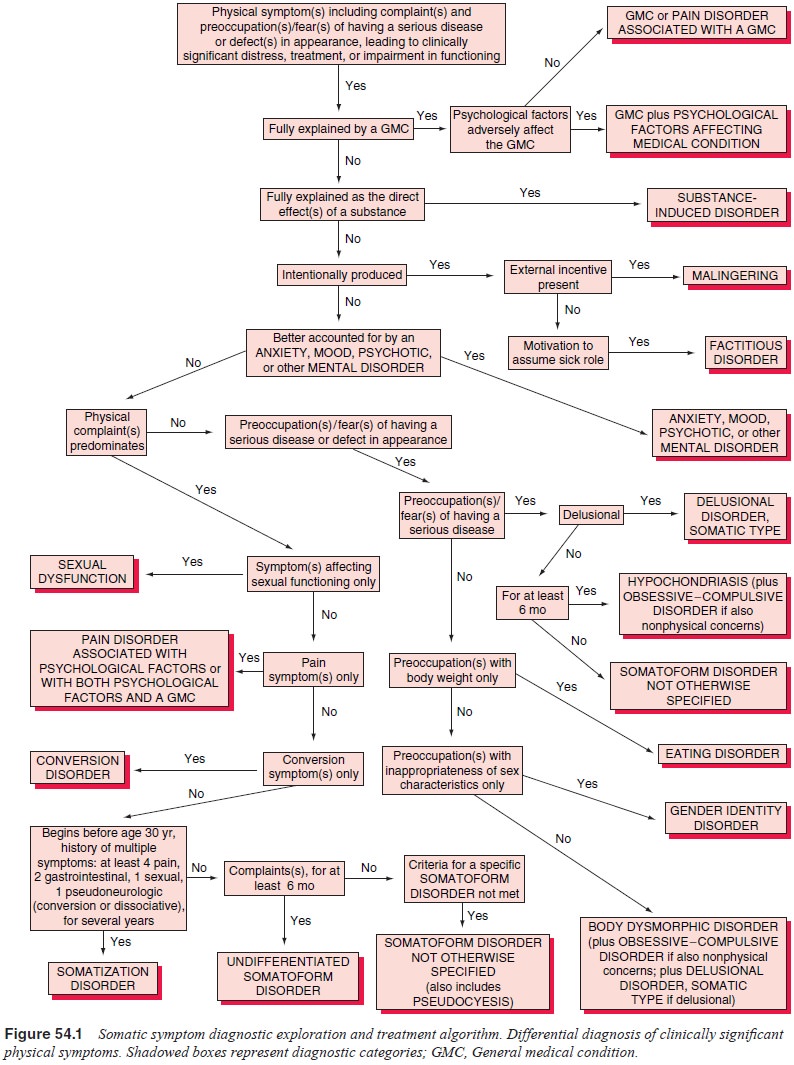 Many criticisms of the somatoform disorder category have been raised and they include contentions that because the category is delineated on the basis of presenting symptoms, it is “superfi-cial”; that the individual disorders are not qualitatively distinct from one another or from “normality” and hence would be better described dimensionally rather than differentiated categorically; that the disorders are derived from hospital rather than commu-nity- or primary care-based populations; and, perhaps the most se-rious challenge, that the grouping “gives the spurious impression of understanding”. On the other hand, proponents maintain that the somatoform grouping represents a major advance over previ-ous systems and that segregation of such disorders into a class has helped clarify the conceptualization of the “mind–body” distinc-tion, promoted greater consistency in terminology, and led to bet-ter descriptive distinctions between specific disorders. Support-ers contend that maintaining this diagnostic class will foster more generalizable and thereby more clinically applicable research.

The somatoform disorder concept should be distin-guished from traditional concepts of “psychosomatic illness” and “somatization”. The psychosomatic illnesses involved structural or physiological changes hypothesized as deriving from psychologi-cal factors. In the DSM-IV somatoform disorders, such objective changes are generally not evident. The “classic” psychosomatic illnesses of Alexander (1950) included bronchial asthma, ulcerativecolitis, thyrotoxicosis, essential hypertension, rheumatoid arthri-tis, neurodermatitis and peptic ulcer. In DSM-IV, most of these ill-nesses would be diagnosed as a general medical condition on Axis III, and in some cases with an additional designation of psychologi-cal factors affecting medical condition on Axis I. By definition, the diagnosis of “psychological factors affecting medical condition” is not a psychiatric disorder, but it is included in DSM-IV in the sec-tion for other conditions that may be a focus of clinical attention; it involves the presence of one or more specific psychological or be-havioral factors that adversely affect a general medical condition.

The descriptive use of the term “somatization” in somati-zation disorder is not to be confused with theories that generally postulate a somatic expression of psychological distress. Empirical studies suggest that there is no single theory that can adequately explain somatization, which is not only multifactorially deter-mined but is an exceedingly complex phenomenon. Furthermore, treatment strategies derived from somatization theories have not proven effective. For example, the postulation that patients with so-matoform disorders are alexithymic, that is, are unable to process emotions and psychological conflicts verbally and therefore do so somatically, suggested that teaching such patients to “appreciate” and “verbalize” their emotions would circumvent the need to “so-matize” them. Such treatment approaches have been ineffective.