Solute and Water Transport in the Loop of Henle

Solute and Water Transport in the Loop of Henle 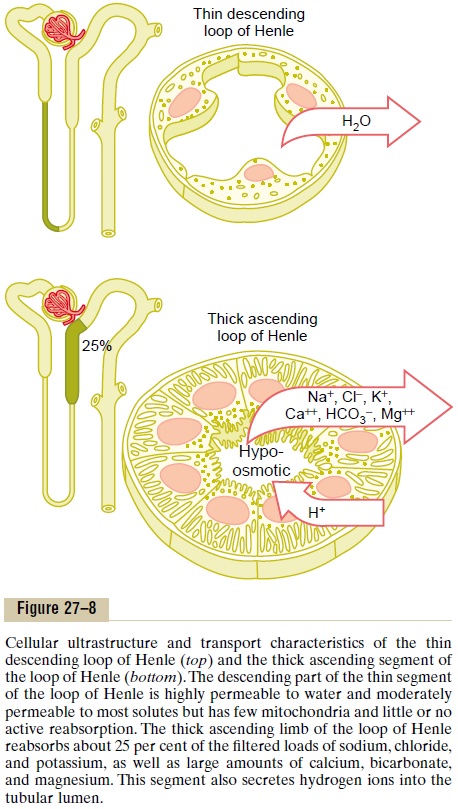 The descending part of the thin segment is highly permeable to water and moderately permeable to most solutes, including urea and sodium. The function of this nephron segment is mainly to allow simple dif-fusion of substances through its walls. About 20 per cent of the filtered water is reabsorbed in the loop of Henle, and almost all of this occurs in the thin descend-ing limb. The ascending limb, including both the thin and the thick portions, is virtually impermeable to water, a characteristic that is important for concen-trating the urine.

The thick segment of the loop of Henle, which begins about halfway up the ascending limb, has thick epithelial cells that have high metabolic activity and are capable of active reabsorption of sodium, chloride, and potassium (see Figure 27–8). About 25 per cent of the filtered loads of sodium, chloride, and potassium are reabsorbed in the loop of Henle, mostly in the thick ascending limb. Considerable amounts of other ions, such as calcium, bicarbonate, and magnesium, are also reabsorbed in the thick ascending loop of Henle.

The thin segment of the ascending limb has a much lower reabsorptive capacity than the thick segment, and the thin descending limb does not reabsorb sig-nificant amounts of any of these solutes.

An important component of solute reabsorption in the thick ascending limb is the sodium-potassium ATPase pump in the epithelial cell basolateral mem-branes. As in the proximal tubule, the reabsorption of other solutes in the thick segment of the ascending loop of Henle is closely linked to the reabsorptive capability of the sodium-potassium ATPase pump, which maintains a low intracellular sodium concentra-tion. The low intracellular sodium concentration in turn provides a favorable gradient for movement of sodium from the tubular fluid into the cell. In thethick ascending loop, movement of sodium across the luminal membrane is mediated primarily by a 1-sodium, 2-chloride, 1-potassium co-transporter (Figure 27–9). This co-transport protein carrier in the luminal membrane uses the potential energy released by downhill diffusion of sodium into the cell to drive the reabsorption of potassium into the cell against a concentration gradient. 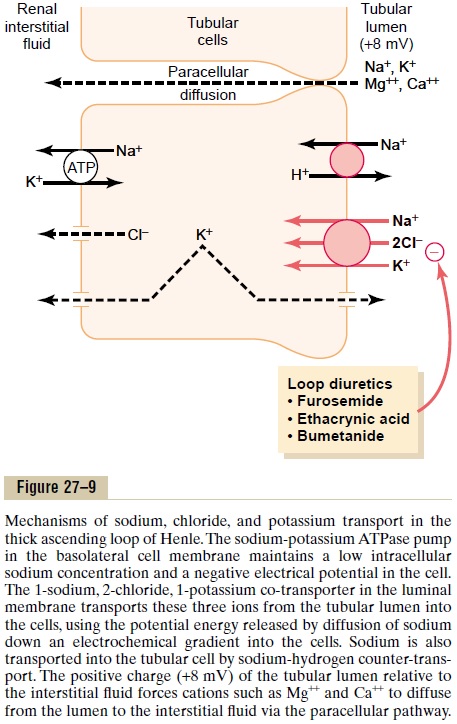 The thick ascending limb of the loop of Henle is the site of action of the powerful “loop” diureticsfurosemide, ethacrynic acid, and bumetanide, all ofwhich inhibit the action of the sodium 2-chloride, potassium co-transporter.

The thick ascending limb also has a sodium-hydrogen counter-transport mechanism in its luminal cell membrane that mediates sodium reabsorption and hydrogen secretion in this segment.

The thick segment of the ascending loop of Henle is virtually impermeable to water. Therefore, most of thewater delivered to this segment remains in the tubule, despite reabsorption of large amounts of solute. The tubular fluid in the ascending limb becomes very dilute as it flows toward the distal tubule, a feature that is important in allowing the kidneys to dilute or concen-trate the urine under different conditions.