The thick segment of the ascending limb of the loop of Henle empties into the distal tubule.

Approximately 5 percent of the filtered load of sodium chloride is reabsorbed in the early distal tubule. The sodium-chloride co-transporter moves sodium chloride from the tubular lumen into the cell, and the sodium-potassium ATPase pump transports sodium out of the cell across the basolateral mem-brane (Figure 27–10). Chloride diffuses out of the cell into the renal interstitial fluid through chloride chan-nels in the basolateral membrane. The thiazide diuret-ics, which are widely used to treat disorders such ashypertension and heart failure, inhibit the sodium-chloride co-transporter. 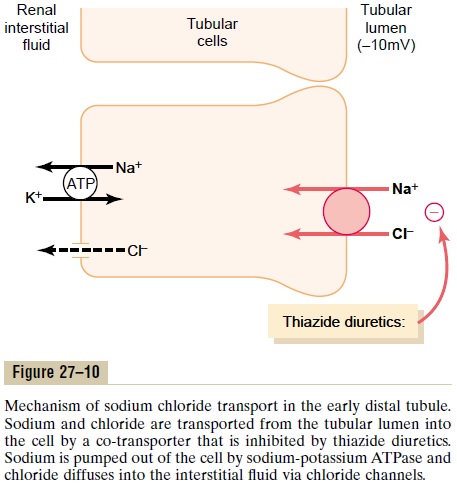