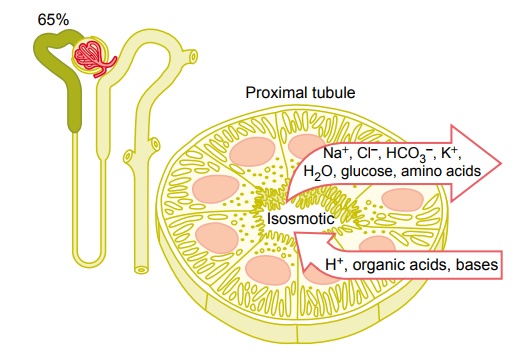 Normally, about 65 per cent of the filtered load of sodium and water and a slightly lower percentage of filtered chloride are reabsorbed by the proximal tubule before the filtrate reaches the loops of Henle.

Normally, about 65 per cent of the filtered load of sodium and water and a slightly lower percentage of filtered chloride are reabsorbed by the proximal tubule before the filtrate reaches the loops of Henle. These percentages can be increased or decreased in different physiologic conditions, as discussed later.

Proximal Tubules Have a High Capacity for Active and Passive Reabsorption. The high capacity of the proximal tubulefor reabsorption results from its special cellular char-acteristics, as shown in Figure 27–6. The proximal tubule epithelial cells are highly metabolic and have large numbers of mitochondria to support potent active transport processes. In addition, the proximal 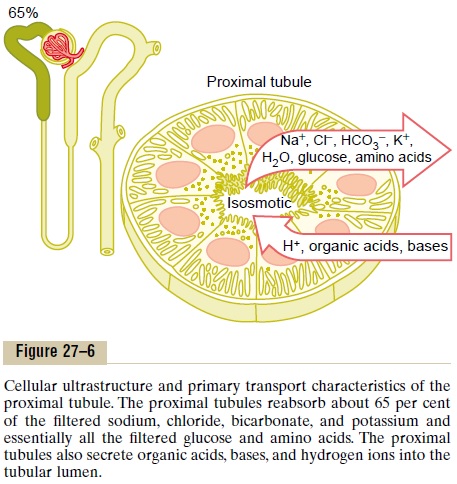 The extensive membrane surface of the epithelial brush border is also loaded with protein carrier mole-cules that transport a large fraction of the sodium ions across the luminal membrane linked by way of the co-transport mechanism with multiple organic nutrientssuch as amino acids and glucose. The remainder of the sodium is transported from the tubular lumen into the cell by counter-transport mechanisms, which reabsorb sodium while secreting other substances into the tubular lumen, especially hydrogen ions. As discussed, the secretion of hydrogen ions into the tubular lumen is an important step in the removal of bicarbonate ions from the tubule (by combining H+ with the HCO3_ to form H2CO3, which then dissociates into H2O and CO2).

Although the sodium-potassium ATPase pump pro-vides the major force for reabsorption of sodium, chloride, and water throughout the proximal tubule, there are some differences in the mechanisms by which sodium and chloride are transported through the luminal side of the early and late portions of the proximal tubular membrane. 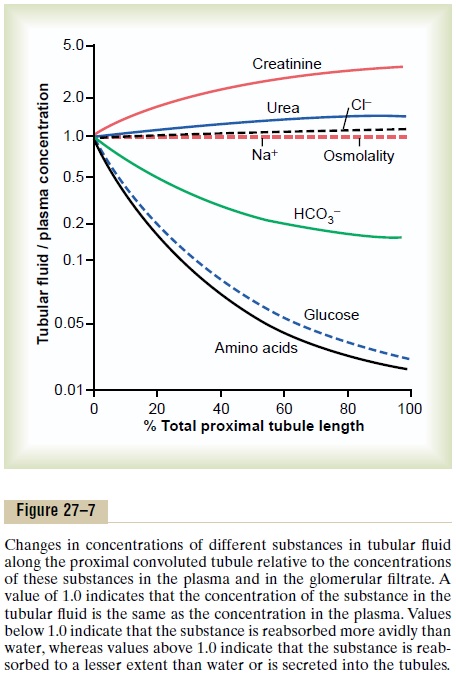 Secretion of Organic Acids and Bases by the Proximal Tubule.

In addition to the waste products of metabolism, the kidneys secrete many potentially harmful drugs or toxins directly through the tubular cells into the tubules and rapidly clear these substances from the blood. In the case of certain drugs, such as penicillin and salicylates, the rapid clearance by the kidneys creates a problem in maintaining a therapeutically effective drug concentration.

Another compound that is rapidly secreted by the proximal tubule is para-aminohippuric acid (PAH). PAH is secreted so rapidly that the average person can clear about 90 per cent of the PAH from the plasma flowing through the kidneys and excrete it in the urine. For this reason, the rate of PAH clearance can be used to estimate the renal plasma flow, as dis-cussed later.