One of the most basic mechanisms for controlling tubular reabsorption is the intrinsic ability of the tubules to increase their reabsorption rate in response to increased tubular load (increased tubular inflow). This phenomenon is referred to as glomerulotubularbalance. For example, if GFR is increased from 125 ml/min to 150 ml/min, the absolute rate of proximal tubular reabsorption also increases from about 81 ml/ min (65 per cent of GFR) to about 97.5 ml/min (65 per cent of GFR). Thus, glomerulotubular balance refers to the fact that the total rate of reabsorption increases as the filtered load increases, even though the percentage of GFR reabsorbed in the proximal tubule remains relatively constant at about 65 per cent.

Some degree of glomerulotubular balance also occurs in other tubular segments, especially the loop of Henle. The precise mechanisms responsible for this are not fully understood but may be due partly to changes in physical forces in the tubule and surround-ing renal interstitium, as discussed later. It is clear that the mechanisms for glomerulotubular balance can occur independently of hormones and can be demon-strated in completely isolated kidneys or even in com-pletely isolated proximal tubular segments.

The importance of glomerulotubular balance is that it helps to prevent overloading of the distal tubular segments when GFR increases. Glomerulotubular balance acts as a second line of defense to buffer the effects of spontaneous changes in GFR on urine output. (The first line of defense, discussed earlier, includes the renal autoregulatory mechanisms, espe-cially tubuloglomerular feedback, which help prevent changes in GFR.) Working together, the autoregula-tory and glomerulotubular balance mechanisms prevent large changes in fluid flow in the distal tubules when the arterial pressure changes or when there are other disturbances that would otherwise wreak havoc with the maintenance of sodium and volume homeostasis.

Normal Values for Physical Forces and Reabsorption Rate. Asthe glomerular filtrate passes through the renal tubules, more than 99 per cent of the water and most of the solutes are normally reabsorbed. Fluid and elec-trolytes are reabsorbed from the tubules into the renal interstitium and from there into the peritubular capil-laries. The normal rate of peritubular capillary reab-sorption is about 124 ml/min.

Reabsorption across the peritubular capillaries can be calculated as 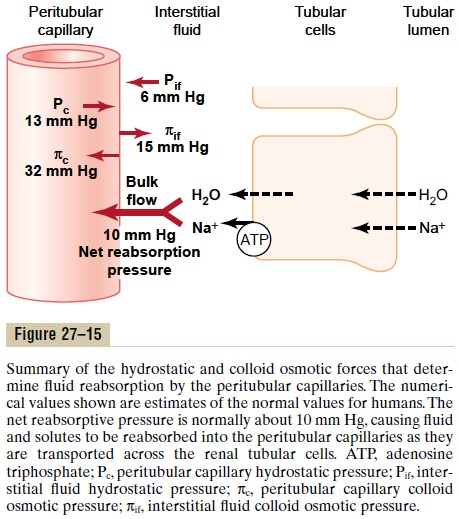 The other factor that contributes to the high rate of fluid reabsorption in the peritubular capillaries is a large filtration coefficient (Kf) because of the high hydraulic conductivity and large surface area of the capillaries. Because the reabsorption rate is normally about 124 ml/min and net reabsorption pressure is 10 mm Hg, Kf normally is about 12.4 ml/min/mm Hg. 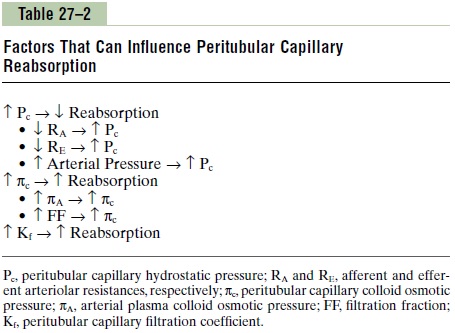 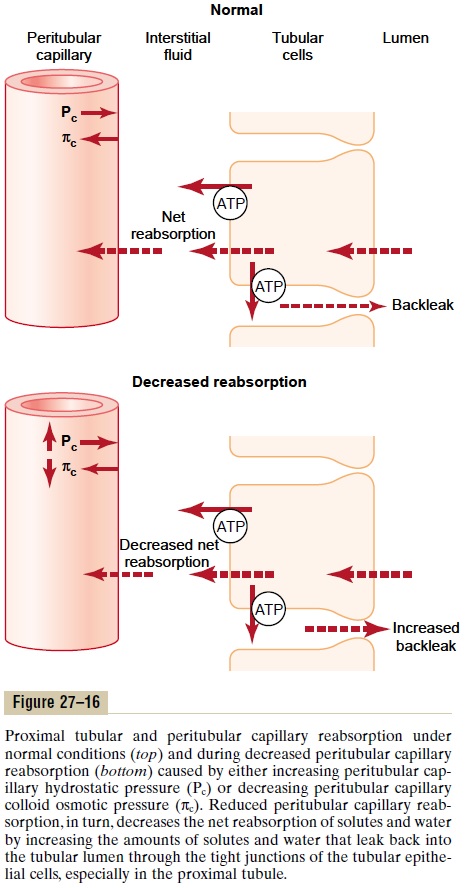 The mechanisms by which changes in interstitial fluid hydrostatic and colloid osmotic pressures influ-ence tubular reabsorption can be understood by exam-ining the pathways through which solute and water are reabsorbed (Figure 27–16). Once the solutes enter the intercellular channels or renal interstitium by active transport or passive diffusion, water is drawn from the tubular lumen into the interstitium by osmosis. And once the water and solutes are in the interstitial spaces, they can either be swept up into the peritubular cap-illaries or diffuse back through the epithelial junctions into the tubular lumen. The so-called tight junctions between the epithelial cells of the proximal tubule are actually leaky, so that considerable amounts of sodium can diffuse in both directions through these junctions. With the normal high rate of peritubular capillary reabsorption, the net movement of water and solutes is into the peritubular capillaries with little backleak into the lumen of the tubule. However, when peri-tubular capillary reabsorption is reduced, there is increased interstitial fluid hydrostatic pressure and a tendency for greater amounts of solute and water to backleak into the tubular lumen, thereby reducing the rate of net reabsorption (refer again to Figure 27–16).

The opposite is true when there is increased peri-tubular capillary reabsorption above the normal level. An initial increase in reabsorption by the peritubular capillaries tends to reduce interstitial fluid hydrostatic pressure and raise interstitial fluid colloid osmotic pressure. Both of these forces favor movement of fluid and solutes out of the tubular lumen and into the inter-stitium; therefore, backleak of water and solutes into the tubular lumen is reduced, and net tubular reab-sorption increases.

A second effect of increased renal arterial pressure that raises urine output is that it decreases the per-centage of the filtered load of sodium and water that is reabsorbed by the tubules. The mechanisms respon-sible for this effect include a slight increase in peri-tubular capillary hydrostatic pressure, especially in the vasa recta of the renal medulla, and a subsequent increase in the renal interstitial fluid hydrostatic pres-sure. As discussed earlier, an increase in the renal interstitial fluid hydrostatic pressure enhances back-leak of sodium into the tubular lumen, thereby reduc-ing the net reabsorption of sodium and water and further increasing the rate of urine output when renal arterial pressure rises.

Precise regulation of body fluid volumes and solute concentrations requires the kidneys to excrete differ-ent solutes and water at variable rates, sometimes independently of one another. For example, when potassium intake is increased, the kidneys must excrete more potassium while maintaining normal excretion of sodium and other electrolytes. Likewise, when sodium intake is changed, the kidneys must appropriately adjust urinary sodium excretion without major changes in excretion of other electrolytes. Several hormones in the body provide this specificity of tubular reabsorption for different electrolytes and water. Table 27–3 summarizes some of the most impor-tant hormones for regulating tubular reabsorption, their principal sites of action on the renal tubule, and their effects on solute and water excretion. Some of these hormones are discussed in more detail, but we briefly review their renal tubular actions in the next few paragraphs.

Aldosterone Increases Sodium Reabsorption and Increases Potassium Secretion. Aldosterone, secreted by the zonaglomerulosa cells of the adrenal cortex, is an impor-tant regulator of sodium reabsorption and potassium secretion by the renal tubules. The primary siteof aldosterone action is on the principal cells of the cortical collecting tubule. The mechanism by whichaldosterone increases sodium reabsorption while at the same time increasing potassium secretion is by stimulating the sodium-potassium ATPase pump on the basolateral side of the cortical collecting tubule membrane. Aldosterone also increases the sodium permeability of the luminal side of the membrane.

In the absence of aldosterone, as occurs with adrenal destruction or malfunction (Addison’s disease), there is marked loss of sodium from the body and accumu-lation of potassium. Conversely, excess aldosterone secretion, as occurs in patients with adrenal tumors (Conn’s syndrome) is associated with sodium retention and potassium depletion. Although day-to-day regula-tion of sodium balance can be maintained as long as minimal levels of aldosterone are present, the inabil-ity to appropriately adjust aldosterone secretion greatly impairs the regulation of renal potassium excretion and potassium concentration of the body fluids. Thus, aldosterone is even more important as a regulator of potassium concentration than it is for sodium concentration.

Angiotensin II is perhaps the body’s most powerful sodium-retaining hormone. As discussed, angiotensin II formation increases in circumstances associated with low blood pressure and/or low extra-cellular fluid volume, such as during hemorrhage or loss of salt and water from the body fluids. The increased formation of angiotensin II helps to return blood pressure and extracellular volume toward normal by increasing sodium and water reabsorption from the renal tubules through three main effects:

3.     Angiotensin II directly stimulates sodium reabsorption in the proximal tubules, the loops of Henle, the distal tubules, and the collecting tubules.One of the direct effects of angiotensin II is to stimulate the sodium-potassium ATPase pump on the tubular epithelial cell basolateral membrane. A second effect is to stimulate sodium-hydrogen exchange in the luminal membrane, especially in the proximal tubule. Thus, angiotensin II stimulates sodium transport across both the luminal and the basolateral surfaces of the epithelial cell membrane in the tubules.

ADH Increases Water Reabsorption. The most importantrenal action of ADH is to increase the water perme-ability of the distal tubule, collecting tubule, and col-lecting duct epithelia. This effect helps the body to conserve water in circumstances such as dehydration. In the absence of ADH, the permeability of the distal tubules and collecting ducts to water is low, causing the kidneys to excrete large amounts of dilute urine. Thus, the actions of ADH play a key role in controlling the degree of dilution or concentration of the urine.

ADH binds to specific V2receptors in the late distal tubules, collecting tubules, and collecting ducts, increasing the formation of cyclic AMP and activating protein kinases. This, in turn, stimulates the movement of an intracellular protein, called aquaporin-2 (AQP-2), to the luminal side of the cell membranes. The mol-ecules of AQP-2 cluster together and fuse with the cell membrane by exocytosis to formwater channels that permit rapid diffusion of water through the cells. There are other aquaporins, AQP-3 and AQP-4, in the baso-lateral side of the cell membrane that provide a path for water to rapidly exit the cells, although these are not believed to be regulated by ADH. Chronic increases in ADH levels also increase the formation of AQP-2 protein in the renal tubular cells by stimulat-ing AQP-2 gene transcription. When the concentration of ADH decreases, the molecules of AQP-2 are shut-tled back to the cell cytoplasm, thereby removing the water channels from the luminal membrane and reducing water permeability.

Atrial Natriuretic Peptide Decreases Sodium and Water Reabsorption. Specific cells of the cardiac atria, when distended because of plasma volume expansion, secrete a peptide called atrial natriuretic peptide. Increased levels of this peptide in turn inhibit the reab-sorption of sodium and water by the renal tubules, especially in the collecting ducts. This decreased sodium and water reabsorption increases urinary excretion, which helps to return blood volume back toward normal.

Parathyroid hormone is one of the most important calcium-regulating hormones in the body. Its principal action in the kidneys is to increase tubular reabsorp-tion of calcium, especially in the distal tubules and perhaps also in the loops of Henle. Parathyroid hormone also has other actions, including inhibition of phosphate reabsorption by the proximal tubule and stimulation of magnesium reabsorption by the loop of Henle.

Activation of the sympathetic nervous system can decrease sodium and water excretion by constricting the renal arterioles, thereby reducing GFR. Sympa-thetic activation also increases sodium reabsorption in the proximal tubule, the thick ascending limb of the loop of Henle, and perhaps in more distal parts of the renal tubule. And finally, sympathetic nervous system stimulation increases renin release and angiotensin II formation, which adds to the overall effect to increase tubular reabsorption and decrease renal excretion of sodium.