Active transport can move a solute against an elec-trochemical gradient and requires energy derived from metabolism.

Active transport can move a solute against an elec-trochemical gradient and requires energy derived from metabolism. Transport that is coupled directly to an energy source, such as the hydrolysis of adenosine triphosphate (ATP), is termed primary active trans-port. A good example of this is the sodium-potassium ATPase pump that functions throughout most parts of the renal tubule. Transport that is coupledindirectly to an energy source, such as that due to an ion gradient, is referred to as secondary active transport. Reabsorp-tion of glucose by the renal tubule is an example of secondary active transport. Although solutes can be reabsorbed by active and/or passive mechanisms by the tubule, water is always reabsorbed by a passive (nonactive) physical mechanism called osmosis, which means water diffusion from a region of low solute con-centration (high water concentration) to one of high solute concentration (low water concentration).

Solutes Can Be Transported Through Epithelial Cells or Between Cells. Renal tubular cells, like other epithelial cells, areheld together by tight junctions. Lateral intercellular spaces lie behind the tight junctions and separate the epithelial cells of the tubule. Solutes can be reabsorbed or secreted across the cells by way of the transcellularpathway or between the cells by moving across thetight junctions and intercellular spaces by way of the paracellular pathway. Sodium is a substance that moves through both routes, although most of the sodium is transported through the transcellular pathway. In some nephron segments, especially the proximal tubule, water is also reabsorbed across the paracellular pathway, and substances dissolved in the water, especially potassium, magnesium, and chlo-ride ions, are carried with the reabsorbed fluid between the cells.

Primary Active Transport Through the Tubular Membrane Is Linked to Hydrolysis of ATP.The special importance ofprimary active transport is that it can move solutes against an electrochemical gradient. The energy for thisactive transport comes from the hydrolysis of ATP by way of membrane-bound ATPase; the ATPase is also a component of the carrier mechanism that binds and moves solutes across the cell membranes. The primary active transporters that are known include sodium-potassium ATPase, hydrogen ATPase, hydrogen-potassium ATPase, and calcium ATPase. 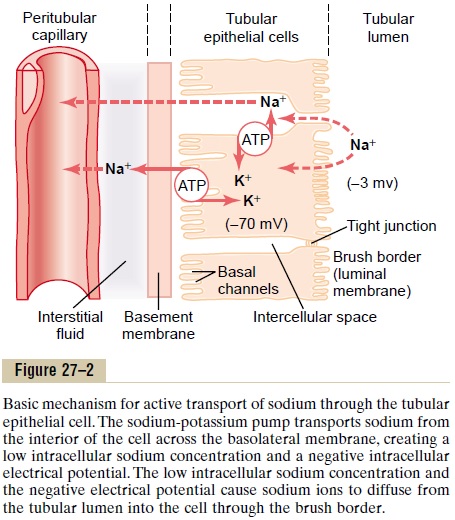 A good example of a primary active transport system is the reabsorption of sodium ions across the proximal tubular membrane, as shown in Figure 27–2. On the basolateral sides of the tubular epithelial cell, the cell membrane has an extensive sodium-potassium ATPase system that hydrolyzes ATP and uses the released energy to transport sodium ions out of the cell into the interstitium. At the same time, potassium is transported from the interstitium to the inside of the cell. The operation of this ion pump maintains low intracellular sodium and high intracellular potassium concentrations and creates a net negative charge of about -70 millivolts within the cell. This pumping of sodium out of the cell across the basolateral membrane of the cell favors passive diffusion of sodium across the luminal membrane of the cell, from the tubular lumeninto the cell, for two reasons: (1) There is a concen-tration gradient favoring sodium diffusion into the cell because intracellular sodium concentration is low (12 mEq/L) and tubular fluid sodium concentration is high (140 mEq/L). (2) The negative, -70-millivolt, intracellular potential attracts the positive sodium ions from the tubular lumen into the cell.

Active reabsorption of sodium by sodium-potassium ATPase occurs in most parts of the tubule. In certain parts of the nephron, there are additional provisions for moving large amounts of sodium into the cell. In the proximal tubule, there is an extensive brush border on the luminal side of the membrane (the side that faces the tubular lumen) that multiplies the surface area about 20-fold.

There are also sodium carrier proteins that bind sodium ions on the luminal surface of the membrane and release them inside the cell, providing facilitated diffusion of sodium through the membrane into the cell. These sodium carrier pro-teins are also important for secondary active transport of other substances, such as glucose and amino acids, as discussed later.

Thus, the net reabsorption of sodium ions from the tubular lumen back into the blood involves at least three steps:

1.     Sodium diffuses across the luminal membrane (also called the apical membrane) into the cell down an electrochemical gradient established by the sodium-potassium ATPase pump on the basolateral side of the membrane.

2.     Sodium is transported across the basolateral membrane against an electrochemical gradient by the sodium-potassium ATPase pump.

3.     Sodium, water, and other substances are reabsorbed from the interstitial fluid into the peritubular capillaries by ultrafiltration, a passive process driven by the hydrostatic and colloid osmotic pressure gradients.

Thus, secondary active transport does not require energy directly from ATP or from other high-energy phosphate sources. Rather, the direct source of the energy is that liberated by the simultaneous facil-itated diffusion of another transported substance down its own electrochemical gradient. 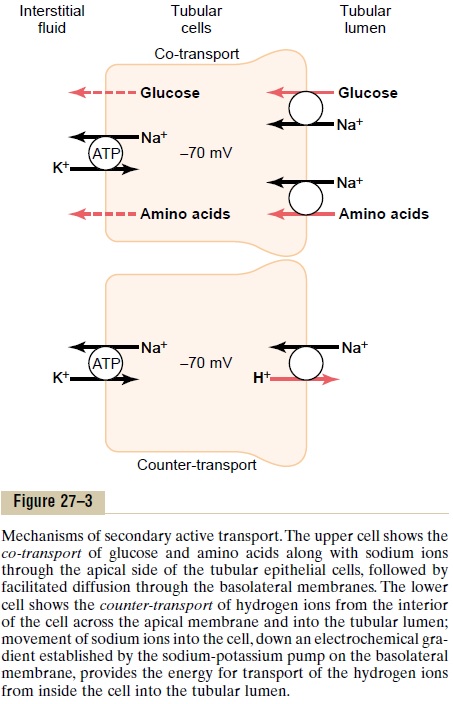 Although transport of glucose against a chemical gradient does not directly use ATP, the reabsorption of glucose depends on energy expended by the primary active sodium-potassium ATPase pump in the basolateral membrane. Because of the activity of this pump, an electrochemical gradient for facilitated diffusion of sodium across the luminal membrane is maintained, and it is this downhill diffusion of sodium to the interior of the cell that provides the energy for the simultaneous uphill transport of glucose across the luminal membrane. Thus, this reabsorption of glucose is referred to as “secondary active transport” because glucose itself is reabsorbed uphill against a chemical gradient, but it is “secondary” to primary active trans-port of sodium.

Secondary Active Secretion into the Tubules. Some sub-stances are secreted into the tubules by secondary active transport. This often involves counter-transport of the substance with sodium ions. In counter-transport, the energy liberated from the downhill movement of one of the substances (for example, sodium ions) enables uphill movement of a second substance in the opposite direction.

One example of counter-transport, shown in Figure 27–3, is the active secretion of hydrogen ions coupled to sodium reabsorption in the luminal membrane of the proximal tubule. In this case, sodium entry into the cell is coupled with hydrogen extrusion from the cell by sodium-hydrogen counter-transport. This transport is mediated by a specific protein in the brush border of the luminal membrane. As sodium is carried to the interior of the cell, hydrogen ions are forced outward in the opposite direction into the tubular lumen.

Pinocytosis—An Active Transport Mechanism for Reabsorption of Proteins. Some parts of the tubule, especially theproximal tubule, reabsorb large molecules such as proteins by pinocytosis. In this process, the protein attaches to the brush border of the luminal membrane, and this portion of the membrane then invaginates to the interior of the cell until it is completely pinched off and a vesicle is formed containing the protein. Once inside the cell, the protein is digested into its con-stituent amino acids, which are reabsorbed through the basolateral membrane into the interstitial fluid. Because pinocytosis requires energy, it is considered a form of active transport.

Transport Maximum for Substances That Are Actively Reab- sorbed. For most substances that are actively reab-sorbed or secreted, there is a limit to the rate at which the solute can be transported, often referred to as thetransport maximum. This limit is due to saturationof the specific transport systems involved when the amount of solute delivered to the tubule (referred to as tubular load) exceeds the capacity of the carrier proteins and specific enzymes involved in the trans-port process.

In the adult human, the transport maximum for glucose averages about 375 mg/min, whereas the fil-tered load of glucose is only about 125 mg/min (GFR x plasma glucose = 125 ml/min x 1 mg/ml). With large increases in GFR and/or plasma glucose concentration that increase the filtered load of glucose above 375 mg/ min, the excess glucose filtered is not reabsorbed and passes into the urine. 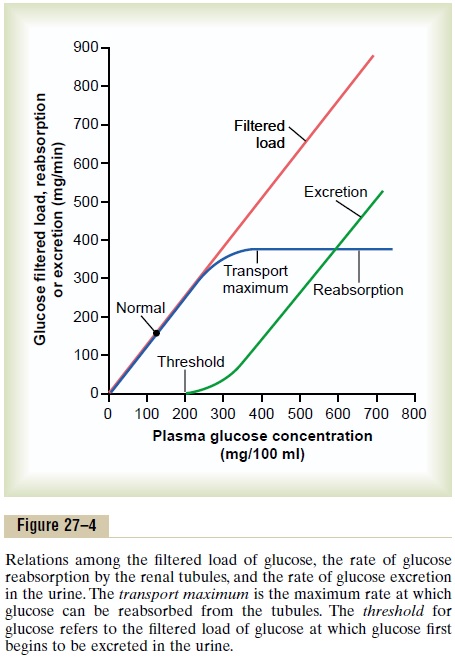 The overall transport maximum for the kidneys, which is normally about 375 mg/min, is reached when all nephrons have reached their maximal capacity to reab-sorb glucose.

The plasma glucose of a healthy person almost never becomes high enough to cause excretion of glucose in the urine, even after eating a meal. However, in uncontrolled diabetes mellitus, plasma glucose may rise to high levels, causing the filtered load of glucose to exceed the transport maximum and resulting in urinary glucose excretion. Some of the important transport maximums for substancesactivelyreabsorbed by the tubules are as follows: 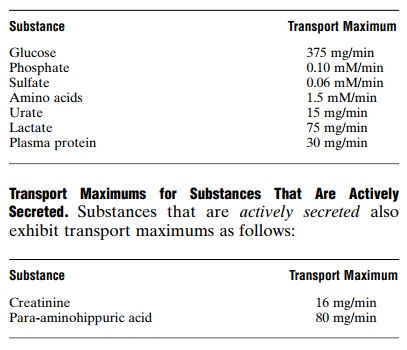 Substances That Are Actively Transported but Do Not Exhibit a Transport Maximum. The reason that actively trans-ported solutes often exhibit a transport maximum is that the transport carrier system becomes saturated as the tubular load increases. Substances that are passivelyreabsorbed do not demonstrate a transport maximum because their rate of transport is determined by other factors, such as (1) the electrochemical gradient for diffusion of the substance across the membrane, (2) the permeability of the membrane for the substance, and (3) the time that the fluid containing the substance remains within the tubule. Transport of this type is referred to as gradient-time transport because the rate of transport depends on the electrochemical gradient and the time that the substance is in the tubule, which in turn depends on the tubular flow rate.

In the more distal parts of the nephron, the epithe-lial cells have much tighter junctions and transport much smaller amounts of sodium. In these segments, sodium reabsorption exhibits a transport maximum similar to that for other actively transported substances. Furthermore, this transport maximum can be increased in response to certain hormones, such as aldosterone.