Soaps and the Detergents are materials that are used by us for cleaning purposes because pure water alone cannot remove all types of dirt or any oily substance from our body or clothes.

Soaps and the Detergents are materials that are used by us for cleaning purposes because pure water alone cannot remove all types of dirt or any oily substance from our body or clothes. They contain ‘surfactants’, which are compounds with molecules that line up around water to break the ‘surface tension’. Both of them having a different chemical nature. Soap is a cleaning agent that is composed of one or more salts of fatty acids. Detergent is a chemical compound or a mixture of chemical compounds, which is used as a cleaning agent, also. They perform their cleaning actions in certain specific conditions. You will learn more about this in detail, in the following units.

Soaps are sodium or potassium salts of some long chain carboxylic acids, called fatty ­acids. Soap requires two major raw materials: i) fat and ii) alkali. The alkali, most commonly used in the preparation of soap is sodium hydroxide­. Potassium hydroxide can also be used. A ­potassium-based soap creates a more water-­ soluble product than a sodium-based soap. Based on these features, there are two types of soaps:

Soaps, which are prepared by the saponification of oils or fats with caustic soda (sodium hydroxide), are known as hard soaps. They are usually used for washing purposes.

Soaps, which are prepared by the saponification of oils or fats with potassium salts, are known as soft soaps. They are used for cleansing the body.

This is the oldest method. But, it is still widely used in the small scale preparation of soap. There are mainly, two steps to be followed in this process.

i) Saponification of oil:

The oil, which is used in this process, is taken in an iron tank (kettle). The alkaline solution (10%) is added into the kettle, a little in excess. The mixture is boiled by passing steam through it. The oil gets hydrolysed after several hours of boiling. This process is called Saponification

ii) Salting out of soap:

Common salt is then added to the boiling mixture. Soap is finally precipitated in the tank. After several hours the soap rises to the top of the liquid as a ‘curdy mass’. The neat soap is taken off from the top. It is then allowed to cool down.

Effect of hard water on soap

Hard water contains calcium and magnesium ions (Ca2+ and Mg2+) that limit the cleaning action of soap. When combined with soap, hard water develops a thin layer (precipitates of the metal ions) called ‘scum’, which leaves a deposit on the clothes or skin and does not easily rinse away. Over time, this can lead to the deterioration of the fabric and eventually ruin the clothes. On the other hand, detergents are made with chemicals that are not affected by hard water.

Development of synthetic detergents is a big achievement in the field of cleansing.

These soaps possess the desirable properties of ordinary soaps and also can be used with hard water and in acidic solutions. These are salts of sulphonic acids or alkyl hydrogen sulphates in comparison to soap, which are salts of carboxylic acids. The detergents do not form precipitates with Ca2+ and Mg2+ present in hard water. So, the cleansing action of detergents is better than that of soaps.

Detergents are prepared by adding sulphuric acid to the processed hydrocarbon obtained from petroleum. This chemical reaction result in the formation of molecules similar to the fatty acid in soap. Then, an alkali is added to the mixture to produce the ‘surfactant molecules’, which do not bond with the minerals present in the hard water, thus preventing the formation of their precipitates.

In addition to a ‘surfactant’, the modern detergent contains several other ingredients. They are listed as follows:

i) Sodium silicate, which prevents the corrosion and ensures that the detergent does not damage the washing machine.

ii) Fluorescent whitening agents that give a glow to the clothes.

iii) Oxygen bleaches, such as ‘sodium perborate’, enable the removal of certain stains from the cloth.

iv) Sodium sulphate is added to prevent the caking of the detergent powder.

v) Enzymes are added to break down some stains caused by biological substances like blood and vegetable juice.

vi) Certain chemicals that give out a pleasant smell are also added to make the clothes fragrant after they are washed with detergents.

A soap molecule contains two chemically distinct parts that interact differently with water. It has one polar end, which is a short head with a carboxylate group (–COONa) and one non-polar end having the long tail made of the hydrocarbon chain.

Advantages of detergents over soaps

Detergents are better than soaps because they:

They have straight hydrocarbon chains, which can be easily degraded by bacteria. 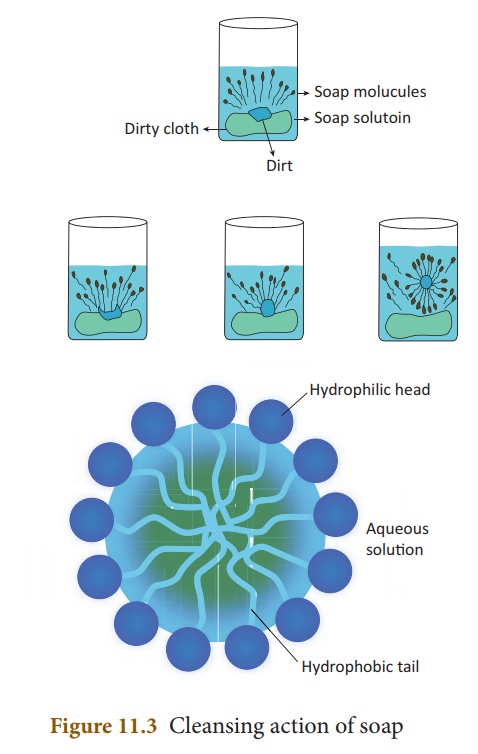 They have highly branched hydrocarbon chains, which cannot be degraded by bacteria.

1. Some detergents having a branched hydro-carbon chain are not fully biodegradable by micro-organisms present in water. So, they cause water pollution.

2. They are relatively more expensive than soap.

4. Comparison between soap and detergents