Classes of Organic Compounds (Based on the Kind of Atoms)

CLASSES OF ORGANIC COMPOUNDS (BASED ON THE KIND OF ATOMS)

(a) Alkanes: These are hydrocarbons, which contain only single bonds. They are represented by the general formula CnH2n + 2 (where n = 1,2, 3, ……). The simplest alkane (for n=1) is methane (CH4). Since, all are single bonds in alkanes, they are saturated compounds.

(b) Alkenes: The hydrocarbons, which contain one or more C=C bonds are called alkenes. These are unsaturated compounds. They are represented by the general formula CnH2n. The simplest alkene contains two carbon atoms (n=2) and is called ethylene (C2H4). 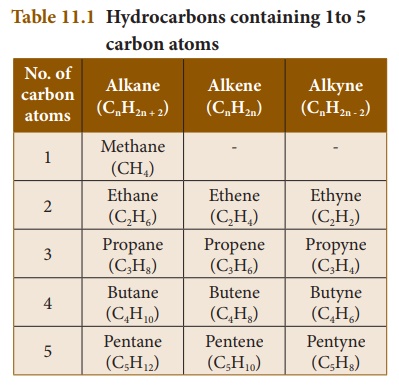 � They are colourless and odourless.

� The boiling point of hydrocarbons increases with an increase in the number of carbon atoms.

� They undergo combustion reaction with oxygen to form CO2 and water.

� Alkanes are least reactive when compared to other classes of hydrocarbons.

� Alkynes are the most reactive due to the presence of the triple bond.

� Alkanes are saturated whereas alkenes and alkynes are unsaturated.

� They are insoluble in water.

� Take the given sample solution in a test tube.

� Add a few drops of bromine water and observe any characteristic change in colour.

� If the given compound is unsaturated, it will decolourise bromine water.

� Saturated compounds do not decolourise bromine. 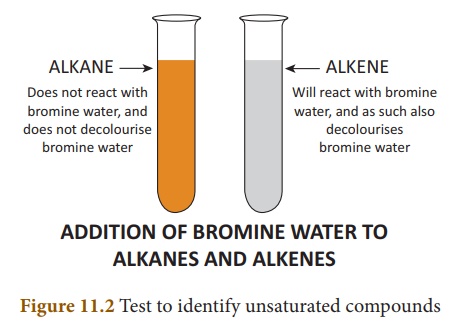 3. Classification of organic compounds based on functional groups

The structural frameworks of organic compounds are made of carbon and hydrogen, which are relatively less reactive. But, the presence of some other atoms or group of atoms makes the compounds more reactive and thus determines the chemical properties of the compound. These groups are called functional groups.

A functional group is an atom or group of atoms in a molecule, which gives its characteristic chemical properties.

The chemical properties of an organic compound depend on its functional group whereas its physical properties rely on remaining part of the structure. Carbon to carbon multiple bonds (C=C, C

For example, ethane is a hydrocarbon having molecular formula C2H6. If one of its hydrogen is replaced by –OH group, you will get an alcohol. Leaving the functional group, the rest of the structure is represented by ‘R’.

Thus an alcohol is represented by ‘R-OH’ 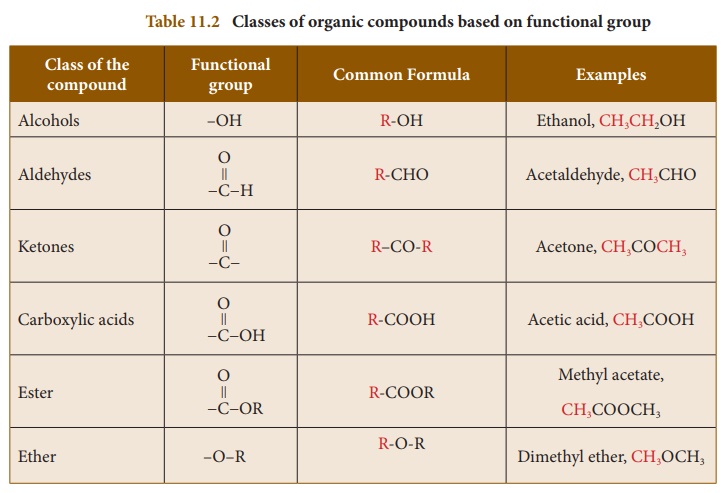