This is a basic information theoretic algorithm. A simple example will be used to illustrate the algorithm:

This is a basic information theoretic algorithm. A simple example will be used to illustrate the algorithm:

Encoding for the Shannon-Fano Algorithm:

1. Sort symbols according to their frequencies/probabilities, e.g., ABCDE.

2. Recursively divide into two parts, each with approx. same number of counts.

A Shannon–Fano tree is built according to a specification designed to define an effective code table. The actual algorithm is simple:

1.     For a given list of symbols, develop a corresponding list of probabilities or frequency counts so that each symbol‘s relative frequency of occurrence is known.

2.     Sort the lists of symbols according to frequency, with the most frequently occurring symbols at the left and the least common at the right.

3.     Divide the list into two parts, with the total frequency counts of the left part being as close to the total of the right as possible.

5.     Recursively apply the steps 3 and 4 to each of the two halves, subdividing groups and adding bits to the codes until each symbol has become a corresponding code leaf on the tree. 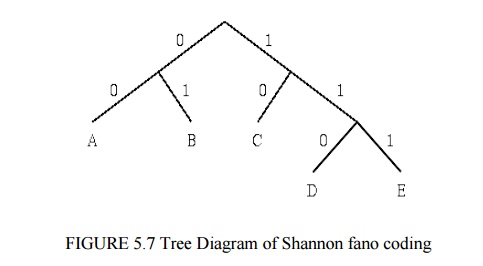