·        Transmission rate over a noisy channel

Capacity of a noisy channel

Ø   All these transition probabilities from xi to yj are gathered in a transition matrix.

Ø   The input of a DMC is a RV (random variable) X who selects its value from a discrete limited set X.

Ø   The cardinality of X is the number of the point in the used constellation.

Ø   In an ideal channel, the output is equal to the input.

Ø   In a non-ideal channel, the output can be different from the input with a given probability.

Ø   H(X) is the amount of information per symbol at the input of the channel.

Ø   H(Y ) is the amount of information per symbol at the output of the channel.

Ø   H(XjY ) is the amount of uncertainty remaining on X knowing Y .

Ø   For an ideal channel X = Y , there is no uncertainty over X when we observe Y . So all the information is transmitted for each channel use: I (X;Y ) = H(X)

Ø   If the channel is too noisy, X and Y are independent. So the uncertainty over X remains the same knowing or not Y , i.e. no information passes through the channel: I (X; Y ) = 0.

Ø   Normally the size of constellation at the input and at the output are the same, i.e., jXj = jYj

Ø   In this case the receiver employs hard-decision decoding.

Ø   It means that the decoder makes a decision about the transmitted symbol.

Ø   In this case the receiver employs a soft-decision.

3.     If the transmitted symbols are M-ary (for example, M levels), and at the receiver the output of the detector, which follows the demodulator, has an estimate of the transmitted data symbol with

(a). M levels, the same as that of the transmitted symbols, then we say the detector has made a hard decision;

(b). Q levels, Q being greater than M, then we say the detector has made a soft decision. 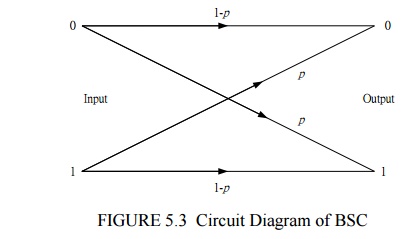 Note that if the channel noise and other interferences cause statistically independent errors in the transmitted binary sequence with average probability p, the channel is called a BSC. Besides, since each output bit from the channel depends only upon the corresponding input bit, the channel is also memoryless.

Such a channel is called discrete memory channel (DSC). 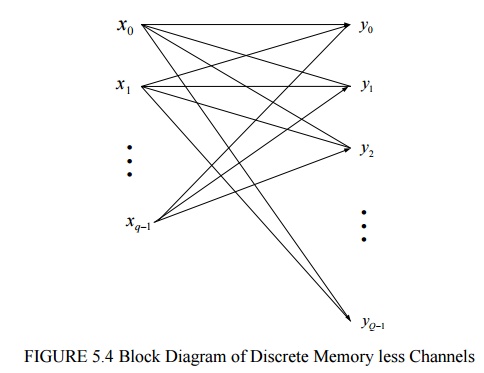 the probability transition matrix for the channel.

AWGN is the most important channel of this type.

If, further, the channel is memoryless, then the joint conditional pdf of the detector‘s output is

If such a channel has bandwidth W with ideal frequency response C ( f ) = 1 , and if the bandwidth-limited input signal to the channel is x ( t) , and the output signal, y ( t) of the channel is corrupted by AWGN, then

The channel can be described by a complete set of orthonormal functions:

Since { ni } are uncorrelated and are Gaussian, therefore, statistically independent. So

Suppose x j is transmitted,  yi is received, then

Hence, the average mutual information (AMI) provided by the output Y about the input X is

To maximize the AMI, we examine the above equation:

(3). P ( x j ) represents the probabilities of the input symbols, and we may do something or control them. Therefore, the channel capacity is defined by 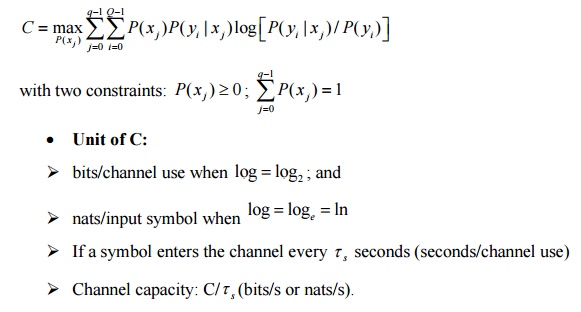