Sexual reproduction is the process in which two gametes (male and female) are fused to produce offspring of their own kind. In such cases both sexes, male and female sex organs are needed to produce gametes. You have already learnt that the flower is a reproductive organ of a flowering plant. To understand this further we need to study the structure of a flower.

1. Parts of a Typical Flower

A flower is a modified shoot with limited growth to carry out sexual reproduction. A flower consists of four whorls borne on a thalamus. These whorls are from outside

a) Calyx – consisting of sepals

b) Corolla – consisting of petals 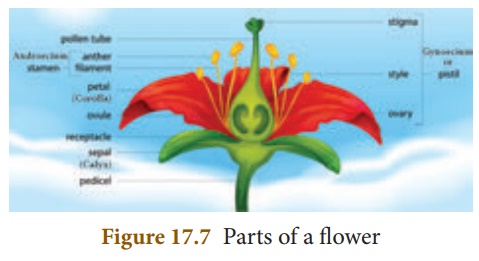 The two outermost whorls calyx and corolla are non–essential or accessory whorls as they do not directly take part in the reproduction. The other two whorls androecium and gynoecium are known as the essential whorls, because both take part directly in reproduction.

Androecium: Androecium, the male part of flower is composed of stamens. Each stamen consists of a stalk called the filament and a small bag like structure called anther at the tip. The pollen grains are produced in the anther within the pollen sac. 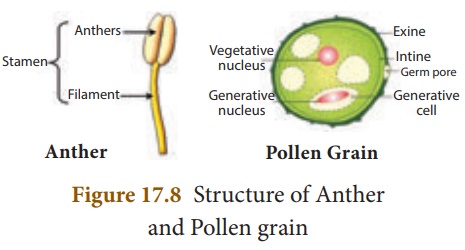 Pollen grain: Pollen grains are usually spherical in shape. It has two layered wall. The hard-outer layer is known as exine. It has prominent apertures called germpore. The inner thin layer is known as intine. It is a thin and continuous layer made up of cellulose and pectin. Mature pollen grains contain two cells, the vegetative and the generative cell. Vegetative cell contains a large nucleus. The generative cell divides mitotically to form two male gametes.

Gynoecium: Gynoecium is the female part of the flower and is made up of carpels. It has three parts:

The ovary contains the ovules.

2. Structure of the Ovule

The main part of the ovule is the nucellus which is enclosed by two integuments leaving an opening called as micropyle. The ovule is attached to the ovary wall by a stalk known as funiculus. Chalaza is the basal part. 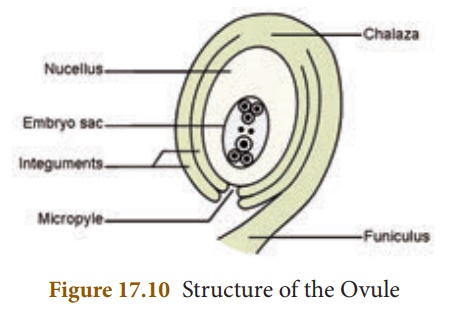 The embryo sac contains seven cells and the eighth nuclei located within the nucellus. Three cells at the micropylar end form the egg apparatus and the three cells at the chalaza end are the antipodal cells. The remaining two nuclei are called polar nuclei found in the centre. In the egg apparatus one is the egg cell (female gamete) and the remaining two cells are the synergids.

Process of sexual reproduction in flowering plants. It involves: