Organs of the reproductive system are divided into primary and secondary (accessory) sex organs. Primary reproductive organs include the gonads (Testes in male and Ovaries in female).

·                 Organs of the reproductive system are divided into primary and secondary (accessory) sex organs. Primary reproductive organs include the gonads (Testes in male and Ovaries in female).

Now let’s see the cells of the primary reproductive organs in human male and female and their role in reproduction.

Testes are the reproductive glands of the male that are oval shaped organs which lie outside the abdominal cavity of a man in a sac like structure called scrotum. Now we shall study the various cells which are present in the testes.

Each testes is covered with a layer of fibrous tissue called tunica albuginea. Many septa from this layer divide the testes into pyramidal lobules, in which lie seminiferous tubules, cells of Sertoli, and the Leydig cells (interstitial cells). 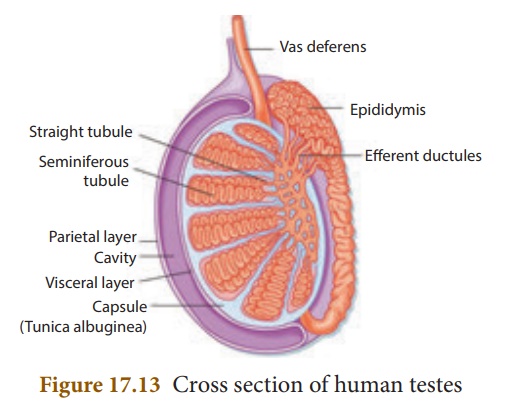 The ovaries are located on either side of the lower abdomen composed of two almond shaped bodies, each lying near the lateral end of fallopian tube. Each ovary is a compact structure consisting of an outer cortex and an inner medulla. The cortex is composed of a network of connective tissue called as stroma and is lined by the germinal epithelium. The epithelial cells called the granulosa cells surround each ovum in the ovary together forming the primary follicle. As the egg grows larger, the follicle also enlarges and gets filled with the fluid and is called the Graafian follicle. 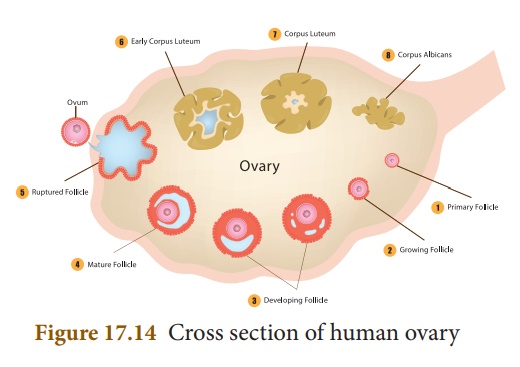