The spermatozoan consists of head, a middle piece and tail. The sperm head is elongated and formed by the condensation of nucleus. The anterior portion has a cap like structure called acrosome. 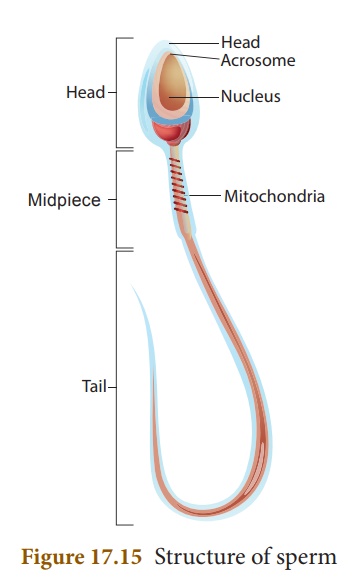 It contains hyaluronidase an enzyme that helps the sperm to enter the ovum during fertilization. A short neck connects the head and middle piece which comprises the centrioles.The middle piece contains the mitochondria which provides energy for the movement of tail. It brings about sperm motility which is essential for fertilization.

The mature ovum or egg is spherical in shape.The ovum is almost free of yolk. It contains abundant cytoplasm and the nucleus. The ovum is surrounded by three membranes. The plasma membrane is surrounded by inner thin zona pellucida and an outer thick corona radiata. The corona radiata is formed of follicle cells. The membrane forming the surface layer of the ovum is called vitelline membrane. The fluid-filled space between zona pellucida and the surface of the egg is called perivitelline space. 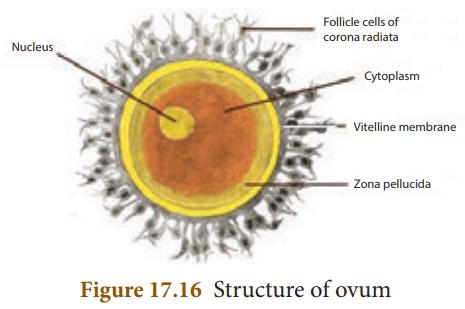 The reproductive system in both males and females becomes functional and an increase in sex hormone production resulting in puberty. This phenomenon tends to start earlier in females than in males. Generally boys attain puberty between the age of 13 to 14 years, while girls reach puberty between 11 to 13 years. In male, the onset of puberty is triggered by the secretion of the hormone testosterone in the testes, in female the secretion of estrogens and progesterone from the ovary. The secretion of both male and female hormones are under the control of the pituitary gonadotropins luteinizing hormone (LH) and follicle stimulating hormone (FSH).