Fertilization in human is internal and occurs in the oviduct of the female genital tract. It takes place usually in the ampulla of the fallopian tube.

Fertilization in human is internal and occurs in the oviduct of the female genital tract. It takes place usually in the ampulla of the fallopian tube. An oocyte is alive for about 24 hours after it is released from the follicle. Fertilisation must take place within 24 hours. The sperm enters into the ovum and fuses with it, resulting in the formation of a ‘zygote’. This process is called fertilization. The zygote is a fertilized ovum.

Cleavage and Formation of Blastula

The first cleavage takes place about 30 hours after fertilization. Cleavage is a series of rapid mitotic divisions of the zygote to form many celled blastula (Blastocyst) which comprises an outer layer of smaller cells and inner mass of larger cells.

The transformation of blastula into gastrula and the formation of primary germ layers (ectoderm, mesoderm and endoderm) by rearrangement of the cells is called gastrulation. This takes place after the process of implantation. 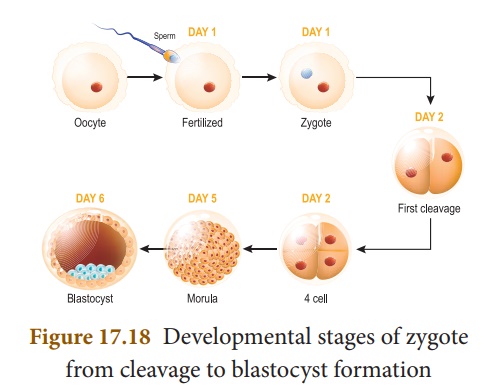 The establishment of the germ layers namely ectoderm, mesoderm and endoderm initiates the final phase of embryonic development. During organogenesis the various organs of the foetus are established from the different germ layers attaining a functional state.

The placenta is a disc shaped structure attached to the uterine wall and is a temporary association between the developing embryo and maternal tissues. It allows the exchange of food materials, diffusion of oxygen, excretion of nitrogenous wastes and elimination of carbon dioxide. A cord containing blood vessels that connects the placenta with the foetus is called the umbilical cord.

It is the time period during which the embryo attains its development in the uterus. Normally gestation period of human last for about 280 days. During pregnancy the uterus expands upto 500 times of its normal size.

Parturition is the expulsion of young one from the mother’s uterus at the end of gestation. Oxytocin from the posterior pituitary stimulates the uterine contractions and provides force to expel the baby from the uterus, causing birth.

The ejection of milk is stimulated by posterior pituitary hormone oxytocin.