Septic shock is the most common type of circulatory shock and is caused by widespread infection.

Septic shock is the most common type of circulatory shock and is caused by widespread infection (Chart 15-5). Despite the in-creased sophistication of antibiotic therapy, the incidence of sep-tic shock has continued to rise during the past 60 years. It is the most common cause of death in noncoronary intensive care units in the United States and the 13th leading cause of death in the U.S. population (Balk, 2000a). Elderly patients are at particular risk for sepsis because of decreased physiologic reserves and an aging immune system (Balk, 2000a; Vincent & Ferreira, 2000). 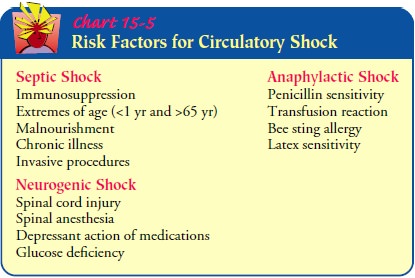 Nosocomial infections (infections occurring in the hospital) in critically ill patients most frequently originate in the blood-stream, lungs, and urinary tract (in decreasing order of frequency) (Richards, Edwards, Culver et al., 1999). The source of infection is an important determinant of the clinical outcome. The great-est risk of sepsis occurs in patients with bacteremia (bloodstream) and pneumonia (Simon & Trenholme, 2000). Other infections that may progress to septic shock include intra-abdominal infec-tions, wound infections, bacteremia associated with intravascular catheters (Eggimann & Pittet, 2001), and indwelling urinary catheters.

When a microorganism invades body tissues, the patient ex-hibits an immune response. This immune response provokes the activation of biochemical mediators associated with an inflam-matory response and produces a variety of effects leading to shock. Increased capillary permeability, which leads to fluid seep-ing from the capillaries, and vasodilation are two such effects that interrupt the ability of the body to provide adequate perfusion, oxygen, and nutrients to the tissues and cells.

Septic shock typically occurs in two phases. The first phase, referred to as the hyperdynamic, progressive phase, is character-ized by a high cardiac output with systemic vasodilation. The blood pressure may remain within normal limits. The heart rate increases, progressing to tachycardia. The patient becomes hyper-thermic and febrile, with warm, flushed skin and bounding pulses. The respiratory rate is elevated. Urinary output may remain at normal levels or decrease. Gastrointestinal status may be compro-mised as evidenced by nausea, vomiting, diarrhea, or decreased bowel sounds. The patient may exhibit subtle changes in mental status, such as confusion or agitation.

The later phase, referred to as the hypodynamic, irreversible phase, is characterized by low cardiac output with vasoconstriction, reflecting the body’s effort to compensate for the hypovolemia caused by the loss of intravascular volume through the capillaries. In this phase, the blood pressure drops and the skin is cool and pale. Temperature may be normal or below normal. Heart and res-piratory rates remain rapid. The patient no longer produces urine, and multiple organ dysfunction progressing to failure develops.

Systemic inflammatory response syndrome (SIRS) presents clinically like sepsis. The only difference between SIRS and sep-sis is that there is no identifiable source of infection. SIRS stim-ulates an overwhelming inflammatory immunologic and hormonal response, similar to that seen in septic patients. Despite an absence of infection, antibiotic agents may still be adminis-tered because of the possibility of unrecognized infection. Addi-tional therapies directed to the support of the patient with SIRS are similar to those for sepsis. If the inflammatory process pro-gresses, septic shock may develop.

Any potential routes of infection must be eliminated. Intra-venous lines are removed and reinserted at other body sites. Antibiotic-coated intravenous central lines may be placed to de-crease the risk of invasive line-related bacteremia in high-risk pa-tients, such as the elderly (Eggimann & Pittet, 2001). If possible, urinary catheters are removed. Any abscesses are drained and necrotic areas débrided.

Fluid replacement must be instituted to correct the hypo-volemia that results from the incompetent vasculature and in-flammatory response. Crystalloids, colloids, and blood products may be administered to increase the intravascular volume.

If the infecting organism is unknown, broad-spectrum antibiotic agents are started until culture and sensitivity reports are received (Simon & Trenholme, 2000). A third-generation cephalosporinplus an aminoglycoside may be prescribed initially. This combi-nation works against most gram-negative and some gram-positive organisms. When culture and sensitivity reports are available, the antibiotic agent may be changed to one that is more specific to the infecting organism and less toxic to the patient.

Research efforts show promise for improving the outcomes of septic shock. Although past treatments focused on destroying the infectious organism, emphasis is now on altering the patient’s im-mune response to the organism. The cell walls of gram-negative bacteria contain a lipopolysaccharide, an endotoxin released dur-ing phagocytosis (Abraham et al., 2001). Endotoxin and/or gram-positive cell wall products interact with inflammatory bio-chemical mediators, initiating an intense inflammatory response and systemic effects that lead to shock. Current research focuses on the development of medications that will inhibit or modulate the effects of biochemical mediators, such as endotoxin and pro-calcitonin (Bernard, Vincent, Laterre, et al., 2001). The focus on immunotherapy in treating septic shock is expected to shed light on how the cellular response to infection leads to shock.

Recombinant human activated protein C (APC), or drotreco-gin alfa (Xigris), has recently been demonstrated to reduce mor-tality in patients with severe sepsis (Bernard, Artigas, Dellinger et al., 2001). It has been approved by the U.S. Food and Drug Administration for treatment of adults with severe sepsis and re-sulting acute organ dysfunction who are at high risk of death. It acts as an antithrombotic, anti-inflammatory, and profibrinolytic agent. Its most common serious side effect is bleeding. Therefore, it is contraindicated in patients with active internal bleeding, re-cent hemorrhagic stroke, intracranial surgery, or head injury.

Aggressive nutritional supplementation is critical in the manage-ment of septic shock because malnutrition further impairs the pa-tient’s resistance to infection. Nutritional supplementation should be initiated within the first 24 hours of the onset of shock (Mizock, 2000). Enteral feedings are preferred to the parenteral route be-cause of the increased risk of iatrogenic infection associated with intravenous catheters; however, enteral feedings may not be possi-ble if decreased perfusion to the gastrointestinal tract reduces peri-stalsis and impairs absorption.

The nurse caring for any patient in any setting must keep in mind the risks of sepsis and the high mortality rate associated with sep-tic shock. All invasive procedures must be carried out with aseptic technique after careful hand hygiene. Additionally, intravenous lines, arterial and venous puncture sites, surgical incisions, trau-matic wounds, urinary catheters, and pressure ulcers are moni-tored for signs of infection in all patients. The nurse identifies patients at particular risk for sepsis and septic shock (ie, elderly and immunosuppressed patients or patients with extensive trauma or burns or diabetes), keeping in mind that these high-risk patients may not develop typical or classic signs of infection and sepsis. Confusion, for example, may be the first sign of infection and sep-sis in elderly patients.

When caring for the patient with septic shock, the nurse col-laborates with other members of the health care team to identify the site and source of sepsis and the specific organisms involved. Appropriate specimens for culture and sensitivity are often ob-tained by the nurse.

Elevated body temperature (hyperthermia) is common with sepsis and raises the patient’s metabolic rate and oxygen con-sumption. Fever is one of the body’s natural mechanisms for fighting infections. Thus, an elevated temperature may not be treated unless it reaches dangerous levels (more than 40C [104F]) or unless the patient is uncomfortable. Efforts may be made to reduce the temperature by administering acetaminophen or applying hypothermia blankets. During these therapies, the nurse monitors the patient closely for shivering, which increases oxygen consumption. Efforts to increase comfort are important if the patient experiences fever, chills, or shivering.

The nurse administers prescribed intravenous fluids and med-ications, including antibiotic agents and vasoactive medications to restore vascular volume. Because of decreased perfusion to the kidneys and liver, serum concentrations of antibiotic agents that are normally cleared by these organs may increase and produce toxic effects. Therefore, the nurse monitors blood levels (anti-biotic agent, BUN, creatinine, white blood count) and reports in-creased levels to the physician.

As with other types of shock, the nurse monitors the patient’s hemodynamic status, fluid intake and output, and nutritional sta-tus. Daily weights and close monitoring of serum albumin levels help determine the patient’s protein requirements.