In addition to caring for the patient through different stages of shock, the nurse needs to tailor interventions to the type of shock, whether it is hypovolemic, cardiogenic, or circulatory shock.

In addition to caring for the patient through different stages of shock, the nurse needs to tailor interventions to the type of shock, whether it is hypovolemic, cardiogenic, or circulatory shock.

Hypovolemic shock can be caused by external fluid losses, such as traumatic blood loss, or by internal fluid shifts, as in severe de-hydration, severe edema, or ascites (Chart 15-3). Intravascular volume can be reduced both by fluid loss and fluid shifting be-tween the intravascular and interstitial compartments. 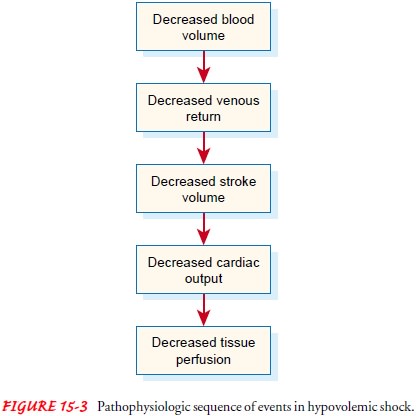 Major goals in treating hypovolemic shock are to (1) restore in-travascular volume to reverse the sequence of events leading to inadequate tissue perfusion, (2) redistribute fluid volume, andcorrect the underlying cause of the fluid loss as quickly as pos-sible. Depending on the severity of shock and the patient’s con-dition, it is likely that efforts will be made to address all three goals simultaneously.

TREATMENT OF THE UNDERLYING CAUSE

If the patient is hemorrhaging, efforts are made to stop the bleed-ing. This may involve applying pressure to the bleeding site or surgery to stop internal bleeding. If the cause of the hypovolemia is diarrhea or vomiting, medications to treat diarrhea and vomit-ing are administered as efforts are made simultaneously to iden-tify and treat the cause. In the elderly patient, dehydration may be the cause of hypovolemic shock.

Beyond reversing the primary cause of the decreased intravascular volume, fluid replacement (also referred to as fluid resuscitation) is of primary concern. At least two large-gauge intravenous lines are inserted to establish access for fluid administration. Two intra-venous lines allow simultaneous administration of fluid, medica-tions, and blood component therapy if required. Because the goal of the fluid replacement is to restore intravascular volume, it is nec-essary to administer fluids that will remain in the intravascular com-partment and thus avoid creating fluid shifts from the intravascular compartment into the intracellular compartment. Table 15-2 summarizes the fluids commonly used in treating shock.

Lactated Ringer’s and 0.9% sodium chloride solutions are iso-tonic crystalloid fluids commonly used in treating hypovolemic shock ( Jindal et al., 2000). Large amounts of fluid must be ad-ministered to restore intravascular volume because isotonic crys-talloid solutions move freely between the fluid compartments of the body and do not remain in the vascular system.

Colloids (eg, albumin, hetastarch, and dextran) may also be used. Dextran is not indicated if the cause of the hypovolemic shock is hemorrhage because it interferes with platelet aggregation.

Blood products, also colloids, may need to be administered, particularly when the cause of the hypovolemic shock is hemor-rhage. Because of the risk of transmitting bloodborne viruses and the scarcity of blood products, however, these products are used only if other alternatives are unavailable or blood loss is extensive and rapid. Packed red blood cells are administered to replenish the patient’s oxygen-carrying capacity in conjunction with other fluids that will expand volume. Current recommendations are to base the need for transfusions on the patient’s oxygenation needs, which are determined by vital signs, blood gas values, and clini-cal appearance rather than using an arbitrary laboratory value. Synthetic forms of blood (ie, compounds capable of carrying oxy-gen in the same way that blood does) are potential alternatives.

In addition to administering fluids to restore intravascular vol-ume, positioning the patient properly assists fluid redistribution. A modified Trendelenburg position (Fig. 15-4) is recommended in hypovolemic shock. Elevating the legs promotes the return of venous blood. Positioning the patient in a full Trendelenburg po-sition, however, makes breathing difficult and therefore is not recommended. 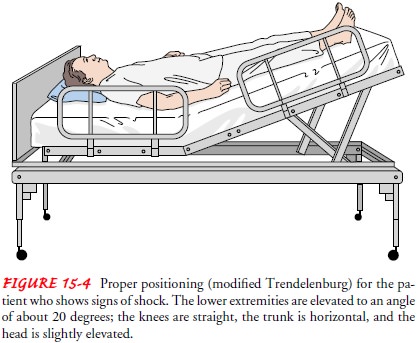 If the underlying cause of the hypovolemia is dehydration, medications are also administered to reverse the cause of the de-hydration. For example, insulin is administered if dehydration is secondary to hyperglycemia; desmopressin (DDAVP) is admin-istered for diabetes insipidus, antidiarrheal agents for diarrhea, and antiemetic medications for vomiting.

Primary prevention of shock is an essential focus of nursing inter-vention. Hypovolemic shock can be prevented in some instances by closely monitoring patients who are at risk for fluid deficits and assisting with fluid replacement before intravascular volume is de-pleted. In other circumstances, hypovolemic shock cannot be pre-vented, and nursing care focuses on assisting with treatment targeted at treating its cause and restoring intravascular volume.

General nursing measures include ensuring safe administra-tion of prescribed fluids and medications and documenting their administration and effects. Another important nursing role is monitoring for signs of complications and side effects of treat-ment and reporting these signs early in treatment.

Administering blood transfusions safely is a vital nursing role. In emergency situations, it is important to obtain blood specimens quickly to obtain a baseline complete blood count and to type and cross-match the blood in anticipation of blood transfusions. The patient who receives a transfusion of blood products must be monitored closely for adverse effects.

Fluid replacement complications can occur, often when large volumes are administered rapidly. Therefore, the nurse monitors the patient closely for cardiovascular overload and pulmonary edema. The risk of these complications is increased in the elderly and in patients with pre-existing cardiac disease. Hemodynamic pressure, vital signs, arterial blood gases, hemoglobin and hemat-ocrit levels, and fluid intake and output are among the parameters monitored. The patient’s temperature should also be monitored closely to ensure that rapid fluid resuscitation does not precipi-tate hypothermia. Intravenous fluids may need to be warmed during the administration of large volumes. Physical assessment focuses on observing the jugular veins for distention and moni-toring jugular venous pressure. Jugular venous pressure is low in hypovolemic shock; it increases with effective treatment and is significantly increased with fluid overload and heart failure. The nurse needs to monitor cardiac and respiratory status closely and report changes in blood pressure, pulse pressure, heart rate, rhythm, and lung sounds to the physician.

Oxygen is administered to increase the amount of oxygen car-ried by available hemoglobin in the blood. A patient who is con-fused may feel apprehensive with an oxygen mask or cannula in place, and frequent explanations about the need for the mask may reduce some of the patient’s fear and anxiety. Simultane-ously, the nurse must direct efforts to the safety and comfort of the patient.