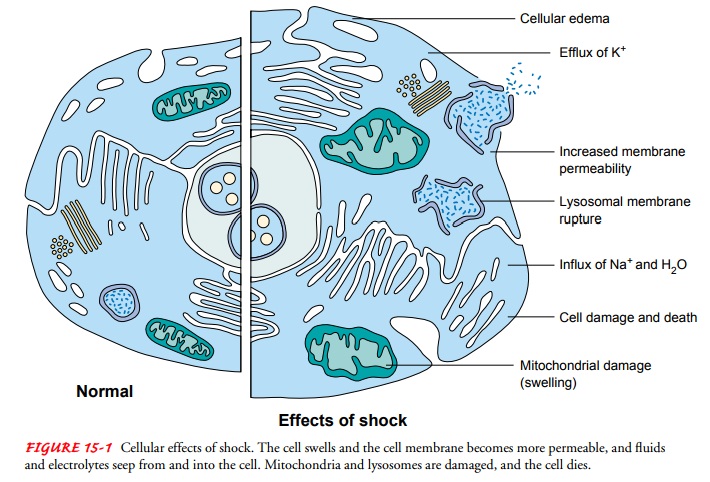 Shock can be classified by etiology and may be described as (1) hypovolemic shock, (2) cardiogenic shock, or (3) circulatory or distributive shock.

Shock can be classified by etiology and may be described as (1) hypovolemic shock, (2) cardiogenic shock, or (3) circulatory or distributive shock. Some authors identify a fourth category, obstructive shock, that results from disorders that cause mechanical obstruction to blood flow through the central circulatory system despite normal myocardial function and intravascular volume.

Examples include pulmonary embolism, cardiac tamponade,dissecting aortic aneurysm, and tension pneumothorax. In this discussion, obstructive disorders are discussed as examples of non-coronary cardiogenic shock. Hypovolemic shock occurs when there is a decrease in the intravascular volume. Cardiogenic shock occurs when the heart has an impaired pumping ability; it may be of coronary or noncoronary origin. Circulatory shock results from a maldistribution or mismatch of blood flow to the cells.

Energy metabolism occurs within the cell, where nutrients are chemically broken down and stored in the form of adenosine triphosphate (ATP). Cells use this stored energy to perform necessary functions, such as active transport, muscle contraction, and biochemical synthesis, as well as specialized cellular functions, such as the conduction of electrical impulses. ATP can be synthesized aerobically (in the presence of oxygen) or anaerobically (in the absence of oxygen). Aerobic metabolism yields far greater amounts of ATP per mole of glucose than does anaerobic metabolism and, therefore, is a more efficient and effective means of producing energy. Additionally, anaerobic metabolism results in the accumulation of the toxic end product lactic acid, which must be removed from the cell and transported to the liver for conversion into glucose and glycogen.

In shock, the cells lack an adequate blood supply and are deprived of oxygen and nutrients; therefore, they must produce energy through anaerobic metabolism. This results in low energy yields from nutrients and an acidotic intracellular environment. Be-cause of these changes, normal cell function ceases (Fig. 15-1). The cell swells and the cell membrane becomes more permeable, allowing electrolytes and fluids to seep out of and into the cell. The sodium-potassium pump becomes impaired; cell structures, primarily the mitochondria, are damaged; and death of the cell results. 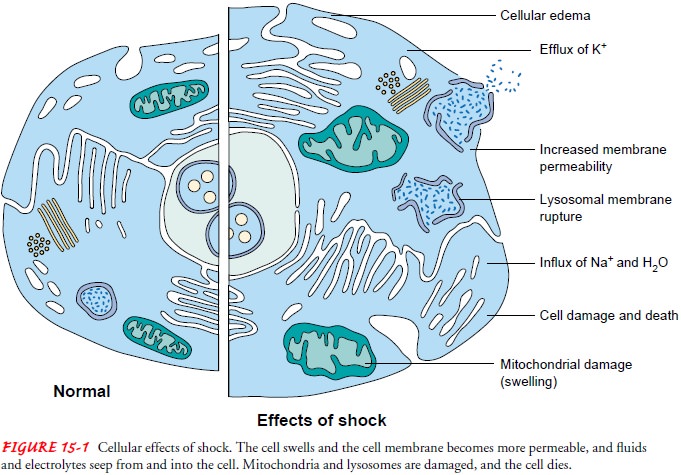 Oxygen attaches to the hemoglobin molecule in red blood cells, and the blood carries it to body cells. The amount of oxygen that is delivered to cells depends both on blood flow to a specific area and on blood oxygen concentration.

Blood is continuously recycled through the lungs to be reoxygenated and to eliminate end products of cellular metabolism, such as carbon dioxide. The heart muscle is the pump that propels the freshly oxygenated blood out to the body tissues. This process of circulation is facili-tated through an elaborate and dynamic vasculature consisting of arteries, arterioles, capillaries, veins, and venules. The vasculature can dilate or constrict based on central and local regulatory mech-anisms. Central regulatory mechanisms stimulate dilation or constriction of the vasculature to maintain an adequate blood pressure. Local regulatory mechanisms, referred to as autoregula-tion, stimulate vasodilation or vasoconstriction in response to bio-chemical mediators (also called cytokines) released by the cell, communicating its need for oxygen and nutrients ( Jindal, Hol-lenberg & Dellinger, 2000) A biochemical mediator is a substance released by a cell or immune cells such as polymorphonuclear leukocytes (PMNs) or macrophages; the substance triggers an ac-tion at a cell site or travels in the bloodstream to a distant site, where it triggers action.

Blood pressure is regulated through a complex interaction of neural, chemical, and hormonal feedback systems affecting both cardiac output and peripheral resistance. This relationship is ex-pressed in the following equation:

Tissue perfusion and organ perfusion depend on mean arte-rial pressure (MAP). The MAP is the average pressure at which blood moves through the vasculature. Although true MAP can be calculated only by complex methods, Chart 15-1 displays a con-venient formula for clinical use in estimating MAP. MAP should exceed 70 to 80 mm Hg for cells to receive the oxygen and nu-trients needed to metabolize energy in amounts sufficient to sus-tain life (Balk, 2000a). 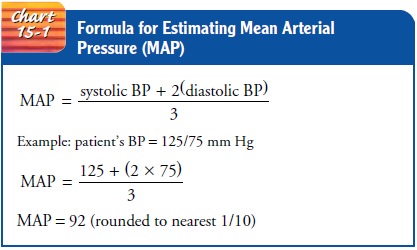 Blood pressure is regulated by the baroreceptors (pressure re-ceptors) located in the carotid sinus and aortic arch. These pressure receptors convey impulses to the sympathetic nervous center in the medulla of the brain. When blood pressure drops, catecholamines (epinephrine and norepinephrine) are released from the adrenal medulla of the adrenal glands. This increases heart rate and vaso-constriction, thus restoring blood pressure. Chemoreceptors, also located in the aortic arch and carotid arteries, regulate blood pres-sure and respiratory rate using much the same mechanism in re-sponse to changes in oxygen and carbon dioxide concentrations in the blood. These primary regulatory mechanisms can respond to changes in blood pressure on a moment-to-moment basis.

The kidneys also play an important role in blood pressure reg-ulation. They regulate blood pressure by releasing renin, an en-zyme needed for the conversion of angiotensin I to angiotensin II, a potent vasoconstrictor. This stimulation of the renin-angiotensin mechanism and resulting vasoconstriction indirectly lead to the release of aldosterone from the adrenal cortex, which promotes the retention of sodium and water. The increased concentration of sodium in the blood then stimulates the release of antidiuretic hormone (ADH) by the pituitary gland. ADH causes the kidneys to retain water further in an effort to raise blood volume and blood pressure. These secondary regulatory mechanisms may take hours or days to respond to changes in blood pressure.

To summarize, adequate blood volume, an effective cardiac pump, and an effective vasculature are necessary to maintain blood pressure and tissue perfusion. When one of the three com-ponents of this system begins to fail, the body is able to compen-sate through increased work by the other two (Fig. 15-2). Whencompensatory mechanisms can no longer compensate for the failed system, body tissues are inadequately perfused, and shock occurs. Without prompt intervention, shock progresses, resulting in organ dysfunction, organ failure, and death.