There are five sense organs in the human body. It includes, • Skin • Eye • Ear • Tongue • Nose

It is an organ of the body which response to external stimuli by conveying impulses through the sensory neuron to the appropriate places within the sensory nervous system.

There are five sense organs in the human body. It includes,

The human skin is the outer covering of the body and is the largest organ of the integumentary system. The main functions are protection, regulation and sensation.

The eye is a sensory organ. It absorbs light rays from our environment and transforms them in such a way that the information in the brain can be processeced further. 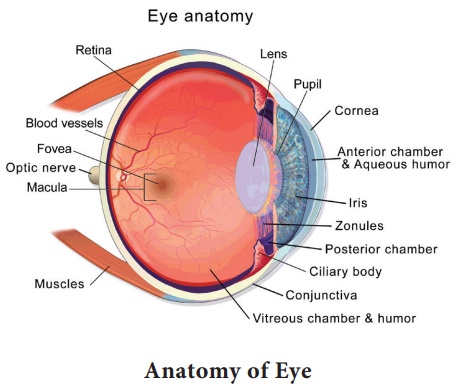 ·              The iris or coloured part, surrounding the pupil. It controls how much light enters the eye by changing the size of the pupil.

·              The retina is a light sensitive inner lining at the back of the eye. Ten different layers of cells work together in the retina to detect light and turn it into electrical impulses.

·              The retina has special cells called cones and rods are located in the retina. These all are known as photoreceptors and help absorb light.

Functions [Physiology] of the Eye

5.            On the way to the retina, light passes through a thick, clear fluid called a vitreous humour. The vitreous humor fills the eyeball and helps maintain its round shape.

6.            The light then reaches the back of the eyes and hits the retina. The retina translates the light into electrical impulses which are then carried to the brain by the optic nerve.

Finally, the visual cortex of the brain interprets these impulses at what we see. 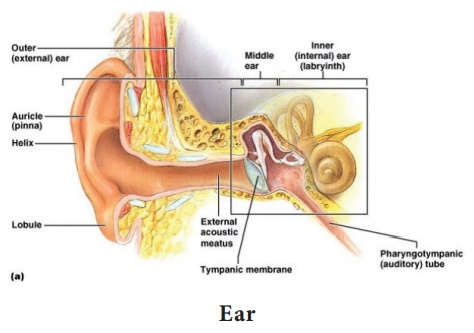 The ear is the organ for hearing. It is divided into three parts.

The curved formation on the outside [the pinna] helps funnel sound down the ear canal to the ear drum.

Acts as a funnel and leads to the ear drum. which protects the eardrum from shock and intrusion by external objects.

·              It is very sensitive, even the slightest pressure variation will cause it to vibrate.

It transfer the energy of a sound wave by vibrating the three bones found there.

Ossicles:- smallest bone of the body. Ear bones are malleus, incus and stapes.

It has two main parts.

This is a spiral that is covered in a stiff membrane. It contains thousands of hair cells attached to the end of the organ of the auditory nerve called organ of corti. These tiny hairs bend because of the vibrations caused by the sound waves.

The vibration from the hairs stimulated tiny nerve cells. The nerve cells then send signals along the auditory nerve to the brain.

Any source of sound sends vibrations or sound waves in to the air. These funnel through the ear opening, down the ear canal and strike eardrum acquiring in to vibrate. The vibrations become nerve impulses and transported to the brain, which interprets the impulses sound [music, voice, etc.]

Tongue is a muscular organ situated in the floor of the mouth. It is associated with the function of taste, speech, mastication, degurtition.

Parts of the tongue 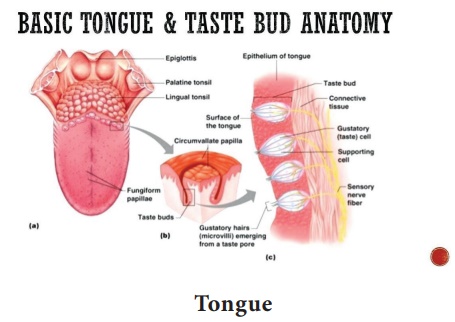 There are two groups of muscles of the tongue.

1. Four intrinsic - alter the shape of the tongue and not attached to the bone.

2. Four paired extrinsic muscles- change the position of the tongue and are anchored to the bone.

The tongue upper surface is covered by taste buds housed in numerous lingual papillae. It is responsible for taste.

The organ of smell is located in the middle of the face. The internal part of the nose lies above the roof of the mouth.

The nose consists of external nose and nasal cavity both are divided by the septum into right and left.

Functions of the nose

It has olfactory receptor neuron and it is responsible for sense of smell.

The normal speech is produced with pressure from the lungs, this can be modified using airflow through the nose in a process called nasalization.