Respiratory system provides the body with oxygen required to sustain life and to eliminate carbon dioxide.

Air is breathed in through the nose or the mouth. In nasal cavity, a layer of mucus membrane acts as a filter and traps pollutants and other harmful substances found in the air. Next air moves in to the pharynx, a passage that contains the intersection between the oesophagus and the larynx. The opening of the larynx has a special flap of cortilage the epiglottis that opens to allow air to pass through but closes to prevent food from moving in to the airway. 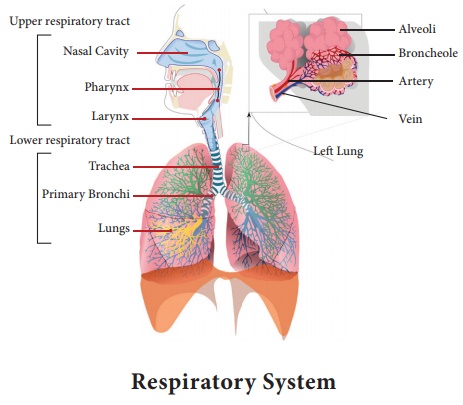 A nostril is one of the two channels of the nose from the point where they bifurcate to the external opening. 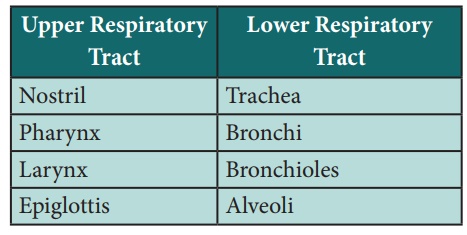 Pharynx is the part of the throat. It is situated at behind the nasal cavity, besides the larynx, and above the oesophagus. It has three part, they are nasopharynx, oropharynx and laryngopharynx.

Epiglotis is a flap in the throat. It is present between the pharynx and larynx. It helps to prevent the food from entering the windpipe [trachea] and the lungs. It is made up of elastic cartilage covered with a mucus membrane attached to the entrance of the larynx. 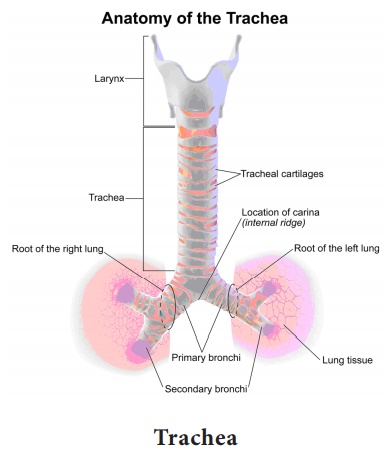 Trachea called as windpipe, is a cartilaginous tube that connects the pharynx and larynx to the lungs allowing the passage of air.

The lungs are the primary organs of the respiratory system. Human lungs are conical in shape and spongy organ. Right and left lung are situated in the thoracic cavity, either side of the heart, and above the diapharam.

The bronchus is passage of airway in the respiratory system. They conducts air in to the lungs. It is divided in to primary, secondary, and tertiary bronchi.

They are bronchus of the bronchi. The bronchioles further divided in to smaller terminal bronchioles. 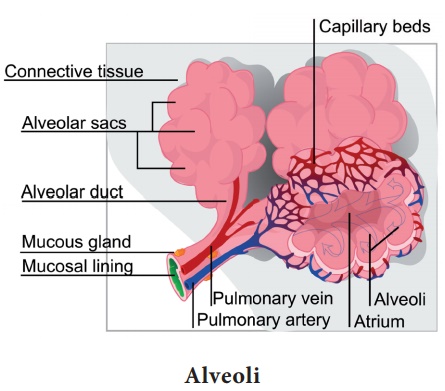 Each alveolus is surrounded by numerous capillaries and is the site of gas exchange by diffusion.

The respiratory cycle includes two phases, inspiration or inhaltion of oxygen and expiration or exhalation of carbon dioxide.

The lungs expand with inspiration and deflate and relax during expiration. Both the expansion and contraction of the lungs are aided by the muscular diaphragm and the intercostal muscles.

Disease of the respiratory tract