The nervous system sends messages to all parts of the body and receives it.

The nervous system is the most complex of all the systems which coordinates controls and enables all body functions like movement, thinking, autonomic, or automatic, reflexes and sensory perception. The nervous system sends messages to all parts of the body and receives it. For example, when a person touches fire, the message is sent to the brain which interprets and sends a message to the person’s finger to suddenly remove it.

The Parts of the Nervous System 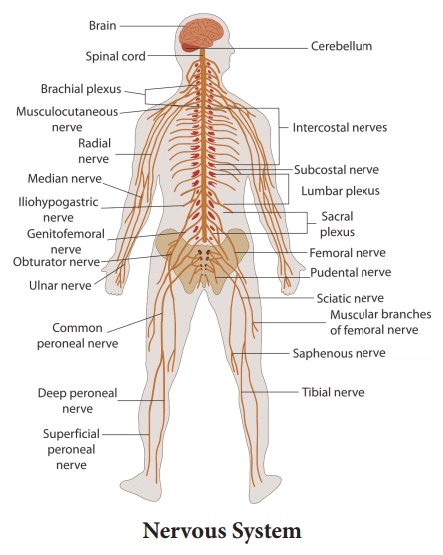 The parts of the central nervous system are the

The brain is placed inside a skull or cranium which protects it. The brain consists of three major parts, two hemispheres (right and left hemisphere) and meninges, the protective membrane.

The meninges have three layers (PAD)

The spinal cord is covered with meninges. The subarachnoid space (space between the arachnoid layer and the pia mater) contains the cerebrospinal fluid.

CSF fluid is a clear, colorless body fluid found in the brain and spinal cord. It is about 125ml of CSF at any one time and about 500ml is generated everyday.

CSF acts as a cushion or buffer for the brain, providing basic mechanical and immunological protection to the brain inside the skull.

The brain is also divided into three major areas 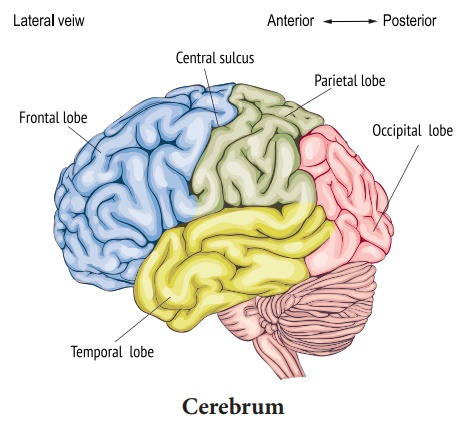 The cerebrum has four major lobes which, as shown in the picture above, are:

The frontal lobe is responsible for thinking, movement, judging and writing.

The temporal lobe plays a role in terms of memory and hearing. 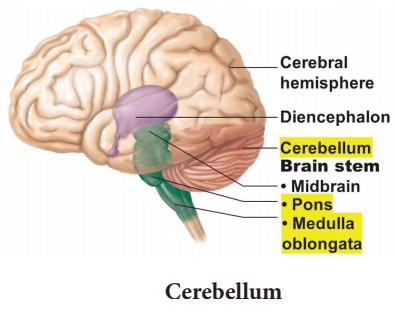 The brain stem lies at the base of the skull and between the right and left hemispheres of the brain.

The brain stem has three sections

The midbrain controls messages sent from other higher areas of the brain to the pons and medulla below it and it also controls posture.

The pons connects the midbrain and the medulla. The pons controls the rhythm of respirations.

The medulla oblongata connects the pons and the spinal cord through a hole in the base of the skull called the foramen magnum. The medulla is the center of control for breathing and cardiac functioning and manages swallowing, vomiting, cough, and sneeze reflexes.

The spinal cord is divided into different parts, which are: 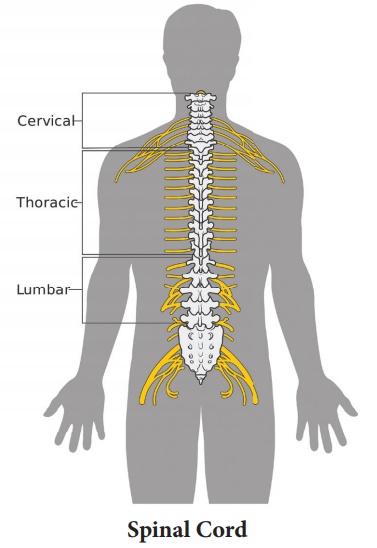 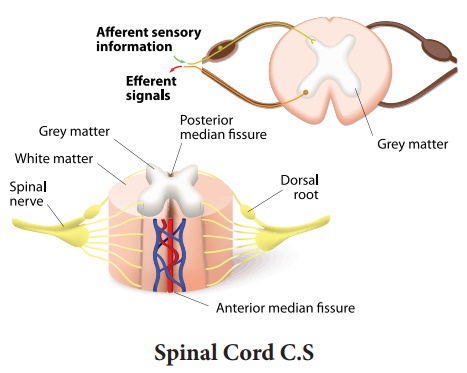 The spinal cord has 31 nerve clusters which sends and receives motor and sensory messages to and from the rest of the body and it coordinates reflex action.

The Parts of the Peripheral Nervous System

The peripheral nervous system is divided into two:

The autonomic nervous system controls automatic and involuntary physiological functions of the body that are out of our control like the movements of smooth, involuntary muscles. For example, the constriction of the eye’s pupil when it is exposed to bright light.

The autonomic nervous system’s functions can be further divided into:

Sympathetic nervous system is responsible for the fight and flight syndrome that results from stress. These responses include an increased heart rate, pupil dilation and decreased peristalsis.

A reflex is a muscle reaction that automatically occurs in response to a stimulus.

There are two types of reflexes.

Reflexes present at the time of birth, but disappear shortly thereafter.

·              Glossopharyngeal: taste impulses and the secretion of saliva from the parotid gland.

·              Vagus: respiratory and the digestive systems such as the pharynx and swallowing.

The nervous system is comprised of millions of neurons and glial cells. 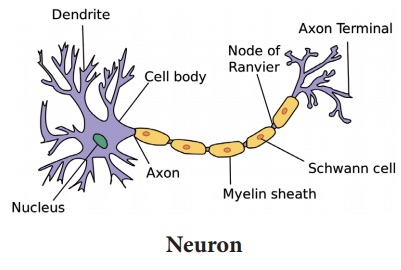 The neuron is the primary type of nerve cell in the nervous system. Glial cells forms myelin sheath over the neuron for protection.

Glial cells are non-neuronal cell that provide support and nutrition, maintain homeostasis, form myelin and patricipate in signal transmission in the nervous system.

Sensory or aﬀerent nervesWhen action potentials are generated by sensory receptors on the dendrites of these neurons, they are transmitted to the spinal cord by the sensory nerve fibres. The impulses may then pass to the brain or to connector neurons of reflex arcs in the spinal cord motor or efferent nerves.

Motor nerves originate in the brain, spinal cord and autonomic ganglia. They transmit impulses to the effectors organs muscles and gland. There are two types: