Osteocytes are the building blocks of the bone and form the inner matrix of bone tissue that gives strength to bones.

Osteoclasts maintain the integrity and strength of the bones.

Osteoblasts build new bones by producing collagen and minerals so that the osteocyte can remain in good functioning condition.

Stem cells form in the inner surface of the bone will later transform into osteoblasts.

Lining cells protect the bones and they also release calcium into the blood when the blood calcium levels are low.

Types of the bones

1. Long bones: Present in the arms and legs. They act as levers to move parts

2. Flat bones: These includes the ribs, scapulae, sternum, and bones of the cranium

3. Irregular bones: These bones are seen in face and spine bones.

4. Short bones: These bones are seen in wrist and ankle bones.

5. Cortical bone: the stronger bone that is needed for support and movement.

6. Axial bones: Found in the skull, the ribs and the spinal column

7. Appendicular bones: found in the arms,legs, shoulders and the pelvis.

8. Cancellous bone or spongy bone: not as strong as cortical bone.

The skeleton is compossed of 206 separate bones in an adult. The cartilages and ligaments helps to unite the bones at the joint 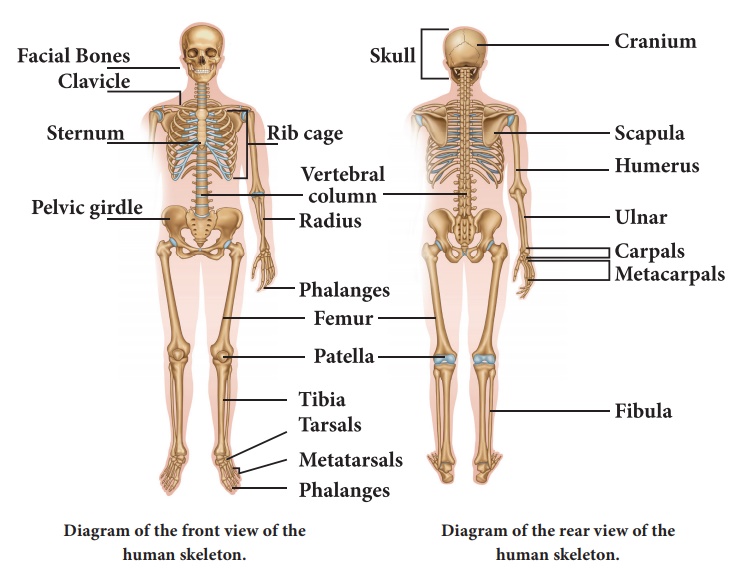 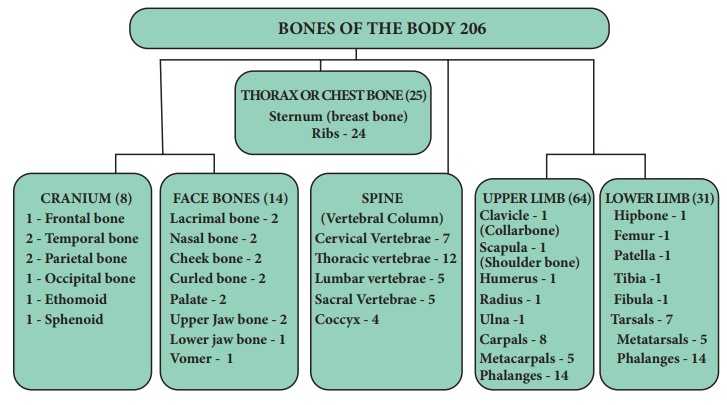 The skull is a body structure that forms the head. It supports the structure of the face and provides a protective cavity of the face.

The skull consists of two parts 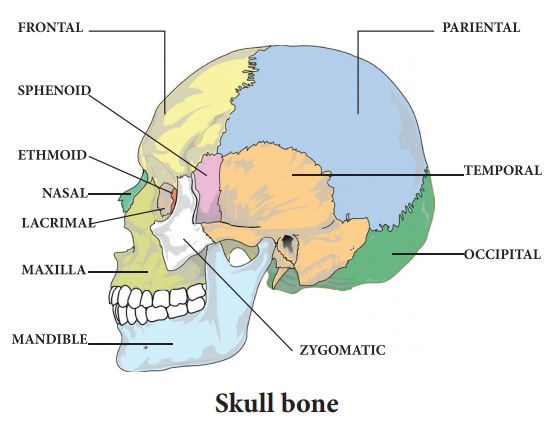 The cranium (skull) is the skeletal structure of the head that supports the face and protects the brain. It is subdivided into the facial bones and the brain case, or cranial vault. The facial bones underlie the facial structures, form the nasal cavity, enclose the eyeballs, and support the teeth of the upper and lower jaws. The rounded brain cases surrounds and protects the brain and house the middle and inner ear structures.

In the adult, the skull consists of 22 individual bones, 21 of which are immobile and united into a single unit. The 22nd bone is the mandible (lower jaw), which is the only moveable bone of the skull.

The Cranium is made up of eight bones as follows: 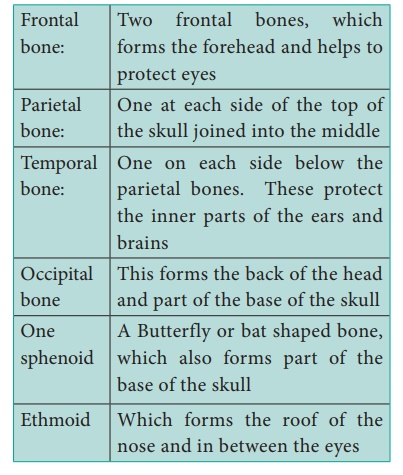 The face has the following 14 bones 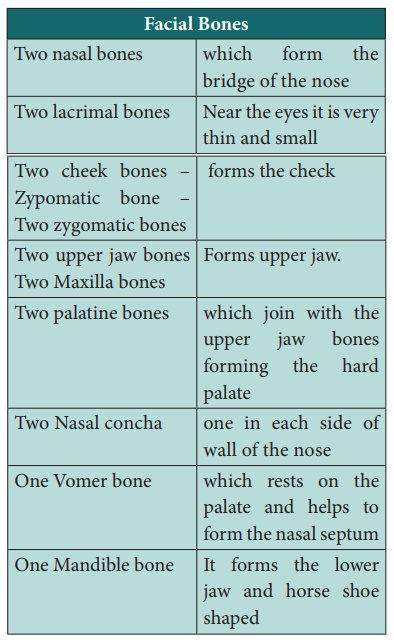 The vertebral coloum, also known as the back bone or spine, is part of the axial skeleton. It separated by intervertebral disc.

Spine or Vertebral column is the central part of the skeleton. It supports the head and encloses the spinal cord. It consists of 33 irregular bones called “vertebrae”

The parts of the vertebral column are as follows:

·               7 Cervical vertebral column in the neck region. The first two bones called atlas and axis are important for nodding and turning the head.

·               5 sacral vertebrae are fused together to form the sacrum, a triangular shaped bone with a hollow anteriorly. The sacrum helps to form the pelvis.

·               4 small vertebrae in the tail region are fused to form a small triangular bone called the coccyx. It is attached to the lower part of sacrum.

The rib cage forms the thorax portion of the body. It consists of 12 pairs of ribs with their costal cartilage and the sternum. The ribs are anchored posteriorly to the 12 thoracic vertebrae. It protects the heart and lungs.

Following are the 3 ear bones

Together they form a short chain that crosses the middle ear and transmit vibrations caused by sound waves from the eardrum to the liquid of the inner ear.

Throat bone (Hyoid bone): is a horseshoe shaped bone situated in the anterior midline of the neck between the chin and the thyroid cartilage.