The role of the male and female reproductive system is to procreate and to provide sexual gratification to the person.

The role of the male and female reproductive system is to procreate and to provide sexual gratification to the person. 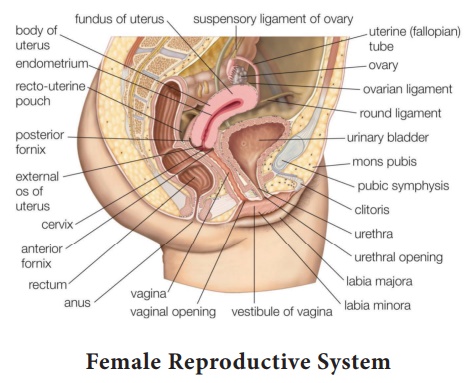 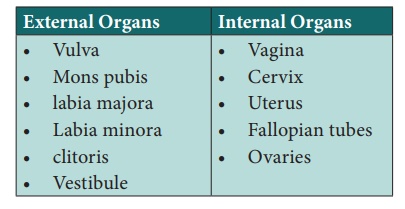 The vulva is the external part of the female genitalia. It protects the woman’s sexual organs urethra, vestibule, and vagina.

The mons pubis is a pad of fat lying in front of the symphysis pubis where pubic hair develops with puberty.

The labia majora are two thick folds which form the sides of the vulva.

The labia minora lies just inside the labia majora and surround the openings to the vagina and urethra.

The clitoris lies above the vagina is covered with a protective cover or hood.

It is a small space or cavity at the beginning of a vaginal canal.

The Vagina is an elastic, muscular canal that extends from the vulva to the cervix. The vaginal canal travels upwards and backwards between the urethra at the front and the rectum at the back.

The outer vaginal opening is normally partly covered by a membrane called the hymen. It joins the internal and external female reproductive organs and protects against infection by a moist secretion.

The cervix is the lower part of the uterus. The lower narrow portion where it joins with the upper part of the vagina. The cervix is usually 2-3 cm long and roughly cylindrical in shape which changes during pregnancy. As labour progresses, the cervix becomes softer and shorter, beings to dilate and facilitate normal labour.

The uterus is a pear shaped muscular organ and the major female reproductive organ. It provides mechanical protection, nutritional support, and removal of the waste for developing embryo and fetus.

It has three layers, they are perimetrium, myometrium and endometrium.

Major functions are to accept a fertilized ovum which becomes implanted into the endometrium, and menstruation.

The ovaries are considered as the female gonade. Each ovary is whitish in colour and located alongside the lateral wall of the uterus. It secretes estrogen, testosterone, Inhibin and progesterone. These hormones are responsible to maintain menstrual cycle, pregnancy and development of breast.

Functions of the female reproductive system

The male reproductive system consists of internal and external organs.

The tip of the penis is protected with foreskin. The penis enlarges and becomes erect with sexual excitation because there is a rich supply of blood.

The scrotum lies bilaterally behind the penis. The scrotal sac holds and protects the testes.

The internal organs are the

The testicles, or testes, lie bilaterally to the penis in the scrotum. The testes are endocrine glands and gonads. 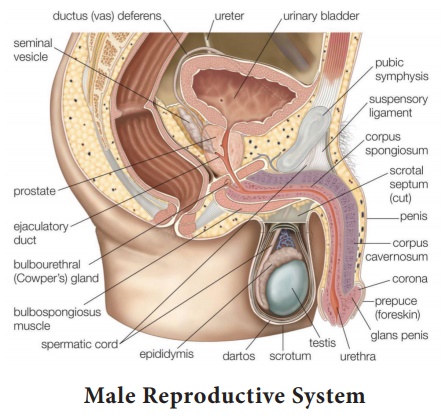 The epididymis is the connecting tube between the testes and the vas deferens which stores, transports and matures the sperm from the testes. The epididymis has three parts such as, the head, body and tail.

The vas deferens moves the mature sperm from the epididymis to the ejaculatory ducts and then to the urethra for ejaculation.

The seminal vesicles are the pair of glands which attach to the vas deferens near and under the bladder. It produces a fructose substance that provides the sperm with the energy it needs to locomote and move through the male reproductive tract.

The prostate is an exocrine gland which secretes an alkaline fluid that preserves the life of the sperm when it hits the acidic female vagina.

The urethra is an organ common for both reproductive system and urinary system.

The primary male reproductive hormones are

Testosterone which leads to the development of primary and secondary sexual characteristics during puberty.