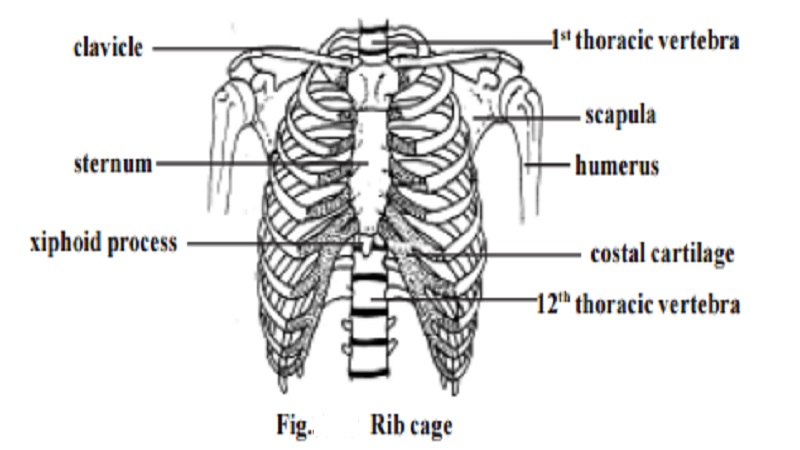 There are 12 pairs of ribs. Each articulates with a thoracic vertebra. In the front, the first ten pairs are attached to the sternum (breast bone) by costal cartilages.

Vertrebra - Structure : The main load - bearing portion of a vertebra is a solid disc of bone called the centrum. The centra of adjacent vertebrae are separated by intervertebral discs of cartilage. Projecting from the centrum dorsally is a vertebral arch. It encloses the neural canal. This canal contains the spinal cord. Several bony projections are seen on the vertebral arch. On each side of the centrum ther are two transverse processes. On the dorsal side there is a neural spine. These bony projections are used for attachment of muscles. Further, there are two superior and two inferior processes meant for articulation with the neighbouring vertebra.

The first cervical vertebra is the atlas. It balances and supports the head. It has no centrum. The second is the axis. The sacral vertebrae are fused. They form a triangular structure called the sacrum. The coccygeal vertelera has no function. It is a vestige. During development in the embryonic stage there are nearby 34 vertebrae present. Of these, 5 sacral bones are fused to form a single sacral bone. 4 or 5 coccygeal bones are fused to form a singlecoccyx.