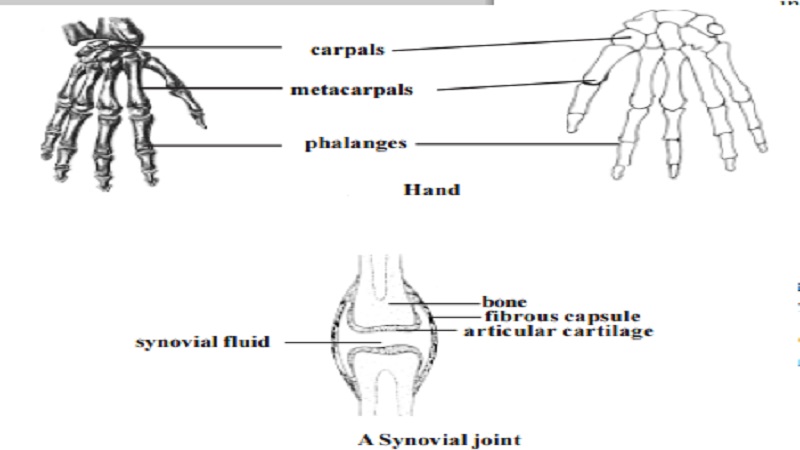 Pectoral girdle - The hands are attached to the pectoral girdle. Both of them are attached loosely by muscles to the body. This arrangement facilitates free-dom of movement. Hence it is possible to place the hand in a wide range of positions.

The pectoral or shoulder girdle consists of two pairs of bones. Each pair has a scapula or shoulder blade and a clavicle or collarbone. The scapula is a flat, triangular bone. A glenoid fossa is located in the superior lateral region of the scapula. It articulates with the head of the humerus. The clavicle is a long bone. It has a slight S-shaped curve. It can be easily seen and felt. The clavicle holds the upper limb away from the body. 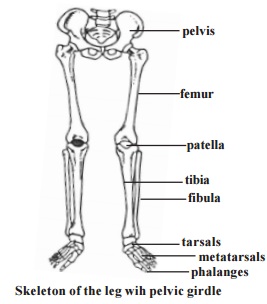 Pelvic girdle or pelvis - It is a ring of bones formed by the sacrum and paired bones called the coxae or hip bones.

Each coxa is formed by the fusion of three bones, namely ilium, ischium and pubis. A fossa called the acetabulum is located on the lateral surface of each coxa. The acetabulum is meant for the articulation of the lower limbs.

Forearm - This part of the hand is in between the arm and the wrist. The forearm has two bones. They are the ulna and the radius. While the ulna is on the side of the little finger, the radius is on the lateral or thumb side of the forearm.

Wrist - This short region is composed of eight carpal bones. These are arranaged into two rows of four each. The carpals along with accompanying ligaments are arranged in such a way that a tunnel on the anterior surface of the wrist called the carpal tunnel has been formed. Tendons, nerves and blood vessels pass through this tunnel to enter the hand. 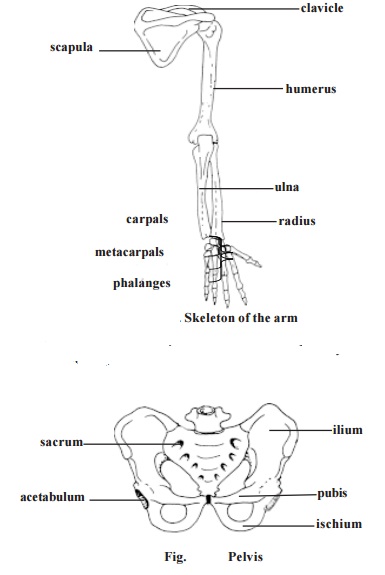 Hand - The bony framework of the hand is formed of five metacarpals. They are attached to the carpals in the wrist. The concave nature of the palm in the resting position is due to curved arrangement of metacarpals.

Each hand has five digits. They include one thumb and four fingers. Each digit has small long bones called phalanges. While the thumb has two phalanges other fingers have three each.

Lower limb or Leg : The general pattern of the lower limb is similar to that of the upper limb.

The upper region of the leg is the thigh. It contains a single longest bone called the femur. It has a prominent rounded head for articulating with the acetabulum of the pelvic girdle. The distal end of the femur has two condyles for articulation with the tibia.

The knee region has a large, flat bone called the patella. It articulates with the patellar groove of the femur.

Leg - The leg is that part of the lower limb between the knee and the ankle. It consists of two bones namely, the tibia and the fibula. The tibia is larger and it supports most of the weight of the leg.

Ankle : The ankle consists of seven tarsal bones. The ankle articulates with the tibia and the fibula through the talus.

All bodily movements are caused by muscles. Our skeletal muscles are firmly attached to bones. Movements involving such muscles cause pull on our bones. Hence movements need movable bone joints.

A joint or an articulation is a place where two bones come together. All joints are not movable. Many joints allow only limited movements.

The joints are named according to the bones that are united.

Kinds of joints - There are three major kinds of joints. They are the fibrous, cartilaginous and synovial joints.

Fibrous joints - In this type, the joints are united by fibrous connective tis-sue. There is no joint cavity. These joints show little or no movement. Suturesformed between cranial bones, a syndesmosis (to bind) between radius and ulna are examples for this type.

Cartilaginous joints - These joints unite two bones by means of either hya-line cartilage (synchondroses) or fibrocartilage (symphyses). The articula-tion between the first rib and the sternum is an example for syncondrosis.

Symphysis pubis and intervertebral discs are examples for symphyses.

Synovial joints - These joints contain a synovial fluid. This fluid is a com-plex mixture of polysaccharides, proteins, fats and cells. It forms a thin lubri-cating film covering the surfaces of a joint. Elbow and knee joints are of this type.