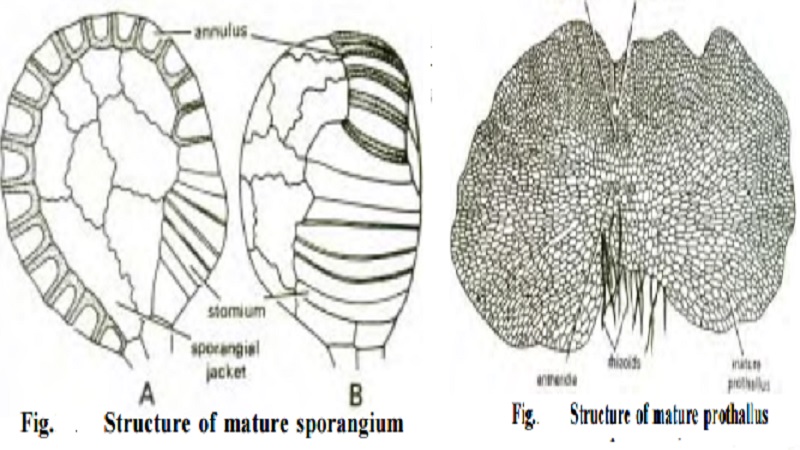 Vegetative reproduction is by death and decay of the underground rhizome. The rhizome is dichotomously branched and grows indefinitely. When the death and decay of rhizome reaches up to the point of dichotomy, both the branches separate and each grows into a new plant.

Reproduction by spores: Sori, formed on the lower side of the mature pinnae, are arranged in two rows; one on either side of the midvein. The sori are groups of sporengia. They are superficial in origin and arise at the tips of veinlets. They are distinct and maintain their individuality. Some species of

Nephrolepis show fusion of adjacent sori. Each sorus has an indusium which covers the sorus. The indusium is reniform i.e., kidney-shaped, roundish or sub-orbicular.

Each sporangium is mounted on a long stender stalk. The annulus consists of thick-walled cells extending from the base to almost three-fourth of the capsule. The distal end of annulus has a strip of thin-walled cells. This region is called stomium. Each sporangium produces 32-64 haploid spores after meiotic division of spore mother cells.

At maturity, the annulus tears the sporangial wall from the stomium and turns backward. This kind of dehiscence leads to the release of spores.

Upon germination, each haploid spore develops into a multicellular chlorophyllous filament. The filament further develops into a flat, green coloured and more or less heart-shaped prothallus or gametophyte. A mature prothallus is 3-8mm in diameter with rhizoids which anchor the prothallus in the soil.

Each mature archegonium is differentiated into neck which is composed of four vertical rows of cells and a basal venter. The venter contains a single large ovum or egg.